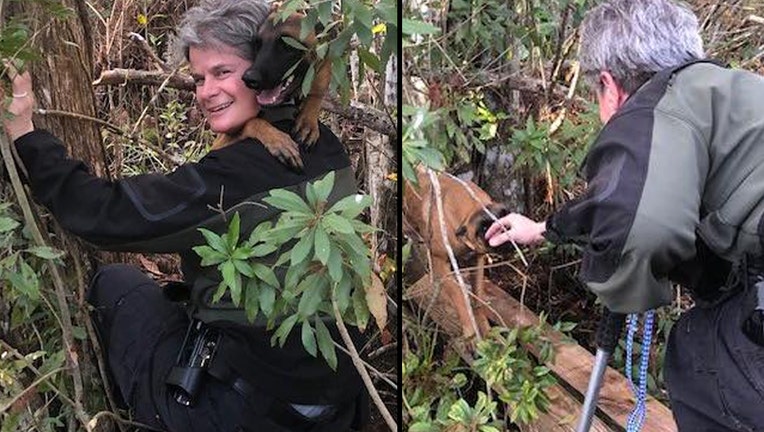 LAKE COUNTY, Fla. - A courageous animal enforcement officer saved a dog trapped on an island that is known to be surrounded by gators, carrying it on her shoulders back to safety, a Florida sheriff's office said.

The Lake County Sheriff's Office said that on January 8th, animal enforcement officer Amy Riccio responded to Bassville Park regarding a call that a dog was trapped on an island, clinging to a log, in a swampy marsh area known to have a lot of alligators.

They said that neighbors were concerned that the alligators would get to the dogs before the animal enforcement officers (AEO) could arrive.

"AEO Riccio immediately began formulating a plan to save the dog and, without hesitation, entered the thick brush of the swamp and used 2x4 boards to build a makeshift bridge to get to the island where the dog was located," deputies said.

Officer Riccio reportedly gained the dog's trust quickly and then carried it on her shoulders, across the unstable bridge, safely being rescued.

The dog was taken to the Lake County Animal Shelter until its owner can be located, the Sheriff's Office said.