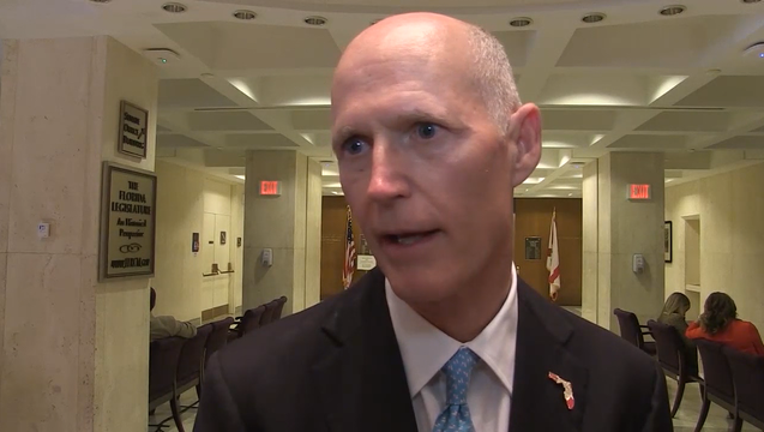 TALLAHASSEE, Fla. (NSF) - Dismissing concerns of a constitutional crisis, lawyers for Gov. Rick Scott on Wednesday asked the Florida Supreme Court to reject a petition that seeks to bar Scott from appointing three new justices on his last day in office.

In a 38-page reply to a filing last month by a pair of voting-rights organizations, Scott's office said the League of Women Voters of Florida and Common Cause jumped the gun by asking the Supreme Court to step in now and referee a simmering dispute.

Scott has asserted that he has the right to appoint replacements for three Supreme Court justices who will leave the court in early 2019 because of the mandatory retirement age for judges.

Those three members --- justices R. Fred Lewis, Barbara Pariente and Peggy Quince --- are part of the court's more-liberal majority, and some advocates are worried that Scott, a Republican, could tip the balance of power on the bench on his final day in office. That prompted the petition from the voting-rights groups, who want to block Scott from doing so and allow the incoming governor to make the appointment.

But Scott's response says the organizations have no right to make that move before the governor actually takes an action that can be challenged.

"Petitioners do not challenge any specific executive action that has been taken by the governor, but rather seek the court's opinion regarding the scope of the governor's executive authority to act in the future under a hypothetical set of facts," attorneys for the governor wrote.

Scott's lawyers also said one of the justices could retire before the last day of their term, as several members of the court have, and that Scott could work out an agreement with his successor. An earlier potential conflict over whether an outgoing or incoming governor had the power to appoint a new justice was defused in 1998. Then-Gov. Lawton Chiles, who like Scott was term-limited, and Gov.-elect Jeb Bush agreed to jointly name Quince to the court.

The key question in the dispute concerns precisely when the terms of Scott and the three justices end. According to the League of Women Voters of Florida and Common Cause, Scott's term comes to an end at the start of Jan. 8, 2019, while the justices' terms expire 24 hours later.

The groups also pointed out that a constitutional amendment specifically allowing the outgoing governor to make the appointments was rejected by voters in 2014.

Scott's office rejected the groups' interpretation, saying that the justices' terms end at the beginning of Jan. 8, while the governor remains in office until his successor takes the oath. That has often --- though not always --- happened around noon, which could give Scott as much as 12 hours to make appointments.

The governor's office cites a 1955 case, which concerns a county court judgeship and suggests that Scott could make the appointments up until his successor is sworn in.

"Rather than acknowledging the plain text of the Florida Constitution and this (Supreme) Court's precedent, the petition relies on the conclusions of opinion columns in newspapers, speculates about the intent of voters regarding a proposed constitutional amendment that did not pass, and argues that general considerations of public policy should dictate a different result," the Wednesday filing says "Petitioners' policy preferences are not the law of this state."

In their filing with the court last month, the voting-rights groups argued that the conflict needs to be sorted out well before a potential constitutional crisis engulfs the judiciary.

"Although the general election is over a year away, there is simply not time for this case to work its way through the circuit court to the district court and back to this (Supreme) Court for final resolution," the petition said. "The importance of deciding this issue before Governor Scott attempts to make the subject appointments cannot be overstated."

They also said a new governor would be more accountable to voters than one who is leaving office.