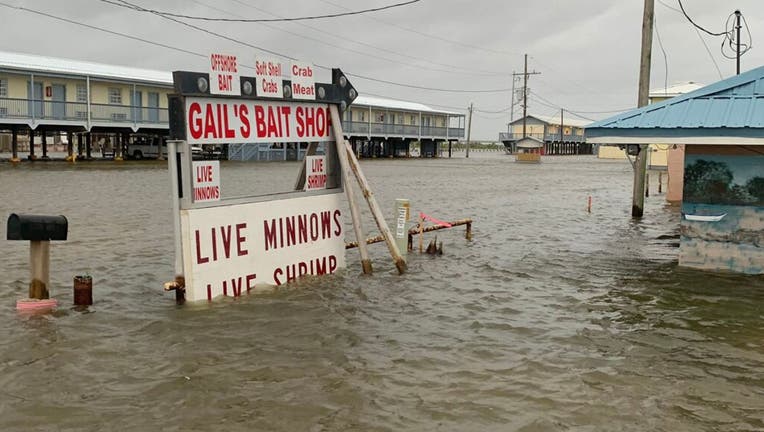 TALLAHASSEE, Fla. - Floridians would be asked to approve a tax break for people who elevate their homes to avoid the threat of flooding, while up to $100 million a year would be set aside to help local governments combat rising sea levels, under proposals announced Friday by House Speaker Chris Sprowls, R-Palm Harbor.

The measures are filed for the legislative session that begins Tuesday and come after Gov. Ron DeSantis proposed providing $1 billion over the next four years to state and local agencies for "resiliency" projects to help combat the effects of climate change.

In announcing the House plan Friday at the University of South Florida’s St. Petersburg campus, Sprowls said the proposals aren’t filled with "bricks and concrete," but "great ideas" from lawmakers and other people "making sure that Florida will become the leader in America in protecting us from flood mitigation and sea level rise."

"While some continued to debate word choices, we're rolling up our sleeves and focusing on real problems that affect real business owners and real homeowners in our community," said Sprowls, who was among the first Republicans to publicly address climate-change impacts at the end of former Gov. Rick Scott’s second term.

The House is looking to budget $25 million next fiscal year and establish a program to help local governments cover costs of addressing flooding and sea level rise. The plan, which would set up the Resilient Florida Trust Fund within the Department of Environmental Protection, calls for funding to jump to $100 million annually starting in the 2022-2023 fiscal year.

The House plan and DeSantis’ proposal include some key differences.

DeSantis calls for spending $25 million during the upcoming 2021-2022 fiscal year, but that money would be used for debt service to issue bonds. He would increase the state funding by $25 million a year the next three years as part of long-term bonding.

DeSantis would use money from documentary stamp taxes on real-estate transactions. State voters in 2014 directed a third of the so-called "doc stamp" money go to land and water conservation. The governor’s proposal would run the money through a non-profit entity that would be called the Resiliency Florida Financing Corp.

While the funding source for the House plan still needs to be worked out as lawmakers put together the 2021-2022 budget, the House doesn’t call for bonding the money. House leaders have been averse to incurring long-term debt through issuing bonds.

The House proposal, which Sprowls called a "suite of bills," also would set up a three-year Statewide Flooding and Sea Level Rise Resilience Plan that the Department of Environmental Protection would update annually.

Also, the proposal would ask voters in 2022 to approve a constitutional amendment that would provide a property-tax break when residents elevate homes to avoid the impacts of flooding and rising seas. Under the proposal, such improvements would not be considered in determining assessed values of homes for tax purposes.

"Homeowners who are taking proactive measures to protect their property from flooding should not only be rewarded, but they should be incentivized," said Rep. Linda Chaney, a St. Pete Beach Republican, sponsoring the proposed constitutional amendment and an accompanying bill (HJR 1377 and HB 1379).

The House plan also would require the Department of Environmental Protection to conduct a statewide assessment of flood risks, encourage local governments to set up regional coalitions on resilience issues and establish at USF the Florida Flood Hub for Applied Research and Innovation to address flooding and sea-level rise issues.

"Our regional efforts have led the way in responding to flooding and sea level rise, and we are committed to supporting them," said Rep. Demi Busatta Cabrera, a Coral Gables Republican who will help carry the legislation. "No matter where you live in Florida. We want you to have the best information and innovation to address these problems."

"It is mandatory that we have substantial and urgent action to reduce our reliance on dirty fossil fuels and transition us to a clean, renewable energy future," said Jonathan Webber, deputy director of the Florida Conservation Voters. "No matter how much money the state invests in flooding and infrastructure, we cannot adapt ourselves out of climate change."

Yoca Arditi-Rocha, executive director of the non-profit CLEO Institute, which works on climate-change issues, called the House proposal a good first step but said the effort remains "reactionary, not proactive."

"Our leaders must take the necessary steps to not only address these impacts, but more importantly, acknowledge and address the root cause of this problem." Arditi-Rocha said in a statement.

Asked Friday about what in the proposals would address the causes of climate change, Sprowls replied that the media often likes to engage in "the hyper-politicization of the environment."