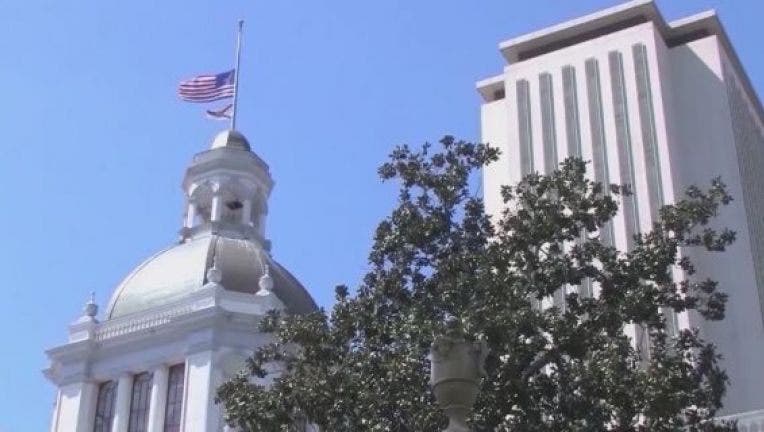 TALLAHASSEE, Fla. - With Democrats decrying the "eleventh-hour" move, the Florida House and Senate on Wednesday revived and passed a controversial plan that would ban transgender female athletes from competing on high-school girls’ and college women’s sports teams.

The House tucked the transgender athlete proposal into an education measure and sent the revamped bill to the Senate. The Senate signed off on the proposal in a 23-16 vote late Wednesday, with one Republican --- Gayle Harrell of Stuart --- crossing party lines to join Democrats in opposition to the bill.

Under the measure on its way to Gov. Ron DeSantis, female students’ eligibility for sports teams would be based on their "biological sex" on birth certificates issued "at or near the time of the student’s birth."

A stand-alone Senate bill aimed at preventing transgender athletes from competing on girls’ and women’s teams stalled last week. But the issue re-emerged Wednesday as an amendment to the education bill (SB 1028) and quickly passed.

The transgender athlete issue has sparked some of the most fierce debates of the 2021 legislative session, with critics arguing that a ban would target youths who are already at risk for suicide, ostracizing, and bullying.

Sen. Victor Torres, D-Orlando, said he has a transgender granddaughter who has faced numerous obstacles as she matured. He urged his colleagues to oppose the proposed ban Wednesday.

"We don’t need to destroy the lives of those children and their futures. If they want to play, let them play," he said. "We don’t need this. We thought it was dead. But obviously, some don’t care. And we have to care."

But Senate Appropriations Chairwoman Kelli Stargel, a Lakeland Republican who sponsored the stand-alone bill that stalled, defended the plan Wednesday, saying it is "common knowledge" that men are stronger than women.

Rep, Kaylee Tuck, a Lake Placid Republican who had sponsored a stand-alone House bill on the issue, offered the amendment Wednesday. The action came with just two days left in the 2021 legislative session.

Stargel’s previous proposal included an exception for "persons who transition from male to female" if they meet certain conditions, such as specified testosterone levels. But she said Wednesday that such an approach was too complicated.

"We decided to go with the most simplistic, which is to say that women play on women’s sports and men are playing on men’s sports. I know it’s unfortunate for the number of students who are transgender, but we’re doing this so that women have the opportunity to participate, to get scholarships, to excel with other women of like strength and capability," she explained.

Through a barrage of questions and a series of futile attempts to alter Tuck’s amendment, House Democrats lashed out at the proposed ban.

"Republican leadership is hellbent on harming transgender youth and kicking kids off of their soccer teams --- and they've resorted to making backroom deals to resurrect and pass this bigoted bill in the final hours of legislative session," Gina Duncan, director of transgender equality for the non-profit organization Equality Florida, said in a statement Wednesday evening.

The bill also includes a provision that would allow "any student who is deprived of an athletic opportunity or suffers any direct or indirect harm" as a result of a violation of the transgender athlete ban to have a private cause of action "for injunctive relief, damages, and any other relief available under law" against a school or public postsecondary institution.

The measure also includes a provision aimed at preventing schools from retaliating against students who report that the transgender athlete ban is being violated.

Florida is among a number of states where Republican lawmakers have considered legislation to ban transgender females from participating on girls’ and women’s high-school and college sports teams. West Virginia Gov. Jim Justice signed a similar bill into law on Wednesday.

Critics of a ban argued that, if enacted, Florida could lose out on lucrative collegiate championship games.

The National Collegiate Athletic Association, the main governing body for college sports, released a statement this month about its affiliation with states considering legislation about transgender student-athlete participation.

"When determining where championships are held, NCAA policy directs that only locations where hosts can commit to providing an environment that is safe, healthy, and free of discrimination should be selected," the statement said in part.

Tuck’s original proposal would have based eligibility on a student’s "biological sex" --- a disputed term that refers to the sex assigned at birth --- and included a dispute process to challenge a student’s eligibility.

Tuck noted Wednesday that the birth certificate is part of a "pre-eligibility" check conducted by the Florida High School Athletic Association.

"There is no longer a dispute process (in the amendment). So the birth certificate is already required in the pre-eligibility check to the FHSAA so there’s not going to be the ability for another student to challenge the biological sex," she said, calling her amendment a "compromise."

But Smith railed at Tuck, saying the "eleventh-hour" amendment came as a surprise and could create "real harm" for kids.

"We are told by the amendment sponsor that the underlying amendment is a compromise," he said. "It’s a compromise … because we are no longer inspecting the genitals of children in our school. Members, not inspecting children’s genitals is not a compromise. The idea that we were doing it in the first place is absolutely insane, and people should be ashamed of themselves."