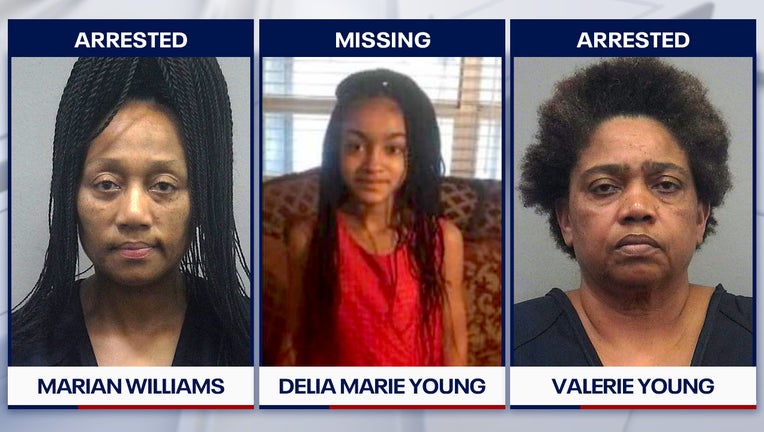 GAINESVILLE, Fla. - The Alachua County Sheriff's Office has made two arrests in a missing person investigation.

Delia Young, 13, is the subject of a Florida Missing Child Alert that was issued on May 20.  Detectives continue to search for Young, who is still considered missing.

Deputies have since arrested Marian G. Williams, 57, and Valerie Young, 52, in connection with the disappearance of the teenager.

Both Williams and Young are being held in the Alachua County Jail awaiting their first appearance before a judge on Friday.

Delia Young was last seen in the area of the 3200 block of Northwest 142nd Avenue in Gainesville, Florida. She was wearing blue pajamas with images of white stars, circular blue sunglasses, and carrying a pink purse with an image of a white unicorn and rainbow on it.  She also has a noticeable callus on her right thumb.

Young is 4 feet, 2 inches tall, and weighs approximately 75 pounds. She has brown hair and brown eyes.

If you have any information on this investigation, please contact the Alachua County Sheriff's Office at 352-955-1818 or 911.