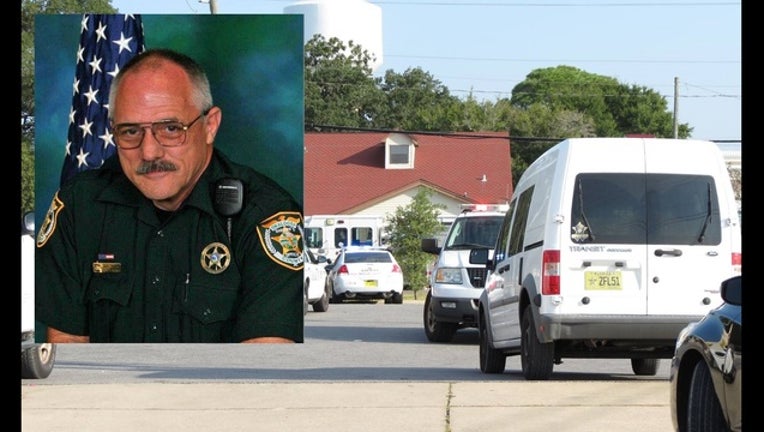 SHALIMAR, Fla. (AP) - Authorities say a Florida Panhandle sheriff's deputy and a suspect are dead following a shooting outside a lawyer's office and a standoff at a nearby hotel.

Myers had met Smith at a Shalimar law office earlier in the day. Officials say Smith was supposed to surrender his firearms following a domestic violence injunction, but Smith instead shot Myers and fled to a hotel where he had been staying.

The sheriff's office says Smith was fatally wounded while exchanging gunfire with deputies during the standoff.

The owner of an awning store near where a deputy was killed says he initially thought there had been a robbery at a nearby Dollar General after hearing seven or eight gunshots.

The deputy was serving a domestic violence injunction on Smith and Smith was supposed to be turning over his guns when the deputy was shot.

Wray spotted Myers' patrol car and ran over with the intention to tell a deputy about the possible robbery but instead saw a wounded Myers.

Wray said he was stooped over Myers when a nicely dressed man walked out of the law office. Wray said he asked the man if anyone had called 911, but the man just continued on to his truck. That's when another woman screamed that the man was the shooter.

Smith was later killed in a shootout with police.

“We are praying for our friend, our co-worker, our community’s selfless public servant as he battles for his life this morning after being shot in the line of duty,” an OCSO Facebook post said. “We also pray for his family and we appreciate all the prayers and support from the public and fellow law enforcement officers and other first responders during this difficult ordeal.”