TAMPA, Fla. - Surrounded by Bay Area sheriffs, Gov. Ron DeSantis suspended the Hillsborough County State Attorney, saying he violated his oath of office and has been soft on crime.

Thursday, Gov. Ron DeSantis announced Andrew Warren's suspension will take effect immediately, saying Warren thinks he’s "above the law" and has been "picking and choosing" which laws to enforce, citing the state's 15-week abortion ban as the most recent example.

"The role of the state attorney is to apply the law and enforce the law, not pick and choose which laws you like and which laws you don't like," he said. "This is a law and order state. We're not going to back down from that one inch. We're not going to allow locally-elected people to veto what our state has decreed through our legislative process."

"When you're saying you're not going to enforce certain laws that you don't like, that's neglect of duty," the governor added, "that quite frankly is incompetence as defined in Florida law."

Warren recently signed a joint letter promising to avoid prosecuting people for providing or seeking abortions. The letter was published in June by the organization Fair and Just Prosecution, which bills itself as bringing together elected local prosecutors to promote "a justice system grounded in fairness, equity, compassion, and fiscal responsibility."

Warren signed the letter along with more than 90 prosecutors from various states, some of which have enacted limitations on abortion similar to the Florida measure. The Florida Legislature passed the 15-week abortion restriction this spring, and DeSantis signed it in April. Providers could face third-degree felony charges for breaking the law.

Hours after Florida Gov. Ron DeSantis announced he was suspending Hillsborough State Attorney Andrew Warren for choosing not to enforce some state laws, Warren shot back, calling the governor's move "illegal overreach" that "spits in the face of the voters of Hillsborough County."

"Not all of us agree on a personal or moral level on the issue of abortion. But we stand together in our firm belief that prosecutors have a responsibility to refrain from using limited criminal legal system resources to criminalize personal medical decisions," the June 24 letter said. "As such, we decline to use our offices’ resources to criminalize reproductive health decisions and commit to exercise our well-settled discretion and refrain from prosecuting those who seek, provide, or support abortions."

The State Attorney in Hillsborough County, Andrew Warren, has pledged not to press charges against those receiving an abortion or their doctors. This comes in the wake of Roe v. Wade being overturned by the Supreme Court, handing the power down to the states on how to handle abortion laws.

DeSantis also targeted Warren for joining a separate letter "condemning the criminalization of transgender people and gender-affirming healthcare" that was published by the organization Fair and Just Prosecution a year ago. The letter also was signed by Monique Worrell, state attorney for Florida’s 9th Judicial Circuit.

The governor said this was a result of a review of all state attorney offices in Florida, adding that he didn't speak to Warren to discuss the findings before issuing the suspension. DeSantis said he made his decision a few days ago.

"It all came back to this area, here in the 13th Judicial Circuit in Hillsborough County. The response that we got was a lot of frustration on the part of law enforcement for criminals being let go and crimes not being prosecuted. We compiled a lot of records, I can tell you it's been a troubling record," DeSantis explained. "This was a statewide review to make sure we were not going down the road of San Francisco."

Chesa Boudin was ousted as a San Francisco district attorney in a June 7 recall election fueled by frustration over public safety. Viral video footage of people shoplifting and attacking seniors, particularly Asian Americans, rattled residents. A new district attorney has since been sworn in, Brooke Jenkins, who quit Boudin's office in 2021 to volunteer for the recall, reports FOX News.

"State Attorneys have a duty to prosecute crimes as defined in Florida law, not to pick and choose which laws to enforce based on his personal agenda. It is my duty to hold Florida’s elected officials to the highest standards for the people of Florida."

Thursday morning's announcement was immediately followed by a call to action by several Bay Area progressive groups angry with the governor's decision. Within hours, they organized a rally outside the Hillsborough County Courthouse.

About 60 people showed up, including Rep. Fentrice Driskell. They not only want to show support for Warren, but also for the LGBTQ community and for reproductive rights.

"It kind of feels like a slight to the voters," said Bernice Lauredan with Dream Defenders. "We all supported Andrew, we voted for him, he won by not a small number. This is authoritarian to remove a democratically elected official from their position."

Warren, a Democrat, lashed out at the move ahead of a Thursday afternoon press conference to address his suspension, accusing the governor of overstepping his authority:

"Today's political stunt is an illegal overreach that continues a dangerous pattern by Ron DeSantis of using his office to further his own political ambition. It spits in the face of the voters of Hillsborough County who have twice elected me to serve them, not Ron DeSantis.

"In our community, crime is low, our Constitutional rights - including the right to privacy - are being upheld, and the people have the right to elect their own leaders - not have them dictated by an aspiring presidential candidate who has shown time and time again he feels accountable to no one.

"Just because the governor violates your rights, it doesn't mean they don't exist."

"There aren't Republican and Democratic victims, just victims," Chronister said. "I continue to work with my law enforcement counterparts who privately are frustrated with the state attorney, who seems intently focused on empathy for criminals and less interested in pursuing justice for crime victims."

Polk Sheriff Grady Judd: 'Innocent people are being murdered where prosecutors don't do their job'

Sheriff Judd described the conversations he had with sheriffs across the country while he was president of the Major County Sheriffs of America.

"You know what they tell me? They tell me we have a dumpster fire going on in this nation. And you know who is getting burned by this dumpster fire? The working people," Judd said. "Innocent people are being murdered where prosecutors don't do their job."

"Let me give you a snapshot of the people that join prosecutor Warren in not enforcing the law," he added, displaying a list of cities where he claimed elected district or state attorneys were also choosing not to prosecute certain laws. 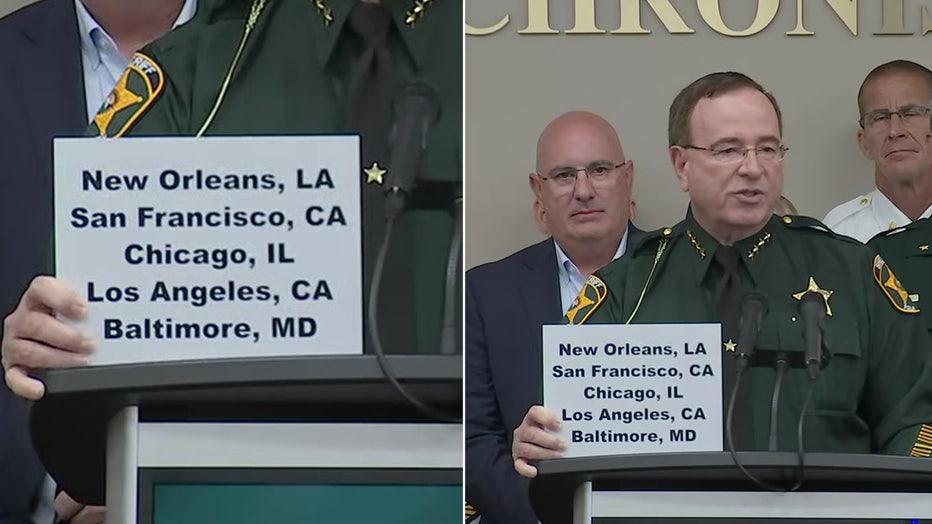 Polk County Sheriff Grady Judd gives a list of U.S. cities where he claims prosecutors were 'not enforcing the law.'

"We should not be here. We should have someone who did their job. The governor should not have to come to Hillsborough County to clean up our mess," said former Tampa police chief, Brian Dugan. "Let me tell you something, Andrew Warren is a fraud. Did you get that? I’ve never been good at sugarcoating anything. He’s a fraud. He has misled the people of Hillsborough County."

Dugan gave the aftermath of the 2020 riots in East Tampa as an example. A few weeks later, Dugan said Warren gave a misleading press conference.

He said there were no acts of violence, no property damage. He must’ve not read the police reports," Dugan said, adding there were photos of damage to police patrol vehicles. "Where I come from, you’re lying. I’m not elected. I was appointed. I’m here because I believe in keeping this community safe."

Dugan went on to say that Warren promised to expunge the 67 arrests made after the riots.

"He does not have the authority," Dugan explained. "How would you like to be one of those 67 people who have been arrested, and you think you’ve been expunged? Not a single arrest has been expunged. He has misled our community. "

Former TPD chief Brian Dugan expressed his frustration with State Attorney Andrew Warren, saying he misled the community and called him a ‘fraud.’

But former Tampa chief of police and current mayor, Jane Castor, disagrees with the decision to suspend Warren from office.

"Removing a duly elected official should be based on egregious actions—not political statements," Castor wrote in a statement on Twitter. "In a free state, voters should choose their elected officials. Tampa remains one of safest cities of its size thanks to the cooperation between our officers & law enforcement partners."

Who will replace Andrew Warren in the meantime?

Lopez was appointed by the governor to serve as a Hillsborough County judge in 2021. She previously served as the Assistant State Attorney in the 13th Judicial Circuit.

"I have the utmost respect for our state laws and I understand the important role that the State Attorney plays in ensuring the safety of our community and the enforcement of our laws," Lopez said in a statement. "I want to thank the Governor for placing his trust in me, and I promise that I will faithfully execute the duties of this office."

Under the state constitution, DeSantis has the authority to suspend state officials "for reasons of misfeasance, malfeasance, neglect of duty, drunkenness, incompetence, permanent inability to perform official duties, or commission of a felony," according to the news release from the governor's office.

"This is a politically motivated attack on a universally respected State Attorney democratically elected to exercise prosecutorial discretion. Ron DeSantis is a pathetic bully. He’s doing this because he wants to be dictator, not a governor of Florida. That’s not how this works, though. This will backfire. We just saw it in Kansas. Florida is a pro-choice, pro-democracy state. If this stands, the people of Florida will put an end to it in November."

U.S. Rep. Charlie Crist, who is also running in the Democratic gubernatorial race, said in a statement:

"The people of Hillsborough elected Andrew Warren not once, but twice, because of his commitment to safety and justice for all people. This action by Governor DeSantis is that of a wannabe dictator who puts partisan politics first. He doesn't give a damn about women or average Floridians. It’s a flagrant abuse of power.

"If Governor DeSantis was truly worried about the people of Florida, he would focus on the affordability crisis that’s crushing our state and squeezing working families."

"I’m not going to mince words: this is a shocking political attack on an elected official serving the people of Hillsborough County. Andrew Warren is being removed because he assured our community that he will not be a foot soldier in Ron DeSantis’ extremist agenda. As anti-abortion radicals try to move us closer to a full abortion ban, he said he wouldn’t prosecute women, or families with LGBTQ+ kids, by interfering with personal decision-making about their health care.

"Every county prosecutor uses their discretion in handling cases in their communities. Andrew Warren was operating fully within the appropriate discretion of his office, and if the people of Hillsborough County don’t like what he is doing, then we can make our voices heard at the ballot box. We did not need the Governor coming down from Tallahassee to punish someone he considers a political enemy. This throws our criminal justice system in Hillsborough County into unnecessary chaos and confusion."