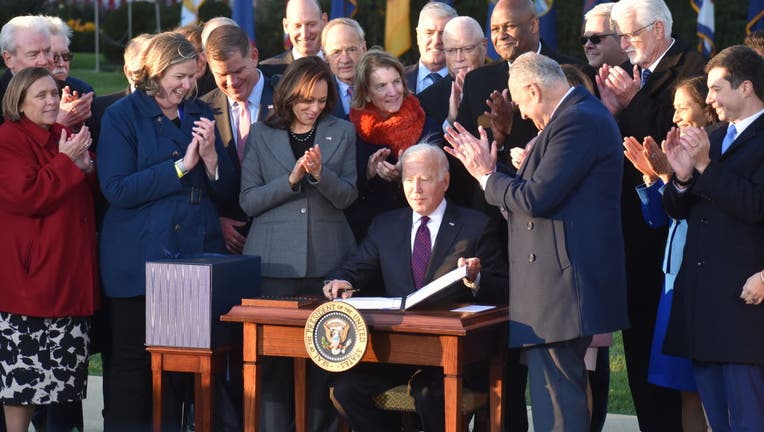 WASHINGTON DC, USA - NOVEMBER 15: President of the United States Joe Biden signs the Bipartisan Infrastructure Deal, H.R. 3684, the âInfrastructure Investment and Jobs Act.â into law at the White House in Washington, DC on November 15, 2021 (Photo b

TALLAHASSEE, Fla. - The Biden administration announced Tuesday that Florida is slated to get $2.65 billion this fiscal year for transportation projects as part of a major federal infrastructure law.

The money is part of $59.9 billion that will be released from the Federal Highway Administration for 12 programs under the $1.2 trillion law signed in November by President Joe Biden. The agency estimates that under the current formula, Florida would receive $13.3 billion for highways and bridges over five years.

"On an average annual basis, this is about 26 percent more than the state’s federal-aid highway formula funding under current law," a report from the agency said.

Portions of the funding, for electric-vehicle charging stations and transportation-resiliency efforts, had already been announced.

For Florida, the biggest chunk this fiscal year, which began Oct. 1 in the federal government, will be $1.45 billion for highway construction through the National Highway Performance Program. Another $704 million will be packaged through the Surface Transportation Block Grant program, which states, and local governments can use to maintain the road, pedestrian, and bicycle infrastructure and for transit projects.

Other examples include $154 million for highway-safety improvements and $52 million to replace, preserve or construct highway bridges.