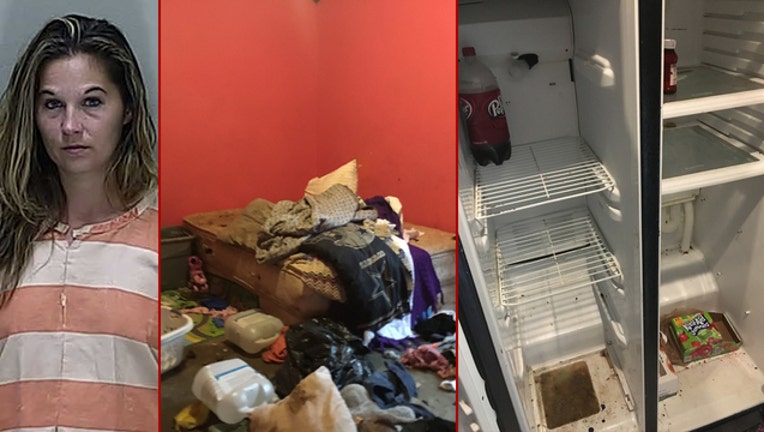 OCALA, Fla. (WOFL FOX 35) - Florida sheriff’s deputies on Wednesday said they arrested a woman who allegedly left six children by themselves at a home whose living conditions were described by authorities as “some of the worst they had ever seen.”

Sara Nicole Resko was hit with six counts of child neglect, the Marion County Sheriff’s Office announced on Facebook, after deputies responded to a call Tuesday about two young kids “wandering in the road” in the Porter Shores neighborhood.

A 2-year-old girl who was not fully clothed, and a 4-year-old boy were found to be “infested with lice and covered with open sores,” the sheriff’s office said.

As deputies worked to determine where the children had come from, they said four other kids, who were later found to be the older siblings, rode by on their bikes. The sheriff’s department said the kids – who were 6, 8, 9 and 13 years old – told them that Resko left them by themselves while she was working.

The residence lacked food, running water and electricity, the sheriff's department said, and the kids slept on bare mattresses on the floor. They said the home was also overrun with flies and littered with dog feces.

The sheriff's department said that "all of the children were infested with lice and covered with open sores."

Resko returned home to find the deputies there and claimed to have only been out “for a few minutes,” the department said. However, they said she adjusted her story after learning that deputies had already been there for more than an hour.

The sheriff’s department said they discovered two prior incidents in April 2017 and February 2018 in which Resko’s kids were “left unsupervised.” On the second occasion, officials with the Department of Children and Families (DCF) “implemented a supervision plan with Resko.”

“Deputies ultimately determined that Resko failed on multiple occasions to provide care and supervision for these children,” the sheriff’s department said, adding that the six kids were placed in DCF custody.