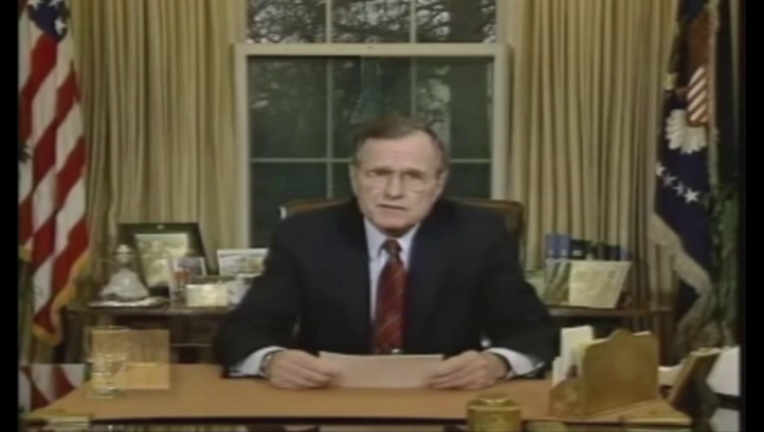 In a presidency replete with accomplishments, George H. W. Bush achieved his most profound success navigating the world's sole super power through a minefield of near perpetual global threats.

“He had a great analytical mind, and he was calm and patient,” University of St. Thomas professor Richard Sindelar says. “He didn’t rush to decisions. He would pause.”

“When the Soviet Union really began to unravel and the wall came down in his presidency, he didn't rush in to suddenly change things in eastern Europe,” Sindelar says. “He said ‘let’s take it a step at a time, be careful, make the right moves,’ and he almost always made the right moves.”

“He was the one who made that transition from the Cold War to a warmer peace and he made it all work,” Sindelar says.

For the 41st president, "the right moves" would continue with a near surgical military removal of Panamanian dictator Manuel Noriega, a drug kingpin threatening access to the vital canal.

"He traversed an extremely difficult time in the foreign policy arena and came out with flying colors,” says Mark Jones, a professor in the Department of Political Science at Rice University.

An era of genuine turbulence which would present the Leader of the Free World with his greatest challenge – the invasion of peaceful Kuwait by Iraqi strong man Saddam Hussein.

"President Bush set a strong precedent that the United States was not going to allow the global oil supply as well as our allies in the Middle East to be threatened by a dictator like Saddam Hussein," Jones says.

In what is known as the 100-hour war, Kuwait was liberated as allied troops drove deep into Iraq, decimating Saddam's military, but stopping short of Baghdad.

With minimal loss of American life and the primary mission accomplished, most hailed the president's restraint as prudent and his decision to wage war, fully justified.

"That was foisted on him. Saddam Hussein brought his own thunder down on his head on that one,” Sindelar says. “He had to do that. You couldn't let the Saudi's fall and you certainly couldn't let stand the blatant intervention and takeover of a whole country.”

At the Gulf War's conclusion, President Bush's approval rating reached an unprecedented 90 percent, a level of popularity constructed on his mastery of foreign affairs, but later diminished by an economic downturn which far too many voters blamed on the president's lack of domestic leadership.

"If the election in 1992 would be decided on foreign policy successes, the end of the Soviet Union, an almost Middle East Peace, Noriega gone, a strategic arms limitation treaty nailed down with the Soviet Union, he would have been a shoe in," Sindelar says.

In the three decades since, most historians fully agree, rating the leader many Texans refer to simply as "41," among the top foreign policy presidents of the 20th century. Worthy praise for a statesman who often shared his heartfelt ambition, "To make kinder the face of the nation and gentler the face of the world."