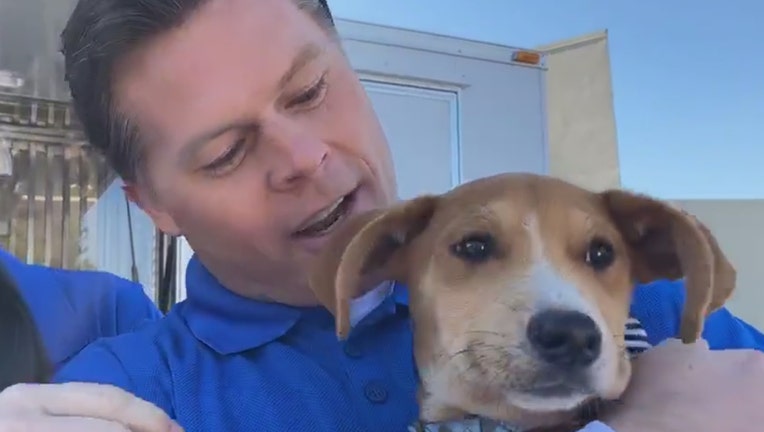 ORLANDO, Fla. - During a segment on Good Day Orlando, a FOX 35 anchor found himself a new best friend.

Super Bowl Sunday kicked off with Good Day Orlando this morning. The show had a 'Fur Bowl' segment that featured puppies and dogs of all ages from the Lake County Animal Shelter. Most of them could be or could soon be adopted. During these segments, FOX 35's Ryan Elijah and puppy Chuck took a liking to each other and became inseparable.

"I had no intentions to take a dog home, but I held him for an hour and then we had a race and I didn't want to put him down," Elijah said. "My wife has wanted another puppy but I thought, no I'm not ready, but Chuck changed that today. He is so sweet."

This is the third rescue that the Elijah family has taken in. They currently have a dog that came to Florida from the Islands following some bad storms.

"If you've never rescued a puppy, there's something so special about," Elijah added. "It will just make your life better."

MORE NEWS: How you can watch the Super Bowl

The Lake County Animal Shelter brought several other dogs to the FOX 35 newsroom. They all can be adopted at the shelter in Tavares.

For more information on how to adopt a dog, visit the Lake County Animal Shelter website.