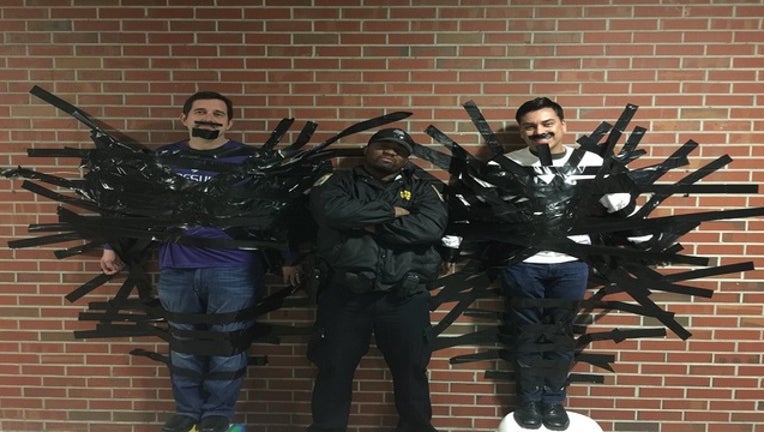 GAINESVILLE, Fla. (WOFL FOX 35) - Gainesville Police posted a picture to Facebook Tuesday. It was at a dance last Friday. The caption reads “Gainesville High School Resource Officer Hutchinson recently kept watch over Principal Shellnut and Mr. Conde after they were duct taped to the wall to raise money for the Shand's Children's Miracle Network.

Jackie Johnson, Director of Communications for Alachua County Schools, said, “I think it’s a very positive thing that the students have decided to get so involved in helping others in the community, particularly sick children. Obviously it was under the supervision of law enforcement. Plenty of adults around. So, it was a very safe and controlled environment.”

She said, “I just thought it was a fun little joke to do. And, it helped raise money, so it wasn’t bad.”

In recent months, at least one teen in Washington State got seriously hurt doing the so-called “Duct-tape Challenge”.

Skylar fish fell and hit and hit his head, while struggling to get out of tape.

The district told Fox 35 no one has raised concerns about this fundraiser involving duct-tape.

Johnson said, “I think what it does is send the message that we’ve got a very committed group of students who care about this community.”

Fox 35’s David Williams asked Gainesville High School students if they were concerned by the event or photo.

Rebecca Lee, 18, said, “I think it’s really cool to raise money for the Children’s Miracle Network. It’s just a fundraiser, so don’t think it should be offensive.”

About the photo, Gainesville Police Spokesman Ben Tobias told Fox 35, “We obviously have no issue, since we posted the photo. GHS was able to raise over $16,000 for a great cause.”

Johnson says students at the school will be doing this fundraiser again soon to support World War II veterans and send them to Washington, D.C. to see the World War II memorial.