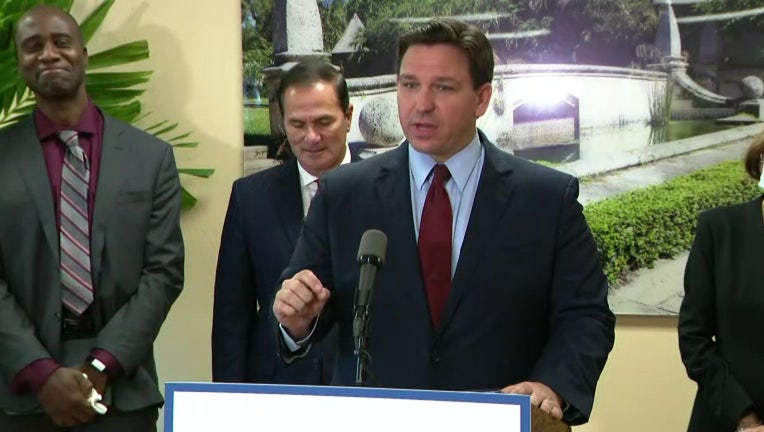 The proposal would require approval from lawmakers during the 2023 legislative session and would be bankrolled through record state budget reserves, DeSantis said.

"We can do this tax relief, really, without breaking a sweat at this point," DeSantis said as he announced the proposal at the Anna Maria Oyster Bar Landside in Bradenton.

The progressive group DeSantis Watch called the proposal a "tax stunt" that wouldn’t provide "real relief in the most unaffordable state in the country for housing."

"Instead of spending the more than $20 billion in budget surpluses on teacher raises, rent relief, or an immediate gas tax cut for Floridians, Ron hoarded the money and let everyday people suffer in order to allow his donors to rake in record profits while he campaigned for higher office," Anders Croy, director of DeSantis Watch, said in a prepared statement.

Floridians "need real relief in the most unaffordable state in the country for housing, and today’s announcement won’t keep a roof over anyone’s head in our state tonight," Croy added.

But DeSantis said the reserves making the proposal possible are a result of Florida having "a lot of great economic activity. Our state policies are reinforcing that."

The proposal would expand parts of a tax package that lawmakers approved this year.

DeSantis also proposed offering sales-tax exemptions for a year on books for readers under age 17, toys for children between ages 2 and 12 and athletic equipment --- from footballs and baseball bats to bicycles and rollerblades --- for kids under 18,

Also, for a year, DeSantis would create sales-tax exemptions on certain household items that cost under $25, such as laundry detergent, toilet paper, paper towels, hand soap and trash bags.

DeSantis also wants taxes lifted for a year on household pet food and would create a permanent tax exemption for over-the-counter pet medications such as products for flea and tick prevention.

Earlier this month, DeSantis said he wants to expand on a current six-month program that gives breaks to certain commuters on tolls. He wants lawmakers to give frequent SunPass and E-Pass users 50 percent monthly credits for a full year.

The toll proposal could affect about 750,000 Floridians who frequently commute and save an average commuter about $550 a year.

Lost transportation funding would be made up by tapping a surplus of state general revenue.