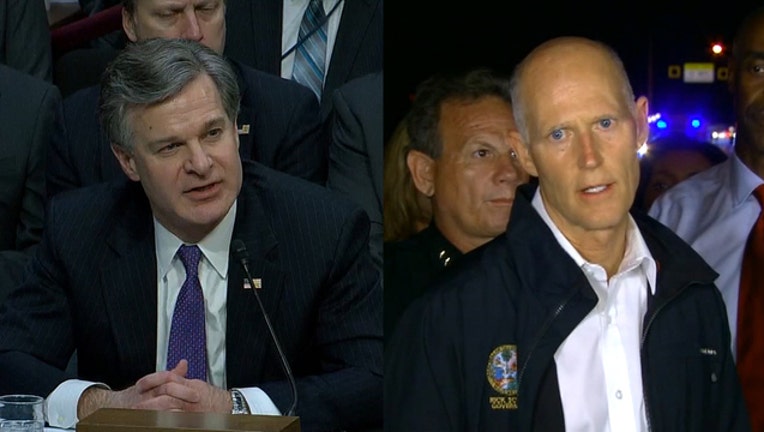 TALLAHASSSEE, Fla. (NSF) - Gov. Rick Scott on Friday demanded FBI Director Christopher Wray resign after the federal agency acknowledged it failed to follow standard procedures after receiving a tip in January about a man charged this week with killing 17 people at a Broward County high school.

Meanwhile, members of the state’s congressional delegation are seeking U.S. House and Senate investigations into the FBI’s handling of the tip, and two Republican state senators want to establish a task force that would look at violence in schools and communities.

Scott called the failure of the FBI to act on a credible tip “unacceptable.”

“Seventeen innocent people are dead, and acknowledging a mistake isn’t going to cut it,” Scott said in a prepared statement. “An apology will never bring these 17 Floridians back to life or comfort the families who are in pain. The families will spend a lifetime wondering how this could happen, and an apology will never give them the answers they desperately need.”

An FBI spokesman said Friday afternoon the agency had no comment on Scott’s demand.

Nikolas Cruz, 19, was arrested Wednesday after a massacre at Marjory Stoneman Douglas High School in Parkland. Cruz was charged Thursday with 17 counts of premeditated murder, while law enforcement continues to gather information about what was the second worst school shooting in U.S. history.

In a rare admission, the FBI issued a news release Friday that said a person close to Cruz had contacted the agency’s public access line on Jan. 5, outlining the man’s gun ownership, erratic behavior, disturbing social media posts, desire to kill people and even the potential to engage in a school shooting.

The news release said the information should have been assessed as a “potential threat to life” and forwarded to the FBI’s Miami field office, which was not done.

Wray, who has been criticized by many Republicans for his agency’s probe of Russian interference in the 2016 elections, said in the release that an investigation is underway into how the tip-line call was handled.

“I am committed to getting to the bottom of what happened in this particular matter, as well as reviewing our processes for responding to information that we receive from the public,” Wray said.

Wray added that members of the agency have spoken to victims and families and “deeply regret the additional pain this causes all those affected by this horrific tragedy.”

“This has been an excruciating few days for the Parkland community. Now, it appears that this tragedy could have been prevented,” Deutch, said in a prepared statement. “The American people should be encouraged to say something if they see something. But we also must be assured that these tips will be processed swiftly and thoroughly so we can avoid future tragedies.”

“The fact that the FBI is investigating this failure is not enough,” Rubio said. “Both the House and Senate need to immediately initiate their own investigations into the FBI’s protocols for ensuring tips from the public about potential killers are followed through. Lawmakers and law enforcement personnel constantly remind the public that 'if you see something, say something.' In this tragic case, people close to the shooter said something, and our system utterly failed the families of 17 innocent souls.”

In the Florida Legislature, Sen. Rene Garcia, R-Hialeah, and Sen. Anitere Flores, R-Miami, asked Senate President Joe Negron on Friday to establish a task force that would look into issues such as mental-health treatment, hardening soft targets such as schools and the possibility of hiring former military members and police officers to patrol education grounds.

“We should not allow the inaction of our federal partners to be the cause of our inaction in addressing the issues of violence in our schools and our community,” Garcia and Flores jointly wrote in a letter. “We must take a holistic approach in addressing these pressing concerns to ensure that we protect all Floridians.”

Garcia and Flores in the past have helped block gun-rights bills in the Senate Judiciary Committee. The committee is scheduled Tuesday to hear a proposal (SB 1236) that would allow school principals or school superintendents to designate people who could carry guns during school hours.

The task force request came as the Second Amendment group Florida Carry urged lawmakers to eliminate “gun-free zones” for people with concealed-weapons licenses and to allow teachers with licenses to carry firearms while in school.

“It is a well-established fact from numerous such events that bad people with guns will only stop their carnage when confronted by an armed response,” Eric Friday, the group’s general counsel, wrote in an open letter. “Every second until that response occurs allows the murderer to kill and maim more innocents.”

Negron, who visited the high school Friday with Senate Minority Leader Oscar Braynon, D-Miami Gardens, Sen. Lauren Book, D-Plantation, and Sen. Gary Farmer, D-Fort Lauderdale, said the Senate will continue to focus on advancing a $13 million increase in the budget, to $78.1 million, for school safety and another $100 million as part of a new category of K-12 school funding specifically to assess and treat mental health.