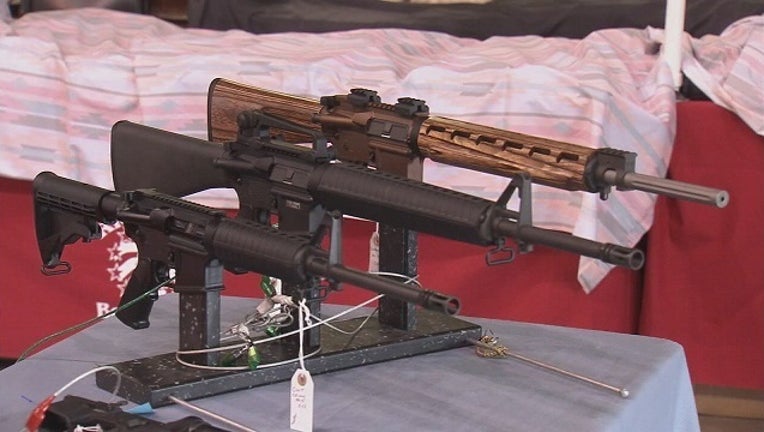 TALLAHASSEE, Fla. (NSF) - Floridians won’t have an opportunity to decide whether the state should ban semi-automatic weapons --- or to weigh in on other gun-related restrictions --- after the Constitution Revision Commission rejected attempts to debate the proposals Wednesday.

Efforts to take up gun-related issues came as the 37-member commission, which meets every 20 years, is narrowing a list of proposed constitutional amendments to place before voters on the November ballot.

A handful of commissioners floated proposals that would impose stricter gun regulations, such as a ban on assault-style weapons, following the Feb. 14 massacre at Marjory Stoneman Douglas High School in which 14 students and three staff members were shot dead by 19-year-old Nikolas Cruz. Cruz, who had a lengthy history of mental health problems, used an AR-15 semi-automatic rifle he purchased legally --- with no waiting period --- to carry out the shooting in Parkland.

Commissioner Roberto Martinez, a former federal prosecutor, proposed an amendment that mirrored gun restrictions imposed by a new Florida law, which raised the minimum age from 18 to 21 and imposed a three-day waiting period to purchase long guns, such as the one used by Cruz. Like the new law, Martinez’s amendment also called for banning “bump stocks,” devices that allow semi-automatic weapons to mimic automatic guns.

While lawmakers passed the age and waiting-period restrictions, putting such measures in the Constitution would make them more permanent --- and harder to change. The Constitution Revision Commission has unique power to place proposals directly on the ballot.

Martinez, a Republican who said he owns three guns, said he met with students from the Parkland school and others while researching the issue.

“They’re not gun-grabbers. But what these students and the young people are asking for are reasonable laws to make sure that guns don’t get into the hands of the wrong people,” Martinez argued. “That’s all they want. And they want an opportunity to vote … to put into our Constitution those same very meaningful and reasonable firearm safety restrictions that are now included in the act.”

But Martinez tried to add the amendment to another commission proposal (Proposal 3) that deals with property rights of certain immigrants. Commissioner Emery Gainey, who works for Attorney General Pam Bondi and was appointed to the constitution-revision panel by Gov. Rick Scott, challenged whether the amendment had anything to do with the underlying proposal.

“I have personally seen the carnage that it (a semi-automatic weapon) does to the human body,” Gainey, who’s spent three decades in law enforcement, said. “I think it’s a discussion that Floridians ought to have. … There’s a proper forum. I don’t think this is it.”

As they did on two other gun-related proposals, a majority of the commission refused to allow a debate on Martinez’s amendment after Rules and Administration Chairman Tim Cerio decided the proposal was “not germane” to the underlying proposal.

“It’s not even a close call,” Cerio, a former general counsel to Scott, said.

Martinez appealed the decision and asked that the rules be waived, because the Feb. 14 shooting occurred after an Oct. 31 deadline for proposals to be submitted.

But Bondi, who serves on the constitution-revision panel, said commissioners had plenty of time to file proposals following the 2016 mass shooting at the Pulse nightclub in Orlando that left 49 people dead.

“To say that the shooting came up recently, well, we had Pulse nightclub a year ago. You’ve all known that from day one.  No one did anything on that,” she said.

But Martinez argued that people should be allowed to “have a voice” and “publicly debate” what has become “the issue of the day” for Floridians.

“There was mention of the awful tragedy at Pulse, where the gay community was targeted. That was an awful massacre. And what did the Legislature do about that? Anybody want to raise their hands? No hands? That’s because they did nothing,” Martinez said.

He urged the commission to echo the actions of “the political leadership of this state” this year, saying Scott and the Legislature had “basically been unshackled to address this issue,” despite pressure from powerful special interests. The National Rifle Association filed a federal lawsuit shortly after Scott signed the new law and has targeted Republican legislators who supported the measure.

“What is the harm done, if we were to go forward, debate this issue and vote on it? I can’t see any harm,” he said. “What is the benefit? The benefit is unlimited.”

The motion to waive the rules failed on a voice vote.

Commissioner Chris Smith, a former state senator from Fort Lauderdale, met with an identical response --- a challenge to germanity --- when he attempted to introduce an amendment that would ban assault-style weapons.

Smith, a Democrat, noted that the Legislature debated the assault-weapons ban during the annual session, which ended March 11.

But Florida voters “want to have a voice on this,” he said.

Wednesday’s CRC actions came after House Speaker Richard Corcoran --- targeted by the National Rifle Association following the passage of the new gun restrictions --- wrote in a letter to commissioners that he had a “grave concern” about amendments “that are inappropriate for inclusion in the state Constitution.”

Firearm policies “are best left to the purview of an elected legislature in a constitutional republic,” the speaker wrote Wednesday morning.

“The Constitution protects the right to keep and bear arms. All firearm policies flow from that fundamental right and should remain policy matters for the Legislature,” Corcoran wrote.

Noting that Corcoran had essentially told the Constitution Revision Commission to mind its own business, Commissioner Hank Coxe, a Jacksonville lawyer, offered a proposal that included a ban on assault weapons and high-capacity magazines and a 10-day waiting period for the purchase of guns.

Coxe, who was appointed by Florida Supreme Court Chief Justice Jorge Labarga, said the commission had signed off on numerous proposals that lawmakers refused to pass --- including a potential ban on greyhound racing and a victim’s rights measure known as “Marsy’s Law.”

“The legacy of the CRC is, as we stand here now given the germanity issue, that we worry about victim’s rights in Marsy’s Law, that we worry about the greyhounds, but, because of adherence to this rule, we do not worry about reducing the number of people murdered in the state of Florida,” Coxe said. “Forget germanity. Just waive the rules.”

But, again on a voice vote, a majority of the commission refused to waive the rules, and Coxe’s amendment failed.