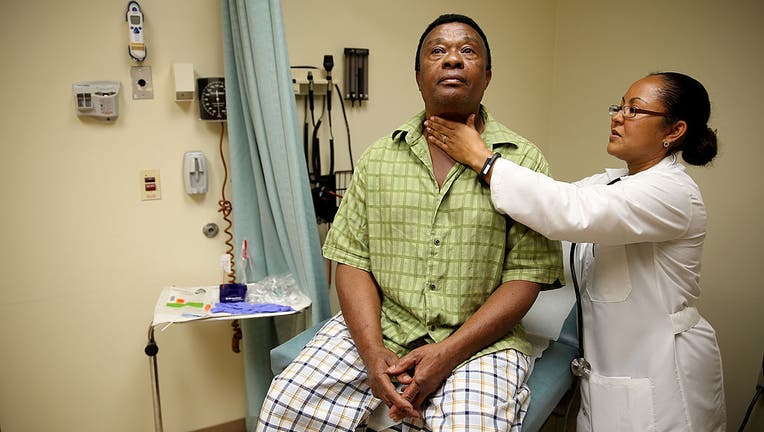 HOLLYWOOD, FL - APRIL 15: Felue Chang who is newly insured under an insurance plan through the Affordable Care Act receives a checkup from Dr. Peria Del Pino-White at the South Broward Community Health Services clinic on April 15, 2014 in Hollywood,

The Centers for Medicare & Medicaid Services released data Thursday showing 871,361 Florida residents had chosen plans between Nov. 1 and Nov. 28. The information does not include people who were automatically re-enrolled in health-insurance plans.

The exchange is part of the federal Affordable Care Act, better known as Obamacare. The number of plan selections among 36 states that rely on the federal insurance exchange totaled 2,903,547 in November. The majority of those selections were made by existing customers. But data show that 659,455 people were newly enrolled in November after not having coverage through the exchange in 2020.

In Florida, 10 insurance companies and HMOs are participating in the exchange this year. Blue Cross and Blue Shield of Florida offers policies in every county, the only carrier to do so. Celtic Insurance Company offers policies in 63 counties but does not offer insurance to residents of Hendry, Martin, Monroe, and Taylor counties.

While more insurance companies are offering plans in 2021, the cost of coverage will be slightly higher, mostly attributable to the COVID-19 pandemic. Florida Insurance Commissioner David Altmaier approved a 3.1 percent increase for 2021 rates.  Enrollment for so-called Obamacare plans began Nov. 1 and will end on Dec. 15.