These were the top 5 internet searches of 2019, according to Google trends

As 2019 draws to a close, here's a look back at the top 5 internet searches of the year, according to Google trends.

LOS ANGELES - 2019 has been a roller-coaster year, bringing everything from devastating natural disasters to a joke-turned-festival at Area 51.

Here’s a look back through the lens of Google trends at the year that caused people the world over to fear for the safety of Notre Dame de Paris, but also to obsess over the introduction of Baby Yoda.

Disney invested billions into its streaming service, Disney Plus, and the platform hit the market with a bang on Nov. 12. — the company reported 10 million subscribers in one day. The streaming service offers a mix of Marvel and Star Wars movies and shows, classic animated films and new series.

Disney Channel actor Cameron Boyce was known for his roles in the Disney franchise “Descendants” as well as the Disney Channel show “Jessie,” and his unexpected death in July sent fans of the 20-year-old star reeling.

Nipsey Hussle, whose real name was Ermias Asghedon, was a Los Angeles native, known outside of his community for his music career as well as his entrepreneurship. He was an artist on the rise from LA’s Hyde Park area, centered around Crenshaw Boulevard. Hussle was beloved for his character as well as the way he invested in his community, and his murder in March not only rocked Crenshaw, but the nation.

The 2019 hurricane season was tumultuous — with 18 named storms, it tied 1969 for the fourth most-lively season in the past 150 years. Mega-storm Hurricane Dorian had the biggest impact after it tore across the Atlantic region, at some points boasting 185-220 mph winds, and leaving a path of destruction and devastation across the Bahamas.

NFL star Antonio Brown was accused of sexually assaulting and raping a former trainer in a lawsuit filed in South Florida in September, which led to the surfacing of another sexual assault accusation from an artist hired by Brown. He played one game this season for the New England Patriots, who released Brown after the accusations went public. 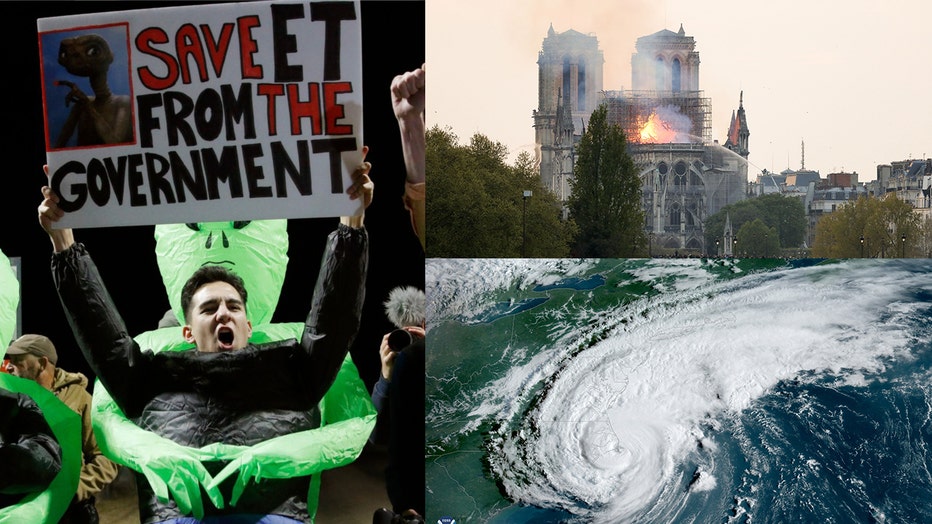 A catastrophic fire engulfed the iconic Notre Dame de Paris Cathedral as it was undergoing renovations in April, threatening one of the greatest architectural treasures of the Western world.

The U.S. Women’s National Soccer team made history when they took home their fourth WWC title — the first time any women’s team has done so. The women of the U.S. team also made headlines for their ongoing battle to receive equal pay.

What began as a joke event on Facebook calling for people to storm the confidential government facility Area 51, because “they can’t stop all of us,” took on a life of its own. More than 1 million people said “yes” to the Facebook event RSVP, and a couple of alien-themed festivals sprung up in the Nevada towns nearest the facility to bring the joke to fruition.

Actor Jussie Smollett first made headlines for claiming he was the victim of a racist and homophobic attack in downtown Chicago in January, but he was later accused of lying to police about the attack.

Comedian Kevin Hart suffered “major back injuries” as a result of a car crash that occurred when his driver veered off a road in the Malibu Hills.

R&B singer R. Kelly was the subject of a Lifetime series expose, “Surviving R. Kelly,” which aired in January that alleged he held women captive and ran a “sex cult.” R. Kelly was accused of sexual assault by multiple women, but denied all allegations.