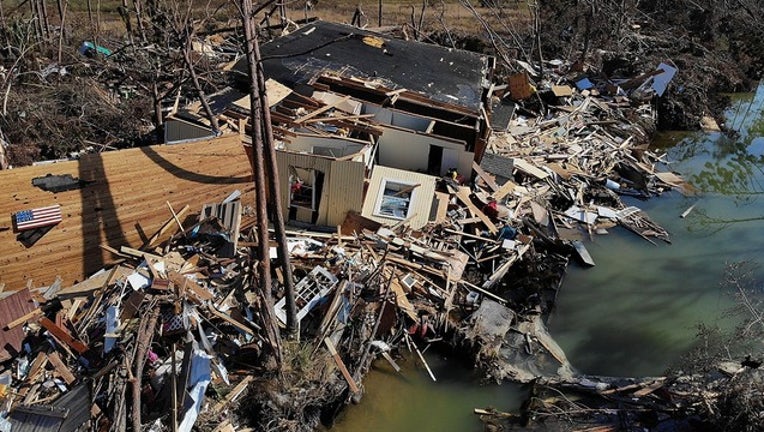 TALLAHASSEE, Fla. (NSF) - For the third consecutive year, after a decade reprieve, Florida in 2018 was tested by the force of a massive hurricane.

The slightly above-average season, which began June 1 and was ending Friday, began early for Florida. Tropical Storm Alberto brought maximum sustained winds of 45 mph to North Florida in late May.

But for the Sunshine State and parts of the nation’s Southeast, the season will be remembered for the powerful and deadly Hurricane Michael, which made landfall Oct. 10 in the Panhandle and traveled into Southwest Georgia with major hurricane- force winds.

Michael didn’t affect as large of an area in Florida as Hurricane Matthew, which ran up the East Coast in 2016, or Irma, which traveled the state from the Keys to Jacksonville in 2017.

But Michael’s impacts will be felt long after the restoration is considered complete.

Fifty days after the storm left parts of Northwest Florida in ruins and drew concerns about the fate of Tyndall Air Force Base, major recovery efforts are ongoing, while officials have yet to put final figures to the damages.

“It is still very early in the recovery process, and those numbers are not available yet,” Florida Division of Emergency Management spokesman Andrew Wilber said Thursday.

Here are some of the numbers and issues emerging from Michael and the 2018 season:

The state Division of Emergency Management put the death count from Michael was 43 as of Monday.

The deaths included at least eight attributed to storm surge, floodwaters or trees falling on homes. Also, five people died while clearing trees. There were also four deaths involving utility workers, with three struck in a single incident by a hit-and-run driver who was ultimately arrested on charges including three counts of vehicular homicide and felony DUI manslaughter.

The state’s death count also includes seniors who died in homes without power, a person who was using a generator near a window while sleeping and a Bay County death listed as “looting incident with police.”

As of Nov. 16 --- the latest numbers available --- 125,356 insurance claims had been filed because of Michael, with total estimated insured losses at $3.43 billion.

By comparison, Irma resulted in more than 1 million claims and $11 billion in estimated insured losses, while hurricanes Matthew and Hermine in 2016 drew nearly 130,000 claims, with losses projected at $1.3 billion. Matthew did not make landfall in Florida but caused damage as it restored up the East Coast, while Hermine hit the Big Bend region.

Citizens Property Insurance spokesman Mike Peltier said Thursday the state-backed insurer remains strong, even with the impact of hurricanes over the past three seasons.

The Florida Department of Agriculture and Consumer Services has estimated Michael’s crop and cattle damages, along with other agricultural impacts, at $1.49 billion.

The hardest-hit segment was the timber industry, accounting for about $1.3 billion in economic losses, while more than 1 million acres of cotton, nuts and vegetables, along with livestock operations, were damaged across 25 counties.

It remains unknown if a federal relief package will come out of Congress for the agriculture industry.

The season included 15 named storms and eight hurricanes, of which two were major hurricanes. It was slightly above average and more active than initially predicted.

Among the statistics of the season.

--- Five named storms were recorded in the Atlantic between Sept. 1 and Sept. 12, matching the 1988 season for the most on record between those dates.

--- Hurricane Michael, with maximums sustained winds of 155 mph, was the first recorded Category 4 storm to land in the Florida Panhandle.

--- Michael’s landfall pressure of 919 millibars --- a key measurement of intensity --- was among the lowest in the continental U.S. The Labor Day Hurricane of 1935 hit 892 mb as it ran across the Florida Keys and up the state’s West Coast. Hurricane Camille hit Mississippi in 1969 at 900 mb.

After Irma, the House set up a select committee to focus on crafting new laws and procedures about hurricane preparations, evacuations and recovery.

Heading into the 2019 legislative session, a similar select committee isn’t expected, though Senate President Bill Galvano said this month that Michael will represent a $1 billion-plus challenge “that will impact our budgetary and policy decisions out of the gate.”

Galvano spokeswoman Katie Betta said Michael-related work can be accomplished by the existing committees. Galvano “continues to discuss these issues with the impacted lawmakers, and certainly they will play a key role in the Senate’s review of hurricane-related matters when the Senate resumes its committee work,” Betta said.

Committees will start meeting in December, with the legislative session starting in March.