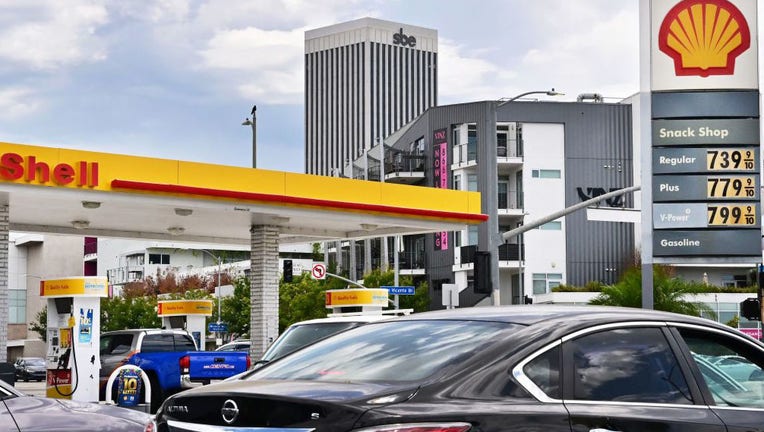 Gas prices are listed at over $7 per gallon in Los Angeles, California on June 22, 2022.(FREDERIC J. BROWN/AFP via Getty Images)

WASHINGTON - Concerns about inflation and personal finances have surged while COVID has evaporated as a top issue for Americans, a new poll shows, marking an upheaval in priorities just months before critical midterm elections.

Forty percent of U.S. adults specifically name inflation in an open-ended question as one of up to five priorities for the government to work on in the next year, according to a June poll from The Associated Press-NORC Center for Public Affairs Research.

That's a sharp rise from 14% in December and less than 1% the year prior. In all, 77% mention the economy in any way, up from 68% in December. But just 10% specifically mention jobs or unemployment, as U.S. employers continue to hire despite high inflation and weak economic growth.

Now, too, Americans increasingly call their personal finances a major issue: 44% mention it, up from 24% in December and 12% the year before. That includes more mentioning gas or energy prices (33% now vs. 10% in December) and food costs (9% vs. less than 1%).

Those shifts may be advantageous to Republicans as they campaign to win control of Congress in this year's midterms; the economy has increasingly been a sore subject for President Joe Biden. Still, the economy isn’t the only issue getting more attention this year.

Many also prioritize issues that are core to Biden and Democrats’ agenda, including abortion, women’s rights and gun policy, which could help Democrats as they try to pad — or at least protect — their razor-thin majority.

In a troubling sign for both parties, the poll finds many Americans say they think neither side of the aisle is better at focusing on the issues important to them or getting things done.

Sara Rodriguez said she’s concerned about the impact of rising prices of goods, gas and oil on her household’s finances, especially because her income isn’t keeping up.

"We’ve had a savings built up and we’re noticing that it’s definitely going down fast because we don’t make enough money to cover how much the cost of everything has risen," the 43-year-old quality control coordinator in Bristol, Connecticut, said.

Rodriguez and her husband and son have had to get to their workplaces and run errands using one car over the last couple of months because of her husband’s broken-down truck.

"We just haven’t had the money to get it back on the road," she said.

The rise in concerns about the economy is paired with a steep decline in the percentage naming COVID-19 as a top issue, even as new variants continue to emerge: Now just 4% mention it, down from 37% in December 2021 and 53% in December 2020.

Republicans are more likely than Democrats to mention inflation or personal finances as top issues, but the sharp changes since December are bipartisan.

Daniel Collier, a 39-year-old construction worker in Waynesville, Missouri, thinks lowering gas prices should be a priority.
"It’s hurt me financially," he said. "I worry about being able to pay the rent, pay utilities."

He blames Biden for inflation and "poor" economic conditions, saying he thinks the president is "incompetent."

The poll shows 69% of Americans disapprove of how Biden is handling the economy, including 93% of Republicans and 43% of Democrats. In May, facing an inflation rate at a 40-year high, most Americans said in an AP-NORC poll that they worried about the impact of higher than usual prices on their finances.

For 22-year-old Jakyra Green, rising prices have been prohibitive.

"It's become very hard to even pay for anything, like rent, gas, and none of our wages are going up," the college student in Goshen, Indiana, said. "I just spend less or try to not go out the house anymore."

But Green identified other issues that concern her more. Abortion has long been on her mind as a priority, and it "feels real now" that the Supreme Court overturned Roe v. Wade. She also identified racism in the U.S. as an important problem.

Mentions of abortion or women’s rights increased sharply to 22% from just 8% in December following the Supreme Court’s decision to strike down Roe v. Wade. The poll shows 12% of U.S. adults mention racial issues, similar to December 2021, but a notable decline from 24% in 2020.

"I have these two compounding identities being Black and a woman," Green said, adding that it's very concerning that Black women experience higher maternal mortality rates than white women. "It’s just so overwhelming right now in America."

Mentions of gun issues also ticked up to 30% from 24% in December 2021 — both significantly higher compared with 5% in December 2020. The 2021 poll was conducted just after a deadly shooting at a Michigan high school.

Charles Hagemeyer sees "so many different issues" facing the country. The economy affects him the most personally, but he called out the mass shooting in Highland Park on July 4 as evidence of a guns problem in the U.S. The poll was conducted before that attack, but after tragedies in Buffalo and Uvalde, Texas.

"Gun violence is another big issue that’s on my mind constantly," the 68-year-old Jacksonville, Florida, resident said. "You’re afraid to go out anymore."

Hagemeyer thinks the country is past the point where gun control legislation could even be effective; still, he doesn’t see lawmakers coming together to solve any problem.

The poll shows a majority of Americans — 57% — don’t think one party is better than the other at getting things done. Thirty-seven percent don’t think either is better at focusing on their priorities; the remainder split about evenly between the two parties. Politics is mentioned in some way as a top problem by 29% of Americans.

"It just doesn’t seem like anybody in government wants to work with each other and try to solve some of the issues that the American people face," Hagemeyer said.

The poll of 1,053 adults was conducted June 23-27 using a sample drawn from NORC’s probability-based AmeriSpeak Panel, which is designed to be representative of the U.S. population. The margin of sampling error for all respondents is plus or minus 4 percentage points.