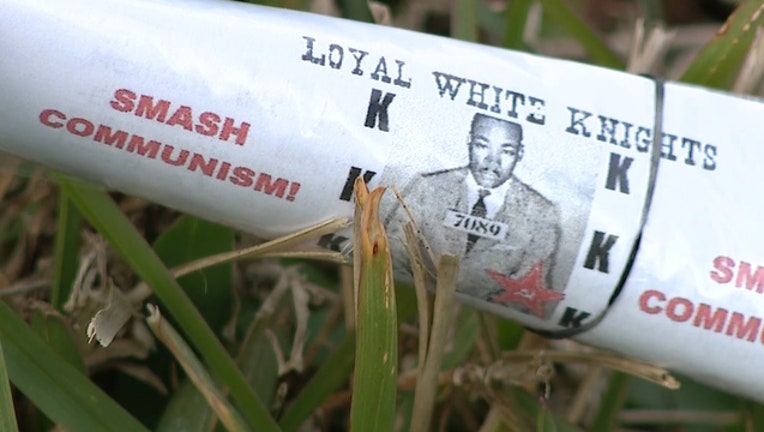 GAINESVILLE, Fla. (WOGX FOX 51) - Residents in one Gainesville neighborhood stepped outside to find propaganda from the Klu Klux Klan on their doorsteps, on Martin Luther King Jr. Day.

According to the Alachua County Sheriff’s Office, the flyers, which were rolled up in plastic bags, were put in front of every home in a neighborhood on the northwest fringe of the city.

"A promotion for the KKK denouncing Martin Luther King and calling him a communist, alcoholic pervert,” said neighbor Mick Marino.

Marino said his wife stepped out Monday morning to get the paper and returned with the fliers and tears in her eyes. The longtime resident posted pictures of the unwanted package on Facebook to make the community aware of the hate that he thinks lurked through their streets overnight.

"It really has depressed, upset us, and outraged us to see this,” he said.

Other neighbors took their own approach to dealing with the shocking find.

Natalie Dean was walking the neighborhood with her son Monday night; their second pass through the street trying to find and dispose of any of the flyers they came across.

"Walking with him around, we picked up over 20 of them, and so we're throwing them out,” said Dean. "They're hoping that they can change some minds and I would like them to go back to the shadows where they belong."

Gainesville Mayor Lauren Poe brought the flyers up during his MLK Day speech Monday; the video posted on his Facebook page Monday night as he condemned the propaganda.

Deputies with the Sheriff’s Office said that this is not the first time flyers like this have shown up in a neighborhood, though they said it is considered free speech and the contents of the fliers did not constitute a crime. A representative for the office said the only crime they could technically get the distributor for is littering.

Deputies recommend anyone who finds the flyers dispose of them in the trash.