Opening statements began on Monday in the murder trial of Markeith Loyd. Loyd is accused of gunning down an Orlando police officer. During a courtroom outburst, Loyd spoke directly to the family of the person he is accused of killing.

ORLANDO, Fla. - Testimony is set to begin on Tuesday in the murder trial for Markeith Loyd.

After two full weeks, a jury of 12 people, plus six alternates, has been selected in the State of Florida versus Loyd in the murder of Orlando Police Lt. Debra Clayton.

The judge, state, and defense made sure to select a racially diverse jury.

Loyd is accused of fatally shooting Orlando Police Lt. Debra Clayton in 2017 as she tried to arrest him outside of a Walmart near Princeton St. and John Young Parkway. He had been on the run after the murder of his ex-girlfriend Sade Dixon.

Back in 2019, a jury convicted Loyd of killing his pregnant ex-girlfriend, Sade Dixon. He was sentenced to life in prison for that crime. 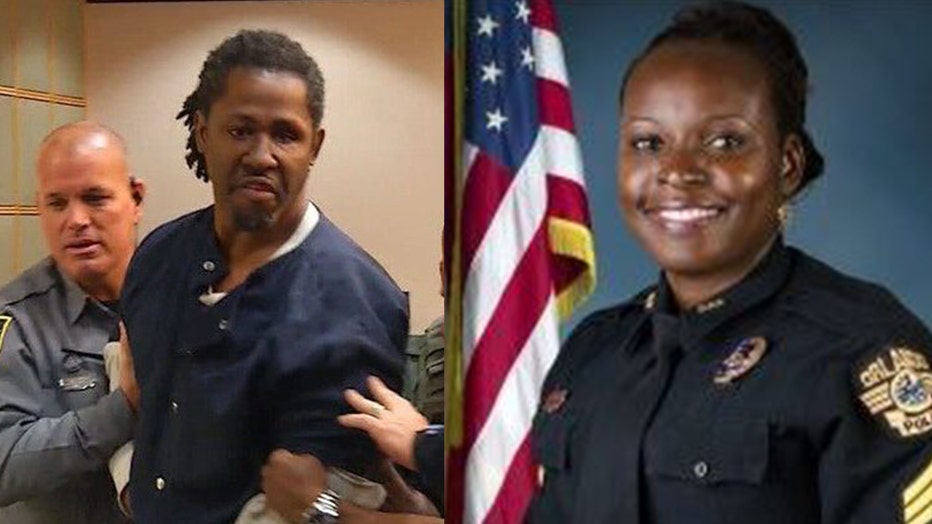 Prosecutor Ryan Williams told the jury that Loyd was on the run and wanted on a warrant for another murder when a woman recognized him in a Walmart check-out line on a cold January morning nearly five years ago.  Williams told the jury moments earlier that woman had seen an Orlando police officer walk out the door, so as soon as she was done checking out, she ran out of the store and told the officer Loyd was inside.

The state has said that Lt. Clayton told Loyd to stop and get on the ground, but instead, she was shot at by Loyd.  Prosecutors said Loyd then got closer, circled, and shot at Clayton three more times.  They said the medical examiner will testify the fatal shot was to her neck.

Loyd’s defense attorney, Terence Lenamon, told prosecutors that his client is a mentally ill man who has always believed the police were out to kill him.  Lenamon told the court that Lt. Clayton fired first and that Loyd -- although a wanted felon – was acting in self-defense.  He also told jurors that his client’s defense is mental insanity.

After the jury left the room for the day, Loyd spoke to Judge Leticia Marques telling her that he was unhappy that his lawyer left out an important element of his defense.  Then he turned towards the gallery, seemingly to address Lt. Clayton’s husband.

"These people know that I believed the police were trying to kill me, and they told no one. They endangered Debra, me, and everyone else. And they told no one. And they're trying to keep the jury from knowing that. And the judge is working with them. Walmart never had to happen, I tried to turn myself in two times before Walmart.  I would never kill your queen like that, never," Loyd said on the record in court.

The trial resumes at 9:30 a.m. on Tuesday when the state will start presenting its witnesses and evidence.  The judge expects the trial to last two to three weeks and the jury will be sequestered during that time.

Prosecutors are seeking the death penalty in this case.