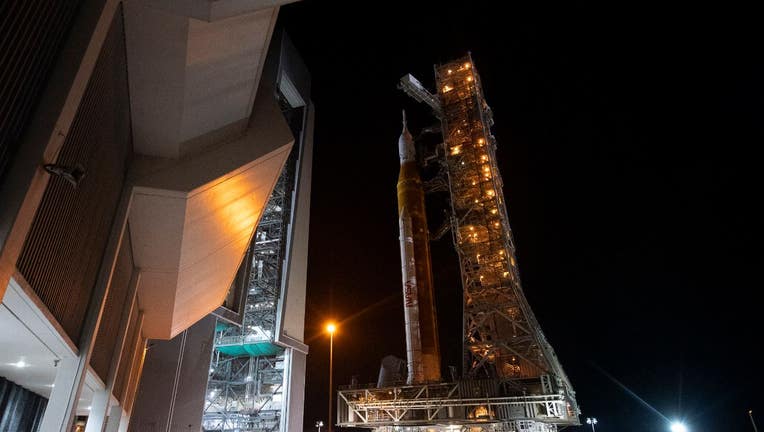 KENNEDY SPACE CENTER, Fla. - It's on the move! NASA's Artemis l mega moon rocket is headed back to the launchpad at Kennedy Space Center in Florida where it will sit until its next launch attempt.

NASA management is hopeful this is the final outing to the launchpad for the agency's mega moon rocket, which has made the 4-mile journey to the pad for two other launch attempts this year. Using the crawler transporter, the rocket will move at a speed of 2 mph and take about 10 hours to reach the launchpad.

The space agency is targeting Nov. 14 at 12:07 a.m. EST to launch the Artemis 1 test flight from Kennedy Space Center launchpad 39B, sending the Orion spacecraft on a monthlong orbit around the moon and back. This uncrewed test flight is a critical precursor to SLS launching astronauts on the Artemis 2 mission and then the first human moon landing for the program by 2025.

On Thursday, NASA managers told reporters they are confident about this latest launch decision.

While inside the Vehicle Assembly Building, teams worked over the past month to swap out Flight Termination System batteries, recharge some science payload batteries and perform other maintenance on the SLS and Orion.

"Right now, we are very confident in our team and our systems, and we're looking forward to getting back out to the pad and getting launched on the 14th," said Jim Free, associate administrator for NASA Exploration Systems Development Mission Directorate.

The crawler began to move the SLS to the pad at 12:01 a.m. Friday. It's expected to take several hours for it to arrive.

Two previous attempts – one in late August and the other in September – ended in launch scrubs due to technical issues with fueling the rocket with super-cold liquid hydrogen, which commonly leaks.

After the most recent launch attempt in September and a fueling test to work on a hydrogen leak, NASA decided to roll back the 322-foot-tall rocket to the VAB as Hurricane Ian was barreling toward Florida's west coast.

"When we had to roll back from the hurricane, I will tell you, it was disappointing," said Cliff Lanham, KSC Ground System senior vehicle operations manager. "But what I will say is the team immediately got to work, literally, when we were allowed on center after the hurricane. The enthusiasm and the efficiency of the team has been tremendous, outstanding."

Lanham confirmed there was no damage from Hurricane Ian to any of the facilities used by the Artemis vehicle. The Category 4 hurricane made landfall on Sept. 28 near Fort Myers with 150-mph winds and a deadly storm surge.

With the latest launch window in darkness, the views will be less than ideal than the previous daytime launch attempts, but Free said the launch team is confident in the overnight launch plan.

Launch Weather Officer Mark Berger said, "things look almost ideal," and the 45th is not tracking any concerns that might delay the roll.

Looking ahead to next week when launch preparations get underway, Berger said the 45th would be watching the tropics closely as the Atlantic hurricane season nears its end.

One area of potential development south of Puerto Rico is forecast to move northwest over the next week. The National Hurricane Center is giving the system a low chance of development as of Thursday. Even if the system does not become a tropical storm or hurricane, it's forecast to send a low-pressure system toward Florida with wind and rain.

"Regardless of whether or not it's named, pretty much what we're targeting is that through the middle part of next week, especially as we go Monday night into potentially Tuesday night or early Wednesday, us having the highest impact from that particular system as it approaches the Florida peninsula," Berger said.

More than a week away, Berger said those impacts could be sustained winds of nearly 30 mph with some rain squalls, but still within the SLS launch weather constraints.

The FOX Forecast Center continues to track several systems currently in the tropics. The official end of the Atlantic hurricane season is Nov. 30.