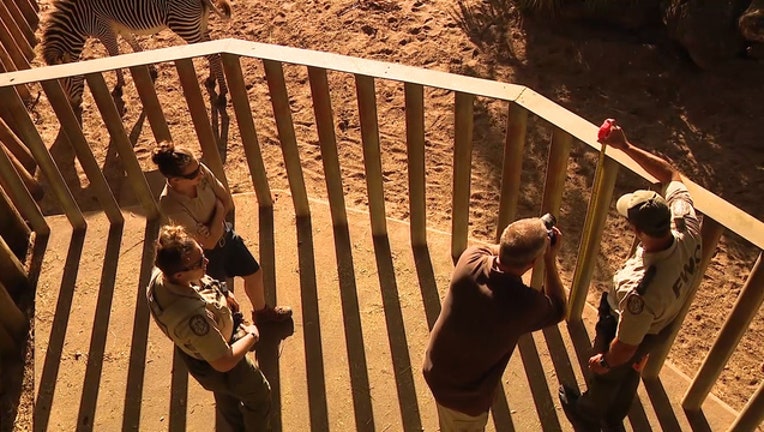 VIERA, Fla. (WOFL FOX 35) - The Brevard Zoo is facing tough questions about policy, safety, and what will happen next after a child and rhinoceros came head to head.

The child's family is asking for privacy as they recoup from Tuesday’s traumatic episode. A 2-year-old girl wound up the other side of a fence, in a rhino yard.  A newly released 911 call offers insight into how the zoo handled the incident.

"We had a child who fell off the African platform into the rhino exhibit," a caller told the dispatcher.

During the call, the dispatcher asked the caller how far the child fell, and the caller explained that the drop was more than 10 feet.  That information from the 911 caller, a zoo staffer, ended up being incorrect. The deck is ground level.

Zoo officials initially said the tot fell in just past the posts, but a new picture from another zoo guest, shows a kid’s shoe further away than that.

A rhino grazed the little girl with its snout.  A zoo spokeswoman tells FOX 35 the little girl's father was holding her the whole time, and that is why she was allowed to participate in the Rhino Encounter.

That’s a deviation from the zoo’s own website, which states that children must be age 3 and up to be in the Rhino Encounter.

Florida Fish and Wildlife officers are investigating, as the zoo has suspended all hands-on or up-close activities while a review is underway.

Dawn Dover and her sister are regular guests at the zoo. They love the Rhino Encounter, because you can touch and brush the rhinos.

“I never even thought when I was in there how a little kid could slip through there, you know?  It just never occurred to me.  But yes, I guess it happened, and I would say age restrictions or just put more for fencing in there,” Dover said.

Zoo officials say the rhinos didn’t do anything wrong in this situation, so nothing is going to happen to them. The girl’s family says she is doing well, but they are asking for privacy as they continue to recoup.