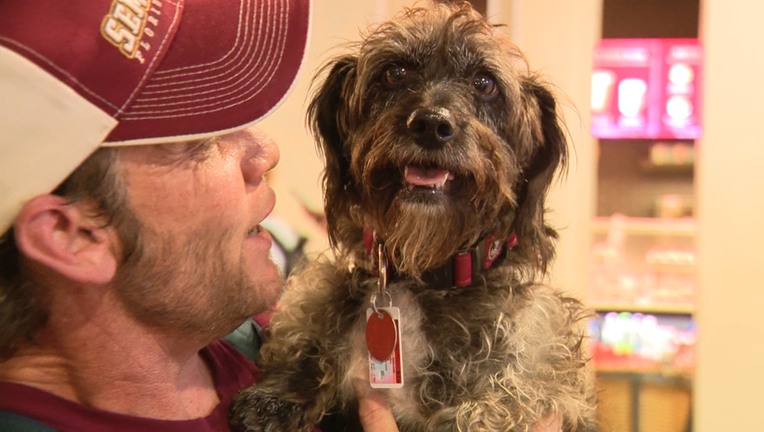 ORLANDO, Fla. - It may be a little early for Christmas miracles, but a man and his best friend seem to be living one.

On May 22, a man named Dean Hamilton was driving through Tulare County, California, traveling for special treatment at hospitals in the state. While traveling, he was separated from his dog, Angus, also known as Goosie.

"I went from a moment of despair," said Hamilton.

Hamilton says he spent every last dime he had to stay in the area and search for Angus. He wound up having to sleep out of his car and at one point was jumped. Finally, he sold the car to make enough money for a plane ticket back to Orlando, Florida, where he needed to care for his mom.

But Hamilton never gave up. He got in contact with nonprofits that search for lost pets. He called his microchip company to make sure his address was updated and that the chip was flagged for a missing dog.

Seven months later, he got the call: Angus is alive, and he’s coming home.

Angus had somehow made his way to Clovis, California – over an hour away from where he was first lost in Earlimart.

Officer Cristopher Hernandez ran his microchip, and found out where Angus really belonged.

"When we collect dogs from in field, we try to return them right away, and the chip is a really helpful thing that we use," explained Officer Hernandez.

But there was a problem: Clovis Animal Services didn’t have a way to get Angus all the way from California to Florida.

"The distance from Florida to here, I’ve never seen a case from our division have one of those," said Officer Hernandez.

That’s where the organization You Will Be Found Dogs came in.

They organized a flight for Dean to go pick Angus up in California, completely free of charge.

Shari Balfore with You Will Be Found Lost Dogs was there for the first time Hamilton and Angus saw each other again.

Another organization, Wild Angels Canine, organized for the two best friends to get a ride home from the airport.

A mother and daughter volunteered to drive from Zephyrhills to Orlando, a 90-minute trek, just to pick Hamilton and Angus up from the airport.

They waited with a bright pink handmade sign so Hamilton would know who to look out for.

And now, finally, Goosie and Hamilton are headed home.

Hamilton wanted to emphasize how important it is to microchip your pets, and make sure those records are kept up-to-date with any address or phone number changes.

He also gave special thanks to Clovis Animal Services, You Will Be Found Dogs, and Wild Angels Canine.