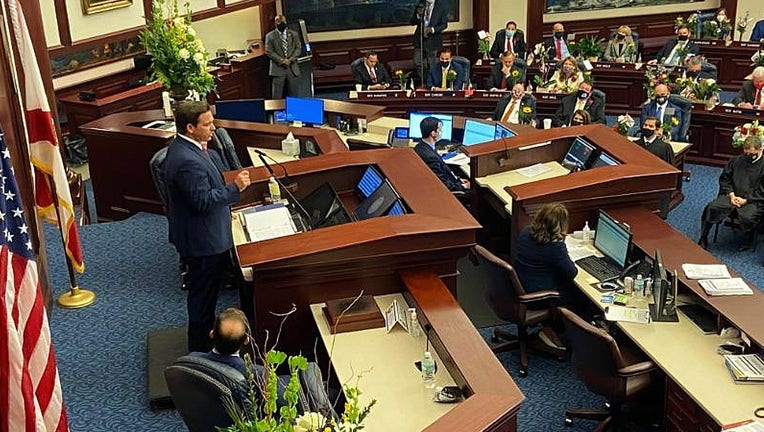 TALLAHASSEE, Fla. - Proposals to codify in state law a "Parent’s Bill of Rights" related to what families are entitled to know about their children's education and health care are advancing in the House and Senate, as the 2021 legislative session gets underway.

Sen. Ray Rodrigues, R-Estero, and Rep. Erin Grall, R-Vero Beach, are carrying the measures, which were approved by the Senate Judiciary Committee and House Health & Human Services Committee on Tuesday.

The plan has sparked controversy over students' privacy rights, but Rodrigues told the Senate panel Tuesday that his proposal (SB 582) doesn’t give parents any new rights that aren’t already in state law.

Instead, Rodrigues said, the bill would combine "for easy reference" provisions of existing Florida law that deal with parental consent. For example, the measure would give parents the right to inspect school instructional materials and opt out of sex education and vaccinations, which Rodrigues said parents are already able to do under state law.

Among other things, the Senate proposal would prevent health care practitioners and their employees from providing health care services or prescribing medicinal drugs to a minor child without a parent’s written consent. Practitioners who do so without parental permission would face a first-degree misdemeanor.

"It is currently implied that parental consent is necessary for a health care practitioner to provide health care services or prescribe drugs for a minor child. This takes that implication out, and specifically notes that parents have to sanction that before it can occur," Rodrigues said.

The House and Senate proposals also require school districts to "adopt a policy to promote parental involvement in the public school system."

But Democrats on the Senate committee asked Rodrigues why the bill is needed, if it mirrors what is already enshrined in state law.

"I understand the thought process is that these rights already exist in statute, just scattered. But when you put it together like this, there’s certainly the possibility of greater interpretation or broadening of these so-called rights," said Sen. Tina Polsky, D-Boca Raton. "I’m a parent of two children who went to public school, never once felt that my rights were infringed. I don’t understand where this is coming from."

Under an amendment added to the Senate bill on Tuesday, parents would have the right to consent before their "minor child’s grades are released to a law enforcement officer or law enforcement agency."

Sen. Jeff Brandes, a St. Petersburg Republican who sponsored the amendment, said the provision was spurred by events in his Tampa Bay-area district.

"We have an issue where law enforcement is accessing school grades and then doing visits to individuals’ homes based on those grades. I want to make sure that parents consent to those grades being released," he said.

Critics who spoke against the measures on Tuesday raised concerns about parts of the bill they say would put vulnerable children in danger.

"We wish that all youth, including LGBTQ youth, had supportive and affirming families, but we know that that is not always the case. Schools are sometimes the only place of safety for our LGBTQ youth. Many of them come out to teachers or guidance counselors before they come out at home," Mower told the Senate Judiciary Committee.

The League of Women Voters of Florida also opposes the Senate measure.

"Developing responsibility for health care is part of building a healthy adulthood. The vast majority of young people exercise this responsibility in consultation with their parents. The ones that don’t probably have good reason. Not all parents deserve parenthood, nor can you legislate that," Trish Neely, who spoke on behalf of the organization, said Tuesday.

The Senate Judiciary Committee advanced the proposal in a 7-4 vote along party lines, with Democrats opposed to the bill.

The House bill (HB 241) is unchanged from a version that was considered during last year's legislative session, Grall told the House Health & Human Services Committee on Tuesday.

Democrats on the panel asked Grall whether the bill would require school guidance counselors or other public school employees to tell parents about information students share in confidence, such as details about their sexuality.

"This bill does not mandate (employees) to tell the parent. It does, however, not allow them to coerce or intimidate a child to keep something from their parent. That’s the language that’s in here so that there isn’t the use or abuse of authority to say, you shouldn’t engage with your family on this," Grall said.

Democrats also pushed Grall to explain whether the bill gives parents any rights that aren’t currently in Florida law.

"It seems like a lot of these rights are already inherent or stated someplace. What is new, in your bill, that parents don’t already have the right to do?" Rep. Kelly Skidmore, D-Boca Raton, asked.

"What is actually new, would be that obligation to report if there is in fact a criminal act that takes place if you have not contacted DCF (Department of Children and Families) or law enforcement, and with the consequences of disciplinary action if you fail to do that," Grall responded.

Grall added that her proposal also includes new provisions that would give parents the right to consent before a state agency or other entity takes and stores records of a child’s blood, DNA, or a biometric scan.

"That is not specified elsewhere in general terms to all agencies and institutions," Grall said during Tuesday’s meeting.

The House committee also approved the measure in a partisan vote.