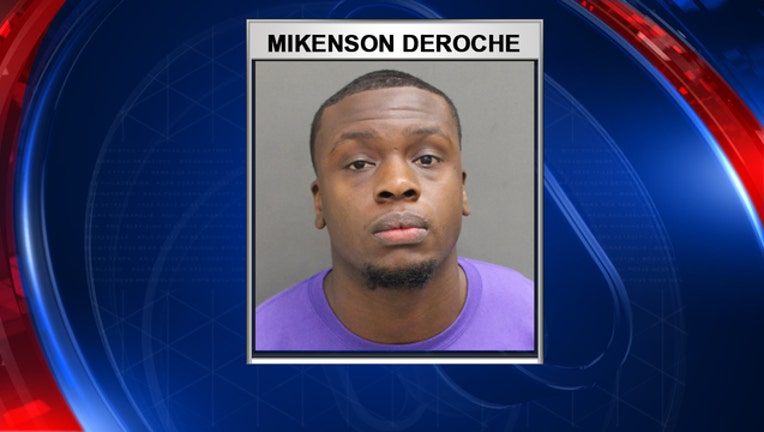 ORANGE COUNTY, Fla. (WOFL FOX 35) - Police at the University of Central Florida say a woman saving a parking spot for her fiancée ended up making another driver mad, causing him to get violent.

It all went down at the Knights Circle Apartment complex parking lot, according to authorities, where a man and his fiancée were visiting a friend.

"As I'm pulling up, I see the gentleman parked catty corner, like he was going to pull in, but he didn't, because he saw that she was standing in the space," the man explained.

He said he told the driver that his fiancée was saving this spot for him.

Police officers said those markings were of a fraternity tattoo. That's when investigators said 23-year-old Mikenson Deroche slugged the man from behind.

"I fell to the ground instantly, and all I remember was just getting pummeled and waking up.  I blacked out maybe for a few seconds, and I'm bleeding profusely. "

Police said Deroche shoved the man's fiancée, scraping her knees as she tried stopping the attack.

"I'm like 'How? Why? Why is this happening?' Because to me, something as simple as a parking spot can be solved with a simple conversation."

Instead, he suffered terrible pain.

"I have a broken jaw, broken in two different spots -- one in the front, closer to my chin, and one on the side, closer to where my jaw connects. They had to put two metal plates there."

Police caught Deroche after reviewing surveillance video.  They said they were able to identify him, because his victims remembered he had a fraternity tattoo on chest.

"If you understand that you're joining something that's big on community service, you should understand how to treat your fellow man in a normal, everyday atmosphere. It's heartbreaking, because I'm a very positive person, and people that know me, know that I'd give the shirt off my back for anyone.  So something like that hurts more of my feelings than hurts my face."

He said he can't eat, because of his jaw injuries.  He has hired an attorney, so he can get his medical expenses covered.