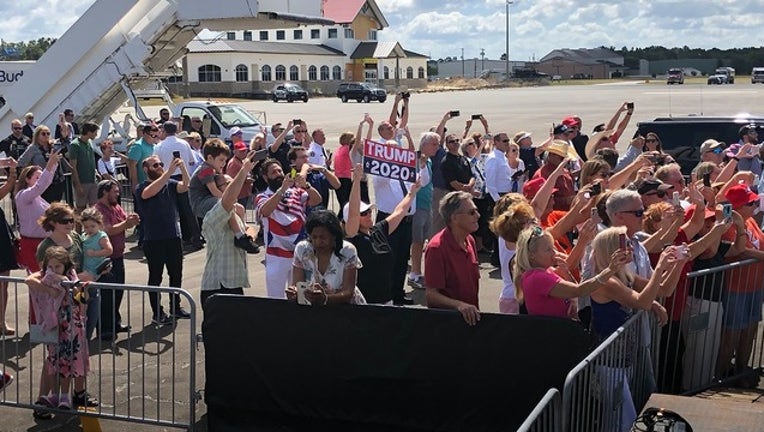 THE VILLAGES, Fla. (FOX 35 ORLANDO) - President Donald Trump laying out his plan for healthcare and Medicare but only briefly mentioning the impeachment inquiry. The President addressing an intimate crowd at Florida’s largest 55+ community, The Villages.

“My administration is standing up for American seniors,” said President Donald Trump.

“This is like the best day of my life,” said Donna Rupp, Trump supporter.

The President’s focus, the future of Medicare.

“As long as I’m President, no one will lay a hand on your medical benefits, that’s what we’re here to do today,” said Trump.

Mr. Trump warning the crowd of the his opponents.

“Medicare is under threat like never before, you have people that are running for office, if that happened, you will not be very happy here, almost every major Democrat in Washington has backed a massive government healthcare takeover, that would totally obliterate Medicare,” said Trump.

The President going as far as to signing an executive order on Medicare with the audience as his witness.

“That was awesome and we’re so happy to be here, witness it in person,” said Rebecca Smith, Trump supporter.

But Mr. Trump, surprisingly, only making one mention of the impeachment inquiry.

His supporters tell me, they don’t care to hear any more about it.

“I don’t think we need to talk about the impeachment because it shouldn’t exist,” said Rupp.

“I think he knows that it’s just a bunch of bull,” said Steve Rance, Trump supporter.

Part of the President’s healthcare plan is protecting vulnerable patients like those with preexisting conditions, seniors and veterans, goal that resonated with the audience of senior citizens and veterans.