Supporters of President Donald Trump rallied behind their candidate in The Villages on Friday. It was the president's third stop in Florida since he contracted the coronavirus.

THE VILLAGES, Fla. - One day after taking the debate stage against Democratic challenger Joe Biden for the last time before Election Day, President Donald Trump returned to Florida for a "Make America Great Again" rally in The Villages.

The President tailoring his message to the 65 and up voter.

“I believe that American seniors must come first,” said Trump.

The President taking aim at Biden’s energy policy that was plunged into the spotlight during last night’s debate, when Biden said he would transition from the oil industry to cleaner energy.

“Biden’s plan would mean America’s seniors would have no air conditioning during the summer, no heat during the winter and no electricity during peak hours, it’s true you know, he wants wind, you know when the wind doesn’t blow ‘let’s watch the president tonight on television, I’m sorry, we can’t, the wind’s not blowing tonight’,” said Trump.

President Trump also promising the primarily senior crowd, that seniors would be first to be injected with the COVID-19 vaccine.

“We’ll have 100 million vaccine doses before the end of this year and seniors will be the first in line, we’re taking care of our seniors,” said Trump.

The president spoke for about an hour-and-a-half before departing for an evening rally in Pensacola. 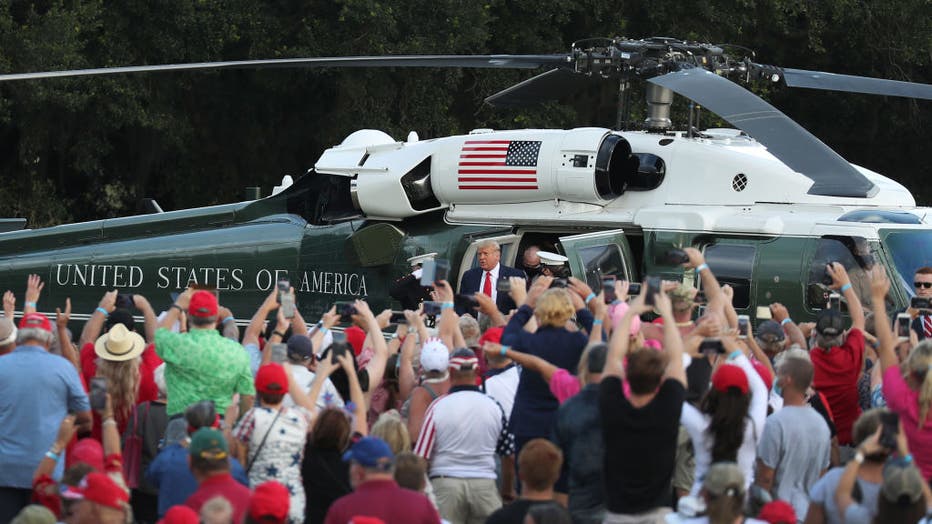 People cheer as U.S. President Donald Trump arrives on Marine One to speak during his campaign event at The Villages Polo Club on October 23, 2020 in The Villages, Florida. (Photo by Joe Raedle/Getty Images) 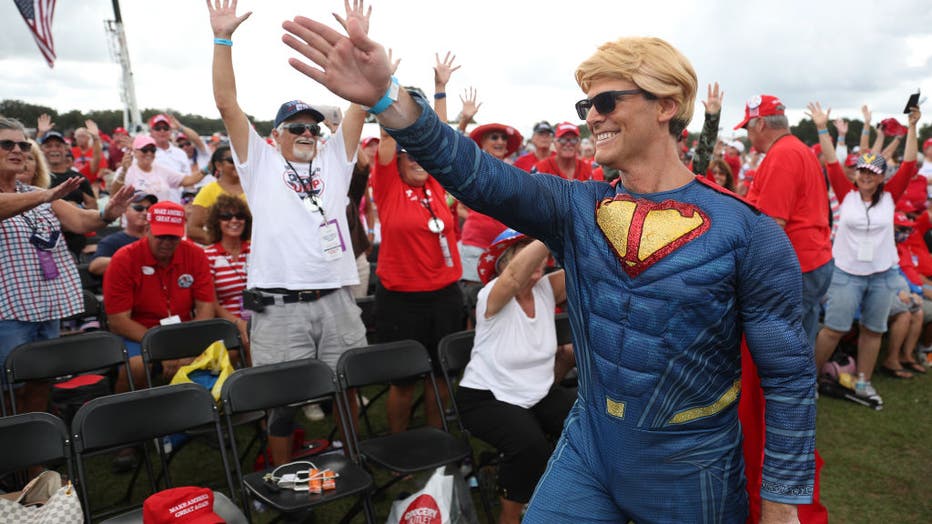 Stuart Sawyer dressed as a Super Trump waits for the arrival of U.S. President Donald Trump for his campaign event at The Villages Polo Club on October 23, 2020 in The Villages, Florida. (Photo by Joe Raedle/Getty Images) 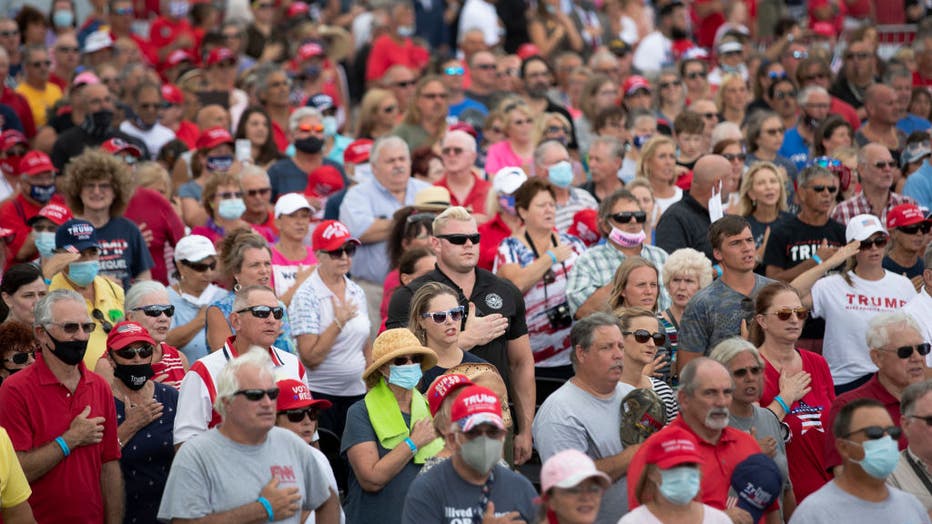 Supporters began lining up at The Villages Polo Club in the early morning hours to be among the first to see the president.

"We've been here since about 3 a.m.," one supporter said. "We were so excited by the debate last night. He totally smoked Joe Biden so bad. It was awesome."

One day after taking the debate stage for the last time before Election Day, President Donald Trump will return to Florida on Friday, October 23, for a Make America Great Again rally in The Villages.

With less than two weeks to go until Election Day, this is the third time the president will have visited the Sunshine State since contracting COVID-19. 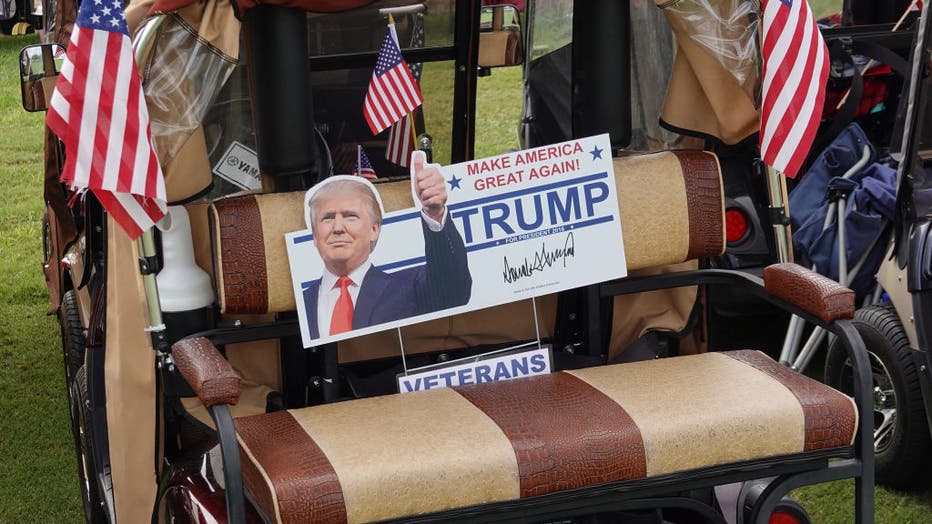 Campaign items for U.S. President Donald Trump are seen on a golf cart as people arrive for his campaign event at The Villages Polo Club on October 23, 2020 in The Villages, Florida. (Photo by Joe Raedle/Getty Images) 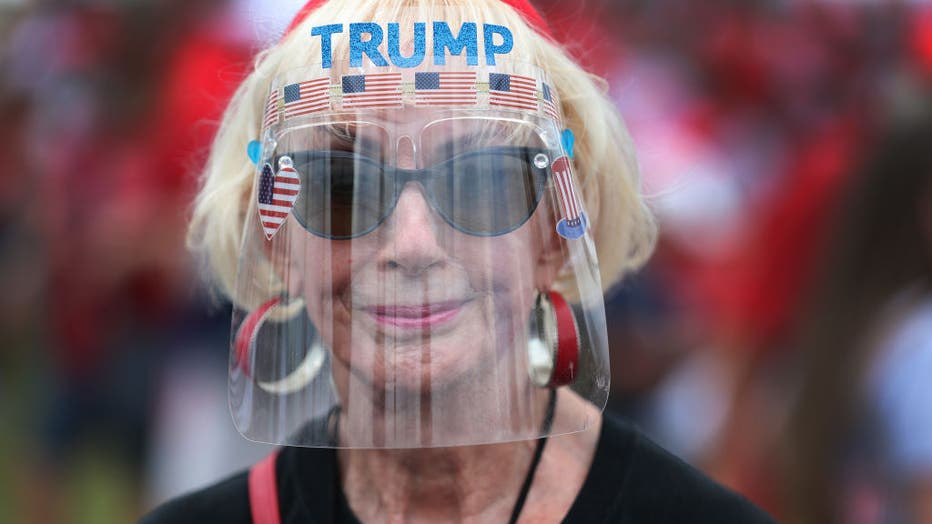 Patty Lake waits for the arrival of U.S. President Donald Trump for his campaign event at The Villages Polo Club on October 23, 2020 in The Villages, Florida. (Photo by Joe Raedle/Getty Images) 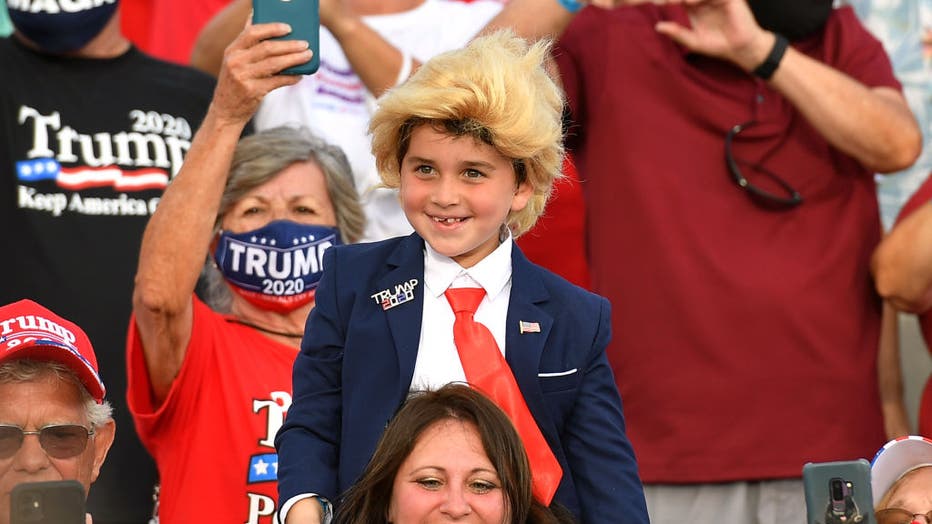 Pres. Trump chose Sanford as the location for his first road rally after being released from Walter Reed National Military Medical Center after receiving treatment for the coronavirus. He returned last Friday for a rally in Ocala.

President Trump's visit will be followed less than 24 hours later by former President Barack Obama, who will make a stop to campaign for Joe Biden in Miami on Saturday.

Voters are lining up hours ahead of President Trump's campaign rally in The Villages.

The president also plans to cast his ballot in person on Saturday, taking advantage of Florida’s early voting period.

The White House says Pres. Trump will vote in West Palm Beach, a short drive from his Mar-a-Lago private club, and, as of 2019, his official residence. The club is located in the town of Palm Beach, which doesn’t have any early voting locations.