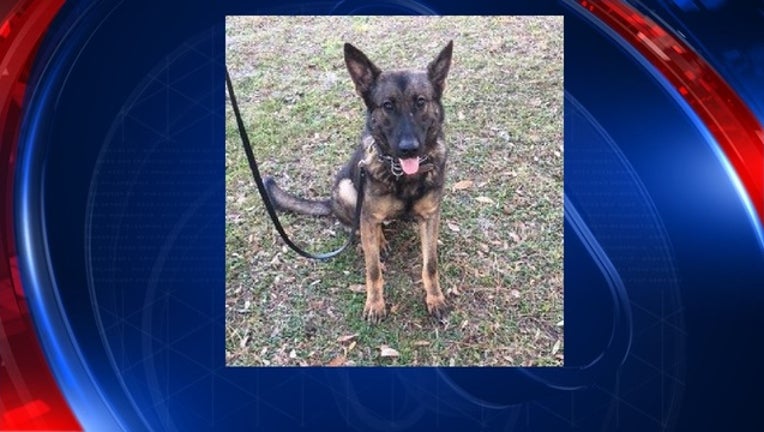 VOLUSIA COUNTY, Fla. (WOFL FOX 35) - A K-9 officer with the Volusia County Sheriff's Office was killed as a result of friendly fire, the agency announced on Thursday.  K-9 Forest was shot on Nov. 22 as deputies were pursuing a convicted felon on foot.

According to an investigation by the Florida Department of Law Enforcement, deputies were following Eddie Powell, who they say was armed with a gun; however, there is no evidence that Powell fired his weapon.

The FDLE report states that two deputies fired their weapons as Powell punched and fought with K-9 Forest while pointing a gun at one of the deputies.  It was determined that Forest sustained two gunshot wounds during the incident, but it is unknown which deputy fired the rounds that struck the K-9.

"Sadly, unintended consequences sometimes occur in shooting situations," said Volusia County Sheriff Ben Johnson. "This doesn't change the fact that Forest died a hero while trying to subdue a dangerous gunman. Our deputies were put into a deadly threat situation and were forced to defend themselves. As far as I'm concerned, Eddie Powell is responsible for the death of Forest just as surely as if he had pulled the trigger."

Powell has been booked into the Volusia County Branch Jail in Daytona Beach on charges of possession of a firearm by a convicted felon, fleeing or attempting to elude a law enforcement officer and operating an unregistered motor vehicle. He's also being held on a probation violation out of Georgia.

The Sheriff's Office will be filing additional charges of aggravated assault on a law enforcement officer and battery on a police dog.

On Wednesday the Volusia County Sheriff's Office released information in regards to the memorial that will be held Friday, December 9 for K-9 Forest.

The tribute will begin Friday morning with a processional starting in Deltona, where Forest served. His K-9 handler, Deputy Brandon Ellis, will lead the processional, consisting of K-9 units from the Sheriff's Office and local police departments.

The processional will depart from Deltona at noon (see processional route below) for a 13.4-mile journey to the memorial site, the Tommy Lawrence Arena at the Volusia County Fairgrounds on East New York Avenue in DeLand.

The memorial service will begin at 1 p.m. Speakers will include Sheriff Johnson, Deputy Ellis, Deltona K-9 Unit Supervisor Sergeant Brodie Hughes and Senior Deputy Michael Webb, who's the lead instructor for the Sheriff's Office's K-9 Unit. The service will include a helicopter flyover and 21-gun salute honoring K-9 Forest as he reports to his final watch.

Friday's memorial service is open to the public. Residents are also encouraged to render honors to K-9 Forest by lining up along the processional route as it passes through Deltona.

Donations
A K-9 Forest Memorial Fund has been established. Donations can be made at any TD Bank in Volusia County, or by mailing a check payable to the VCSO Charity Committee, Inc.

Donations also can be made on-line at the official YouCaring fundraising page: https://www.youcaring.com/vcsok9forest-709423