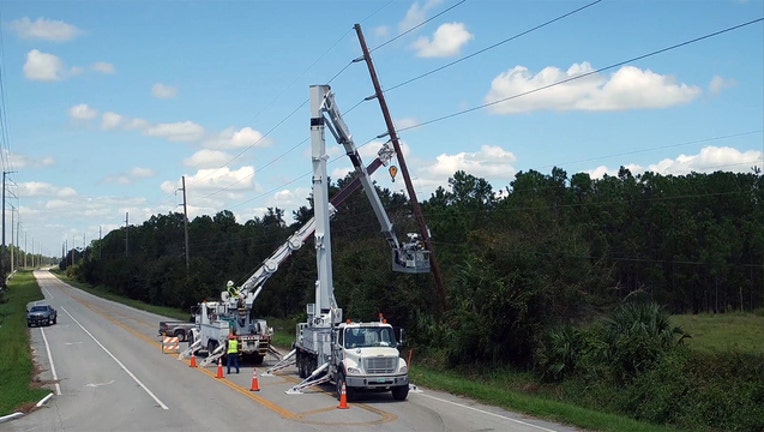 TALLAHASSEE, Fla. (NSF) - Florida utility regulators say changes are needed to ensure disaster-response crews can get through traffic created by motorists fleeing hurricanes, with a priority placed on availability of fuel and lodging for restoration workers.

Also, as part of a report released Tuesday, the Florida Public Service Commission called on lawmakers to consider requiring the hardening of non-electric utility poles; allowing electric utilities to manage trees and vegetation beyond public rights of way; and expanding statewide public-education efforts about the need to trim and replace problem trees on private property.

Each of the areas targeted for legislative action, considered steps to reduce electric outages and restoration costs, is outside the jurisdiction of the Public Service Commission.

Commission Chairman Art Graham said in a prepared statement that the report confirms that existing storm-hardening rules work. Also, he said other areas can be improved, “such as utilities’ undergrounding programs, customer communications, and tree-trimming coordination with local governments.”

The report came after Hurricane Irma knocked out power to millions of Floridians last year. It was the most-damaging hurricane to hit Florida since the disastrous 2004 and 2005 hurricane seasons.

“It’s a real hardship to be without power, so it’s natural to be frustrated when it happens,” Graham said. “We shouldn’t let that keep us from seeing the progress that’s been made --- utilities achieved much shorter outage times than in the past, even though Irma was a huge storm.”

At meetings this year to discuss storm response and planning, utility regulators and officials from Florida Power & Light, Duke Energy Florida, Tampa Electric, Gulf Power and the Florida Municipal Electric Association put an emphasis on the need to revisit how tree trimming is regulated.

The report found that billions of dollars spent the past decade on efforts to harden the various power systems in the state are “working, which resulted in shorter outages than in the 2004-2005 storm seasons.”

The report also noted the primary cause of many power outages came from fallen trees and debris outside of the utilities” rights of way. It also found that underground utilities performed “much better” in comparison to overhead lines and that there remains a need to improve communications from utility companies, as “despite substantial, documented improvement, some customers were dissatisfied with the extent of Hurricane Irma outages and restoration times.”

The report directs staff to continue monitoring Duke and FPL programs that will place some utility lines underground.

“Both programs are scheduled to begin in 2018, focus on historically poor performing lateral circuits to replace several hundred miles of overhead lines, and are being funded through current base rates including any previously approved step increases,” the report said. “The goal for each program is to test different construction techniques and identify different impediments to converting these targeted overhead facilities to underground.”

As for utility crews responding to storms, key issues include traffic congestion, according to the report.

“This presented problems in allowing utility crews to reach areas where aid in power restoration was needed,” the report said. “Additionally, there was a shortage of fuel leading up to and following the storm which also presented an impediment to utilities’ restoration efforts.”

Besides the requests to state lawmakers, the commissioners also want staff members to collect information on how each utility prepares for and responds to roadway congestion, fuel availability and lodging accommodations.

Lawmakers this year looked at a number of hurricane-related issues, with the House setting up a special committee to come up with recommendations.

The House approved a proposal (HB 521) focused on clearing trees and brush in flood and drainage-control rights of way. But the effort died as a separate measure failed to advance in the Senate (SB 574).

Also, legislators did not advance proposals that would have included creating a strategic-fuel reserve task force and used rail-tank cars to bring fuel into evacuation areas to avoid runs on gas stations.