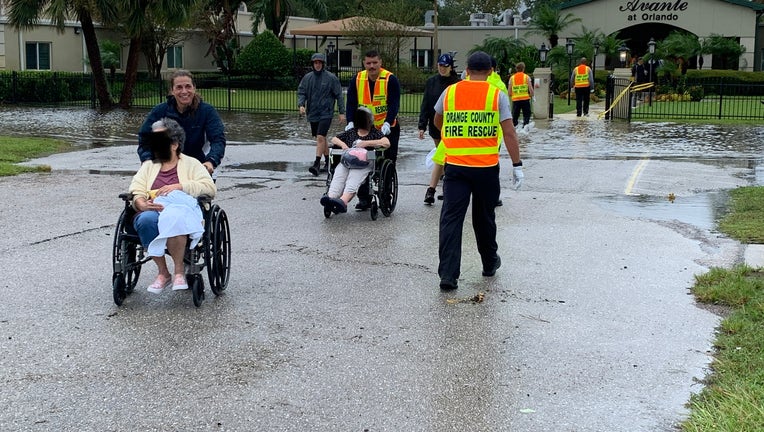 ORLANDO, Fla. - The Avante at Orlando nursing home was flooded after Hurricane Ian struck. The floodwaters have since receded, but it was a very different scene earlier.

First responders say the water was several feet deep when they started rescuing patients from the nursing home. First responders took Avante at Orlando patients out in wheelchairs, stretchers, and even boats.

"We would utilize the residents that could walk and move on their own. The water was high enough that we didn't want them going through the water, so we put them in the boat and brought them out to the roadway, so we could get them in the Lynx bus," said Orange County Fire Rescue Asst. Chief Renee Stone.

Buses, along with ambulances and even a city bus waited along Orlando’s Semoran Boulevard for more than a hundred nursing home residents, after Hurricane Ian flooded the facility. Leatendore Percentie came looking for his wife, who lives at Avante and is in a coma.

"So I tried to call the center here, but unfortunately the lines were down, and the photographs showed there was a tremendous amount of water on the grounds," he said.

Chief Stone said all residents were bused to either special needs shelters or hospitals, depending on the care they needed. "So there's high schools that they're, Freedom and University, for special needs. So the majority of them went between the two of those schools, and a handful went to the hospital."

"Because of her very high risk she had been transferred to AdventHealth on Lake Underwood," Percentie said of his wife, "I think it is. So that's where I'm not headed, hopefully, to find her there."

Fire crews cut power to the building, so there wouldn't be a risk of fire. There was no word when it might be safe to move the residents back. More than thirty rescuers helped get patients out of the nursing home. Chief Stone said the residents were mostly doing well.

"They all seem in good spirits, they were appreciative and thanking us for being out here and helping get them to a dry place and to the shelters."