A Seminole County mother was surprised to learn the Volusia County Sheriff boosted the reward in her son's cold case murder.

SANFORD, Fla. - A Seminole County mother was surprised to learn the Volusia County Sheriff boosted the reward in her son's cold case murder.

Even though a cold case happened in Volusia County, Alfreda Walker Tarver believes her son's killers are still walking free around Sanford, where the family lives.

She did not know a reward for tips in this 17-year-old investigation was increased by Volusia Sheriff Mike Chitwood from $10,000 to $25,000 until we told her.

"I am so very, very happy he’s interested in this case. I really appreciate it."

She said her son, Eric Walker, was murdered back in 2004, but authorities never made an arrest.

"He was driving on a secluded road in Osteen, Enterprise, Florida and his car crashed. And originally it was treated as the death from a car crash till the autopsy showed he had been shot," explained Sheriff Chitwood. "Somebody out there knows who did this and they need to come forward."

"I believe it’s someone walking around here every day that knows me and they know who killed my son," Tarver added.

For the first 14 years, she said received disturbing phone calls from a stranger. 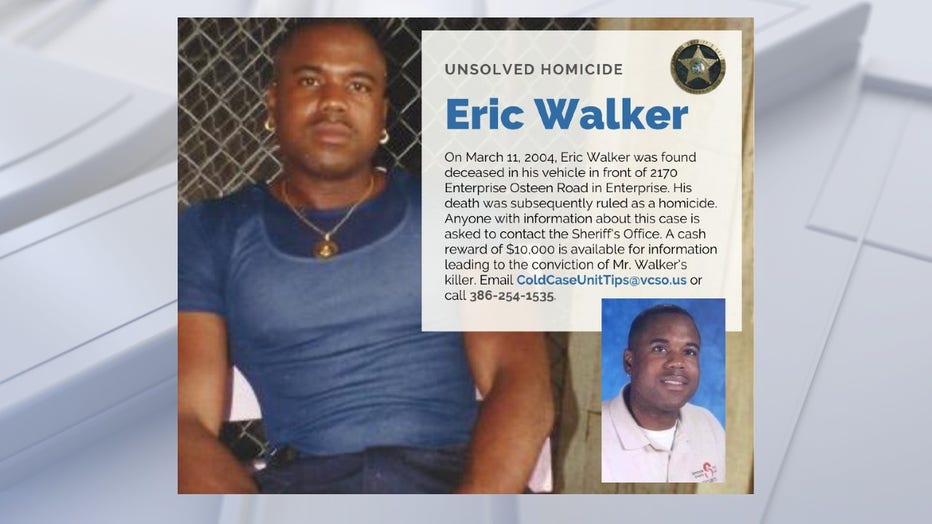 "Every anniversary, they would call me and tell me, 'Your son is dead! You need to be dead too!' I would get so disgusted."

She said authorities weren’t able to trace the calls. However, with an increase in the reward, she believes her prayers have been answered.

Anyone with information, in this case, is asked to call the Volusia County Sheriff’s Office at 386-254-1535 or email ColdCaseUnitTips@vcso.us.