The reward offered for information leading to the arrest of the man accused of shooting a Daytona Beach police officer has greatly increased.

LAKE MARY, Fla. - The reward offered for information leading to the arrest of the man accused of shooting a Daytona Beach police officer has doubled.

Volusia County Sheriff Mike Chitwood on Friday announced that an anonymous donor has contributed another $100,000 to the reward for information leading to the arrest of 29-year-old Othal Wallace in the shooting of 26-year-old Daytona Beach police officer Jason Raynor.

RELATED: Community rallies around Daytona Beach officer shot in the line of duty

Raynor remains in critical condition two days after being shot while responding to a suspicious incident at a location on Kingston Ave, the Daytona Beach Police Department said. 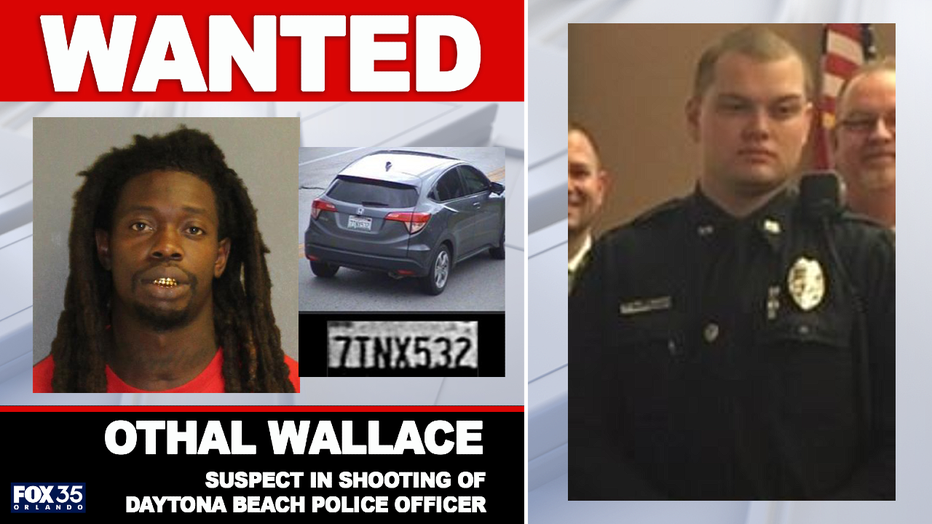 People packed into the lobby at Halifax Health for a prayer vigil for the young Daytona Beach police officer on Thursday.

Daytona Beach Chief Jakari Young said Raynor has been with his department since 2019.  The Port Orange Police Department said Officer Raynor was an officer there, from 2016-2019.

A Port Orange spokesperson tells FOX 35 News he won an award in 2018 for helping rescue a woman trying to jump off a bridge.  The agency described him as an exemplary officer with a "jovial spirit and genuine concern for his brothers and sisters and the communities he serves."

Wallace is still on the run and authorities believe he may have left the state.

"We’ve got a lot of resources working towards finding this guy, capturing him, and bringing him to justice," Bendayan said.

Investigators said they are also aware of Wallace posting about the NFAC Black Militia on his Facebook page, wearing military gear.  The organization is described as a Black nationalist paramilitary organization.

"We know about it. I promise you we’ve got a great team of cyber crimes people who are all about the social media life and know what to look for," Bendayan explained.

Shirley Pyle of The Pilot Club Halifax said she was dropping off a cartload of snacks and drinks for the police officers.

"Our prayers are with you. You have a village of people praying for you," she said of Officer Raynor.

Another resident, Sheena Bryan, brought flowers by the police station.

"I woke up this morning and just felt like I needed to do something," she explained.

"We made a banner for the officer, a ‘get well’ banner," said Caleb Proctor of Fast Signs Daytona Beach.

Bendayan added, "I think Officer Raynor’s family is grateful for it. It’s a tough time for them right now."