The Pasco County Sheriff’s Office is warning swimmers to be aware of sharks after its aviation unit captured video of the fish near Anclote Island on Thursday. (Credit: Pasco Co. Sheriff's Office via Storyful)

A 1,000-pound shark is swimming along the East Coast and making his way past the Jersey Shore and the Carolinas.

His name is Ironbound, after the West Ironbound Island near Lunenburg, Nova Scotia, where the shark was first tagged in 2019. According to OCEARCH, the shark is 12 feet and 4 inches long.

The non-profit marine research group provides data about shark migration and has tagged 84 of these large sharks, studying them from birth to old age. They also provide a free mobile app to track sharks in near real-time.

Ironbound has an electronic tracking device on him that pings whenever his fin breaks the surface. Researchers located the Canadian white shark off the coast of New Jersey about 10:30 p.m. on April 28. Now, it’s moving south and just tracked near the Outer Banks in North Carolina as of lunchtime Tuesday.

OCEARCH said the 20-year-old shark has traveled about 13,000 miles since first tagged. He has been going back and forth from the Florida Keys to Nova Scotia several times.

"He likes to go to Canada in the summertime. He probably will fly by Cape Cod, where a lot of other white sharks spend the summer and go to Canada and feed on the seal population that's up there in Nova Scotia," OCEARCH chief scientist Dr. Bob Hueter said.

Currently, he is following the migration path that great whites in the Atlantic Ocean make every year – spending summers in Canada and then swim south for the winter.

He pinged about 80 miles away from the Jersey Shore coast in late April and then made his way to the Outer Banks, pinging there Tuesday afternoon. You can track Ironbound's movements on the OCEARCH Global Shark Tracker.

"These are not air breathers. So they come at the surface only occasionally. But when they do come to the surface, they give us a ping via the satellite system that comes back to our labs and then out to the public," Hueter said.

OCEARCH believes in sharing this information in real-time with open access to the public so that everybody can learn, including scientists, as these sharks swim about the oceans. 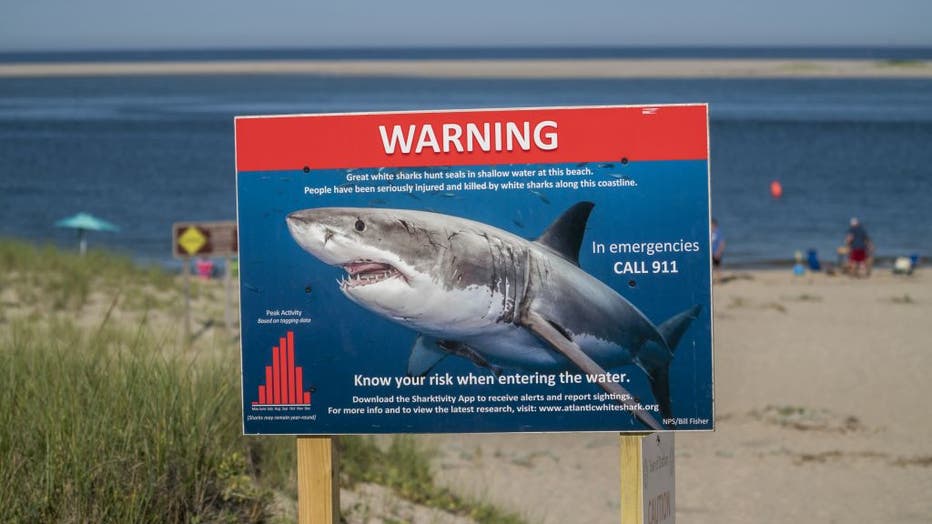 Beachgoers swim near a sign warning of risk in the waters where one of the world's highest concentrations of great white sharks is found. (Photo by: Tyson Paul/Loop Images/Universal Images Group via Getty Images)

Hueter said there is nothing to be afraid of with sharks, and they are much less interested in humans than you might think.

"Obviously, they’re not interested in us. If they were, they would bite a lot more of us every year. They have plenty of opportunities," he said. "These are animals that are feeding very high on the food web. They like things like seals, even whales, dead whales, and then lots of fish and sometimes other sharks, but not people."

Over the last 40 years, shark populations have dropped. The animals are marked as vulnerable and face population decline because of overfishing.

"Sharks have been decimated in waters around the world. But we have good news. Here in the United States and Canada, the white shark population is rebuilding. It's coming back, which is very important for restoring the ecological balance of the ocean," Hueter said. "White sharks, being apex predators, are at the top, and they help to control that balance."

OCEARCH said they study the sharks from all angles.

"Every single animal gets a full 15 to 20 minute examination. Everything from their DNA up to finally putting these tags on them so that we can track them for up to ten years after we've seen them and release them," Hueter said.

Part of the reason OCEARCH wants to know where they are is to make fishermen aware of their location.

GET UPDATES ON THIS STORY AT FOXWEATHER.COM