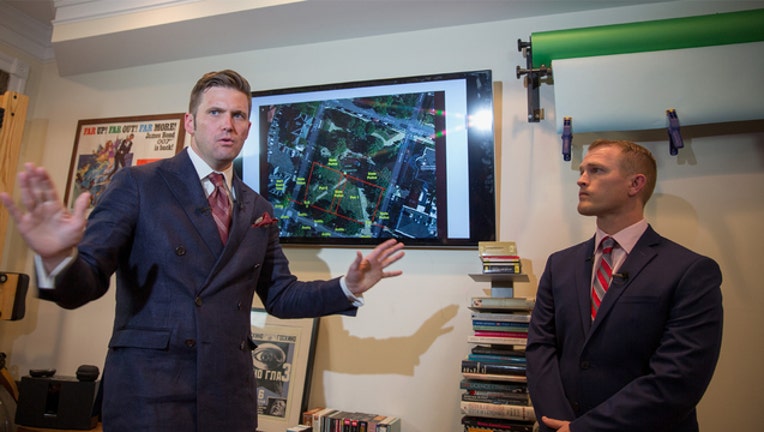 TALLAHASSEE, Fla. (NSF) - Supporters of Richard Spencer, the firebrand white nationalist whose upcoming appearance at the University of Florida sparked a state of emergency, say he's not a racist.

And, they insist, he's not to blame for violent clashes like the one at a “Unite the Right” rally in Charlottesville, Va., that left one woman dead and dozens more injured.

But the Anti-Defamation League brands Spencer as a white supremacist whose buttoned-down appearance and articulate speech belies a hateful, anti-Semitic ideology.

Attorney General Pam Bondi this week painted Spencer, the head of the National Policy Institute, as a dangerous provocateur who has incited violence across the nation.

“This guy is out there espousing violence and hatred and anger,” Bondi told reporters Tuesday.

Gov. Rick Scott, who declared a state of emergency in Alachua County this week, has also urged people to avoid the event Thursday.

Bondi's and Scott's take on Spencer and his followers is “complete nonsense,” Evan McLaren, executive director of the Washington, D.C.-based National Policy Institute, told The News Service of Florida in a telephone interview.

“And they know it's nonsense, because they have no substantial or serious response to our message and to our presence and so they're trying to deal with it by portraying us as violent and hateful,” McLaren said. “There's nothing hateful about what Richard or myself or National Policy Institute expresses.”

Spencer calls himself an “identitarian” who wants “to preserve the white majority” in the country.

U.S. Sen. Marco Rubio and University of Florida President Kent Fuchs also urged people to boycott Spencer's speech as Gainesville braces for the kinds of skirmishes between Spencer's supporters and opponents, including “Antifa,” or anti-fascists, that have erupted on campuses elsewhere.

The university initially balked at allowing Spencer to speak, but relented after his attorney threatened to sue.

“I think Gov. Scott and the attorney general would be well-advised to see that the First Amendment is protected and upheld instead of injecting themselves into a political dialogue that they are obviously not able to handle like responsible adults,” McLaren said.

McLaren blamed Antifa, many of whom wear black helmets and carry pepper spray, for the melees at Spencer's other appearances.

“When we hold events by ourselves that we control, there is no violence,” McLaren said. “The only time that there is violence is when the left shows up to counter-demonstrate and attack us, or even when elements of the left show up on their own.”

At the Charlottesville rally in August, Spencer supporters carried tiki torches and chanted “Jews will not replace us” before a car plowed into a group of counter-protesters, killing Heather Heyer and injuring dozens of others.

But counter-protesters and Spencer supporters may not be the only ones in danger.

McLaren went to work for Spencer shortly after passing the Bar exam in late July.

“My first business purchase was a ballistics vest. So we're definitely mindful of the threat that we face. But this is just how the game is played. If you want to say something serious and meaningful and change-oriented, then obviously it's going to upset a lot of people,” McLaren said.

Antifa members from Atlanta and Orlando are expected to flood into Gainesville, even though they may not have access to the Phillips Center for the Performing Arts, where Spencer will speak.

Organizers of the event decided to distribute tickets to the speech, instead of the typical process in which the center provides the tickets, after reports that ticket-holders could exchange the passes for free beer or even money.

McLaren said he will hand out tickets inside the venue to people who make it through a primary security check, and he won't give them to anybody who looks like they are there to create a disturbance.

The selective ticket situation could heighten tensions already ramping up at the university.

“It made us all upset because it's happening on our campus and we can't even attend the event,” said Christopher Wilde, a 21-year-old senior from Miramar who is a member of the “No Nazis at UF” group opposing Spencer's speech and the university administration's handling of it.

In Gainesville, barricades are already erected, streets will be shut down and Florida Highway Patrol officers are on the ground, creating a forbidding aura.

Many students are torn between boycotting the speech, as advised by Fuchs and others, protesting or attending. Despite the state of emergency issued by Scott, Fuchs has not canceled classes Thursday.

Dozens of members of the “No Nazis at UF” group marched to the school's administrative offices Monday to protest Spencer's appearance, pledging to show up en masse on Thursday. The group, which collected more than 3,500 online petitions urging the university to cancel the speech, participated in a sit-in on campus Tuesday evening to protest the university's refusal to cancel classes.

“They're pretending you can go to campus safely if you stay away from the Phillips Center, but they're shutting down buildings that are far away,” Wilde said in a telephone interview. “It's a mixed message. School isn't closed but we're going to have cops and National Guard all over campus and buildings are shut down. If it's safe out there, why is there such a heavy police presence and why are buildings being closed early?”

Wilde is ignoring advice from his parents, who told him to treat the rest of the week like a hurricane and stay shuttered in his apartment, even though he said he is afraid of what might happen Thursday.

“I'm worried for everyone's safety but I also know that we have to show our opposition to this kind of ideology because in history the only thing that has stopped it is opposition to Nazism or white supremacy,” he said. “It's scary but it's the only way.

Meanwhile, a group of students has organized an online event scheduled to take place at the same time as Spencer's 2:30 p.m. speech.

“If people want to protest, they're going to protest. But there's also people on campus who feel very unsafe and would rather stay inside so this gives them an outlet to engage with the university community and not be alone on that day,” said Cassie Bell, a 22-year-old senior from Margate who is one of the organizers of “TogetherUF.”

The Facebook event, which Bell called an “online assembly” and will be accompanied by live social media posts, gives students “an opportunity to stay safe and be inside if that's what they prefer to do.”

The speech coincides with exams for most students, adding to anxiety, said Bell, who hasn't decided what she will do on Thursday.

But participating in the TogetherUF group has given students like Bell an outlet to protest Spencer's platform, even if only from afar.

“I obviously don't agree (with him). I have yet to meet somebody that does. But I almost feel that they're so radical I'm not sure what I can do as an individual to combat their beliefs,” she said in a telephone interview. “It's given me a sense that I'm not just sitting on my hands, that we're actively making an effort.”