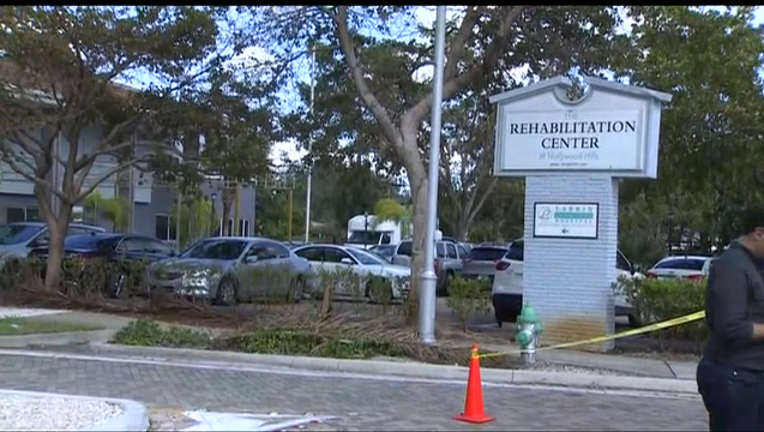 The moratorium on admissions, issued by the state Agency for Health Care Administration, came after The Rehabilitation Center at Hollywood Hills was evacuated earlier in the day. U.S. Sen. Bill Nelson, D-Fla., also called on the federal Department of Health and Human Services to get involved in investigating the deaths.

“The respondent's (the nursing home's) deficient conduct is widespread and places all future residents at immediate threat to their health, safety and welfare,” said the moratorium, signed by Justin Senior, secretary of the Agency for Health Care Administration. “The respondent has demonstrated that its physical plant cannot currently provide an environment where residents can be provided care and services in a safe and sanitary manner.”

Nursing-home administrator Jorge Carballo also issued a lengthy statement Wednesday night that expressed the facility's “deepest sympathy to the family members of the residents who passed away following a prolonged outage of our air conditioning system due to Hurricane Irma.” The statement said all other residents of the 152-bed facility had been moved to nearby Memorial Regional Hospital.

Carballo's statement and the moratorium provided more details about what happened at the Hollywood nursing home leading up to the deaths Wednesday.

The moratorium said the nursing home became aware Sunday that its “air conditioning equipment had ceased to operate effectively” and put eight portable air coolers throughout the facility and used fans in hallways. It said several residents suffered respiratory or cardiac distress between 1:30 a.m. and 5 a.m. Wednesday.

Carballo's statement provided similar details about the cooling problem. It said the facility did not lose power during Hurricane Irma, but it lost a transformer that powered the air-conditioning system. The statement said the nursing home contacted Florida Power & Light and followed up about when repairs would be made.

“In compliance with state regulations, the center did have a generator on standby in the event it would be needed to power life safety systems,” Carballo said in the statement. “The center also had seven days of food, water, ice and other supplies, including gas for the generator. Additionally, when the transformer powering the A/C went down, staff set up mobile cooling units and fans to cool the facility. Our staff continually checked on our residents' well-being --- our most important concern --- to ensure they were hydrated and as comfortable as possible.”

The Sun Sentinel newspaper reported that the residents who died ranged in age from 71 to 99. The newspaper quoted Hollywood Police Chief Tomas Sanchez as saying authorities were treating the deaths as a “criminal investigation.”

FPL and other utilities have grappled with millions of customers losing power as Irma pummeled the state in recent days. The Florida Health Care Association, a nursing-home industry group, said Wednesday morning that about 150 of nearly 700 nursing facilities in the state did not have electricity fully restored.

Information on the Agency for Health Care Administration's website said The Rehabilitation Center at Hollywood Hills' current license was effective July 17 and is scheduled to expire July 16, 2019. AHCA said the facility has an occupancy rate of 93 percent.

But the facility is rated “below average” on a federal scorecard that includes information about issues such as inspections, staffing and quality of care. The federal Medicare.gov website includes a Centers for Medicare & Medicaid Services report that said a health inspection was conducted by the state March 31 and found a series of deficiencies at the facility. While some of the deficiencies appeared likely to affect few residents, the report indicated other more-serious deficiencies were found in areas such as food safety, disposal of garbage and infection-control programs.

News of the residents' deaths Wednesday quickly drew national attention in a state already reeling from the devastating effects of Irma, which made landfall Sunday in the Keys and Southwest Florida.

Nelson described it as an “inexcusable tragedy that frail patients would die of heat exhaustion without it being recognized.”

Scott said he was “absolutely heartbroken” to learn of the deaths.

“Every facility that is charged with caring for patients must take every action and precaution to keep their patients safe --- especially patients that are in poor health,” Scott said in a prepared statement. “I have directed the Agency for Health Care Administration and the Department of Children and Families to immediately work with local law enforcement to conduct an investigation, and if they find that anyone wasn't acting in the best interests of their patients, we will hold them accountable to the fullest extent of the law.”