Dr. Charles Gerba warns that phones, which are essentially an extension of ourselves, are actually mobile germ devices.

SEOUL, South Korea - New research suggests that asymptomatic people who are infected with the novel coronavirus carry similar levels of the virus in their body as those with symptoms — and for almost as long.

A study in South Korea, published Aug. 6 in JAMA Internal Medicine, aimed to look at the viral load differences between symptomatic COVID-19 patients and asymptomatic patients — or those who do not develop symptoms. Viral load refers to the amount of virus in an infected person's body.

Many experts have pointed to the idea that individuals who feel generally healthy are still capable of spreading the virus, a point of contention in the debate on whether to fully reopen schools for in-person instruction.

But most of what’s known about asymptomatic spread is observational, and not based on scientific evidence. Asymptomatic transmission has been suspected by those studying the virus, and the paper offers further proof. 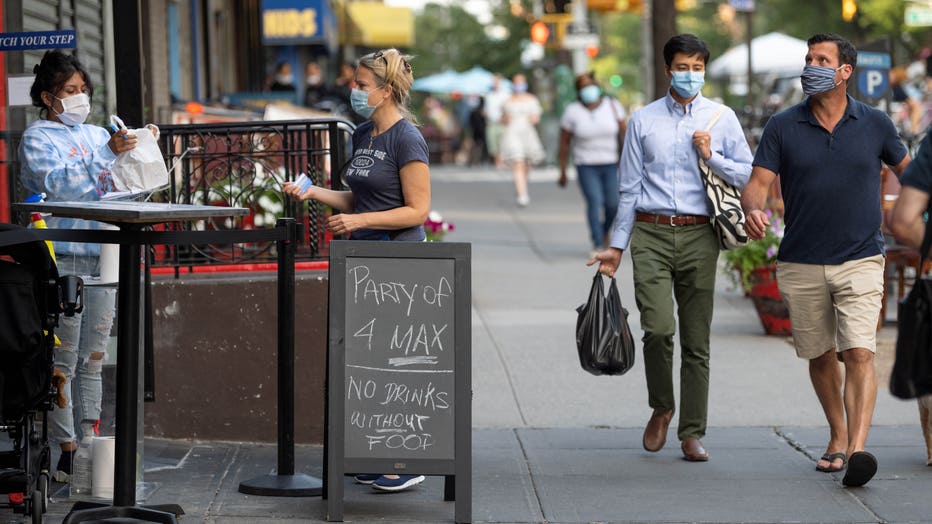 eople wearing masks are seen walking near a restaurant's 'party of 4 max, no drinks without food' sign as the city continues Phase 4 of re-opening following restrictions imposed to slow the spread of coronavirus on August 06, 2020 in New York City. T

The team of researchers led by Dr. Seungjae Lee at Soonchunhyang University College of Medicine analyzed swabs taken from 303 people between March 6 and March 26. The patients were isolated at a community treatment center in Cheonan, following an outbreak among a religious group that began in Daegu.

The patients ranged in age from 22 to 36, with two-thirds identified as women. Of the total, 193 people had symptoms and 110 were asymptomatic. Of those who were originally asymptomatic, 89 never developed symptoms at all throughout the course of their isolation.

The research also helps illustrate what portion of infected people are truly asymptomatic, compared to those who are just “presymptomatic,” which has been a source of confusion amid the pandemic. Presymptomatic is the phase when an individual is infected and may be shedding virus, but hasn’t yet developed symptoms.

All of the patients were sampled at regular intervals beginning on day eight of isolation, using nasal and throat swabs. The study found that samples taken from asymptomatic people showed a similar viral load as those with symptoms.

Additionally, researchers said the median time from diagnosis to the onset of symptoms in presymptomatic patients was 15 days, with a range from 13 to 20 days.

“Little is known about the infectiveness of asymptomatic patients,” the study authors wrote, but noted that the findings “offer biological plausibility” to reports of transmission by asymptomatic people.

"It's important data, that's for sure," Benjamin Cowling, an epidemiologist at the University of Hong Kong who was not involved in the work, told the New York Times. "And it does confirm what we've suspected for a long time — that asymptomatic cases can transmit infection."

But Cowling added that because asymptomatic people do not frequently cough or sneeze, they may be "less efficient at expelling the virus than those who are clearly unwell."

The study authors concluded that everyone infected with the virus should isolate, regardless of symptoms.

RELATED: CDC says most people with COVID-19 should isolate for 10 days, rather than 14