Troopers with the Florida Highway Patrol are searching for suspects in a fatal hit-and-run in East Orange County that happened on Tuesday.

ORANGE COUNTY, Fla. - Troopers with the Florida Highway Patrol are searching for suspects in a fatal hit-and-run in East Orange County that happened on Tuesday.

FOX 35 News got a closer look at the Chevy Cruze at the center of the hit-and-run investigation. The front of the car was mangled because troopers said it ran into a motorcycle that became lodged under the car.

The suspects left the scene on foot.

"Because of the chaotic scene, it was dark, all witnesses could tell us is that it was two people," Lt. Montes said. "We don’t know if they are male and female."

Investigators said witnesses saw the car speeding as it was exiting onto Chickasaw Trail from State Road 408. Witnesses said the car also ran a stoplight before hitting the motorcycle. 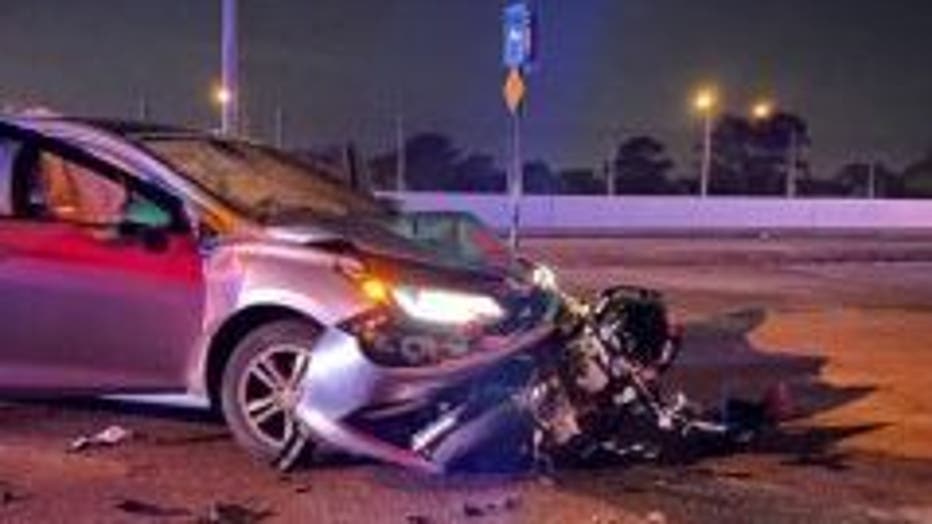 The 18-year-old boy and 16-year-old girl on the bike were ejected and neither of them was wearing helmets. The boy died while the girl remains in the hospital in critical, but stable condition.

Police K-9s tracked the suspects’ scent to a nearby apartment complex after the crash but later lost it.

Troopers are working to get in contact with the owner of the car.

A 19-year-old man whose mother says he went missing while traveling from Tallahassee to Ft. Lauderdale was fatally struck by a vehicle, Florida troopers said.

"We have two families dealing with the circumstances with this crash, not only somebody running a red light and hitting their motorcycle but then not even sticking around to call 911 or render aid as a human should do," Lt. Montes said. "Now these families are dealing with this situation."

Troopers said this is the ninth fatal hit-and-run orange county has had this year. This time last year there had only been one.