ALACHUA COUNTY, Fla. - Several counties in Central Florida are announcing that schools will be closed on Thursday, November 12th due to Tropical Storm Eta.

Alachua County Schools says that schools will be closed on Thursday due to the projected impact of Tropical Storm Eta.

They made the announcement on Twitter on Wednesday morning.

With Tropical Storm Eta on its current forecast to make landfall south of Dixie County, all Dixie District Schools will be closed on Thursday.

Due to the potential for tropical-storm-force winds and unsafe travel conditions, Gilchrist County has canceled school for Thursday, November 12. At this time, the district plans to reopen on Friday, November 13. 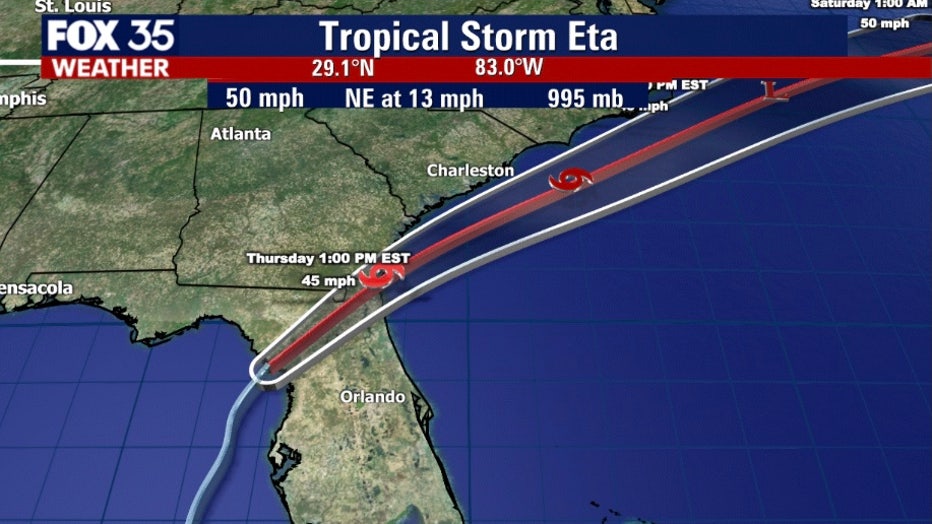 Lake County Public Schools has announced that schools and district offices will be closed on Thursday because of the threat of strong winds and uncertain timing associated with Tropical Storm Eta.  School activities are expected to resume on Friday.

Levy County Schools will be CLOSED on Thursday, November 12 due to Eta and plan to reopen on Friday.

Marion County Schools have also announced that they will close schools on Thursday.

"Based on Wx predictions & abundance of caution, school is canceled for MCPS tomorrow (Thursday). Schools should reopen Friday on normal schedules as of now."

Sumter County also announced that they close schools on Thursday due to Eta. Any updates will be posted on the district's website.

Polk County announced that they will also close schools on Thursday due to Eta. They said that "it will be unsafe to transport students to and from school. The decision to close schools and offices is being made out of an abundance of caution, to ensure the safety of our students, parents, and employees."

They expect schools to reopen and operate as normal on Friday, November 13th.

All other school districts in Central Florida are open and monitoring Eta.

Eta was downgraded on Wednesday afternoon back to a Tropical Storm after becoming a Category 1 hurricane early in the day. It is expected to cross over North Florida, impacting Alachua, Dixie, Gilchrist, Levy, Marion, Lake, and Sumter counties with tropical storm conditions.

FOX 35 meteorologist Jayme King says Eta should be a very strong tropical storm at landfall, which is anticipated to be around 7 a.m. Thursday morning.

"On the forecast track, the center of Eta will move closer to but just offshore of the west-central coast of Florida tonight, and move inland over the northern portion of the Florida peninsula on Thursday," the NHC said. "Eta is expected to move northeastward into the western Atlantic late  Thursday and early Friday."

FOX 35 Chief Meteorologist Glenn Richards says that tropical-storm-force wind gusts will be felt through most of Central Florida starting Wednesday evening. The strongest winds will be west and north of metro Orlando through 12 p.m. on Thursday.

FOX 35 meteorologist Jayme King says Eta should be a very strong tropical storm at landfall, which is anticipated to be around 7 a.m. on Thursday morning. While western counties in our viewing area will be hit the hardest, other parts of Central Florida should be mindful of rain, flooding, wind gusts, and the possibility of storm cells that could produce a tornado. 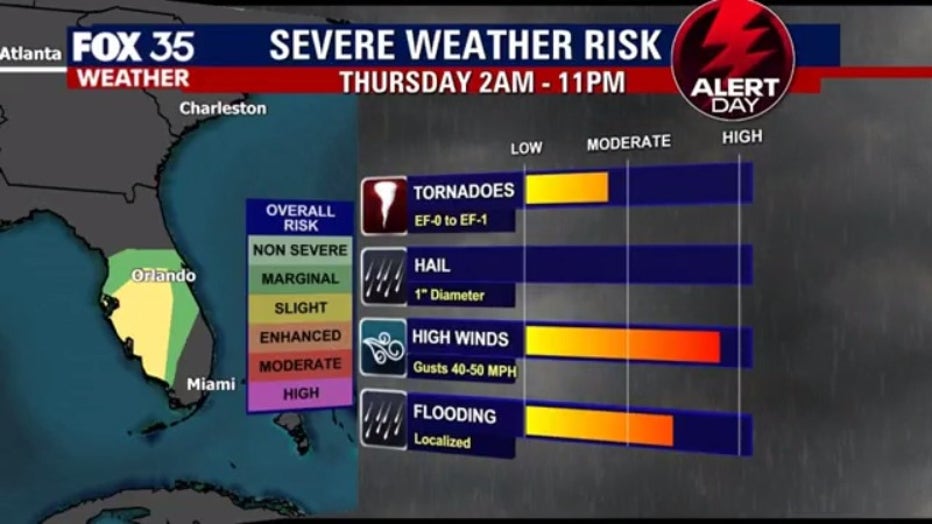 Watch FOX 35 News for the latest on hurricane season.