Polk County Sheriff Grady Judd said the shooting happened Wednesday in the area of Fern Road and Maggie Circle, and involved rival gangs from Winter Haven and Haines City with a long history of violent interactions.

Judd said back in March, the gang from Winter Haven recorded a social media video of themselves dancing on the grave of 16-year-old Dartavious Outsey, who drowned back in 2019. Outsey was the younger brother of one of the Haines City gang members.

"As you can imagine, that was personally offensive, as it would be to any one of us," the sheriff said.

The video escalated tensions between the groups, and between March and May, the sheriff's office said there were 16 drive-by shootings or running gun battles between gang members, which Judd said put the lives of members of the public in danger.

On Wednesday evening, witnesses said 22-year-old Kevin Marcel and three others were in front of a residence in the area of Fern Road and Maggie Circle when a stolen black Infiniti slowly drove past, with the occupants in the car all wearing ski masks. 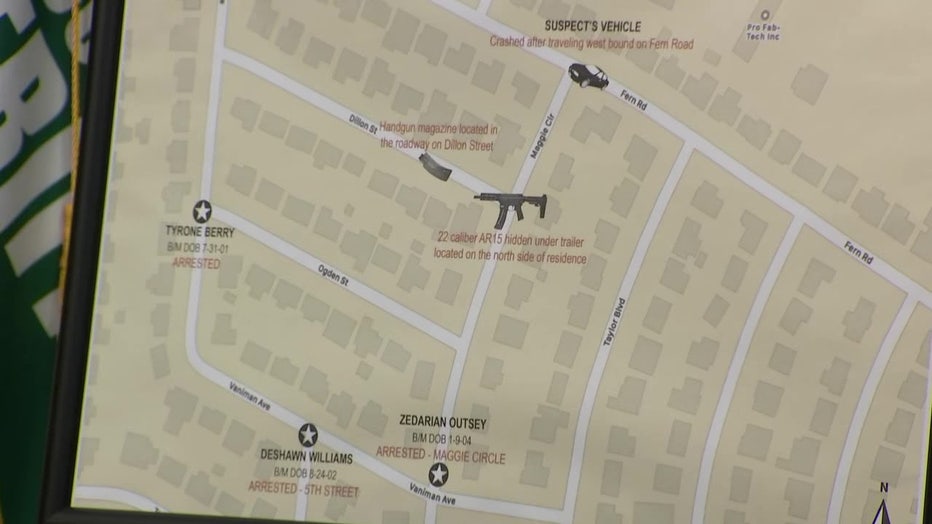 Marcel grabbed a gun to arm himself, and when the Infiniti looped back around, a passenger began firing a rifle out of the rear passenger side window.

That's when investigators said Marcel returned fire, striking the Infiniti and two of the three people inside.

The Infiniti fled the scene, side-swiped a parked vehicle and crashed at a nearby intersection. The three suspects in the car then fled the crash on foot, but were soon apprehended by deputies.

The driver of the stolen car, 18-year-old Deshawn Williams, was transported to a local hospital with two gunshot wounds to his right knee and right foot. After being treated, he was released from the hospital and booked into the Polk County jail.

The back seat passenger, 19-year-old Tyrone Berry, was taken to the hospital with a gunshot wound to his hip. Judd said he needed surgery, and remains in the hospital in stable condition.

The front-seat passenger, 17-year-old Zedarian Outsey, was uninjured, but was on crutches due to a previous gunshot wound. 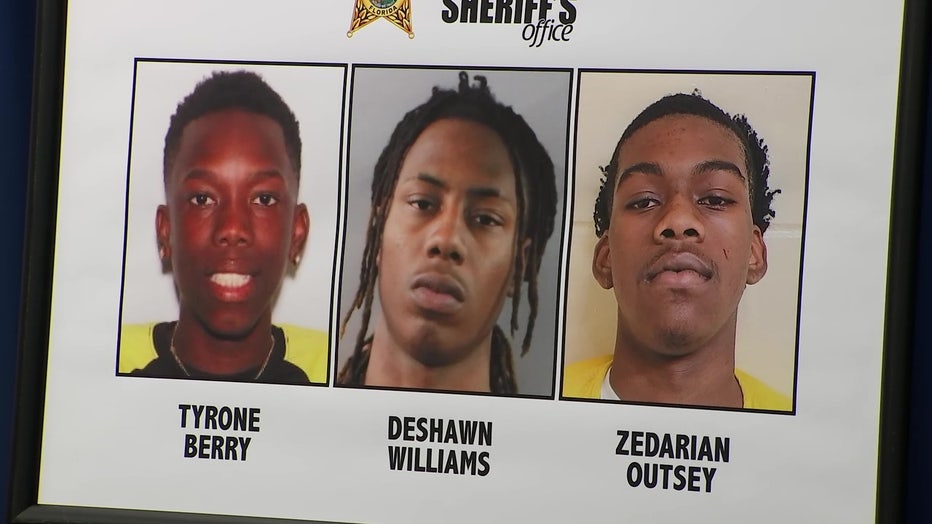 The victim, Marcel, was also arrested for possession of a firearm since he "was found to have committed a delinquent act as a juvenile that would be a felony if committed by an adult," which meant he cannot possess a gun while under the age of 24.

Detectives found multiple ammunition casings around the residence and the crashed Infiniti, and discovered a semi-automatic rifle that had been stashed under a trailer in the neighborhood. The rifle is believed to be the same one from the back seat of the Infiniti that was used in the shooting. The sheriff's office said it had been reported stolen out of Highlands County.

The sheriff's office said the Infiniti had been stolen during a carjacking earlier Wednesday morning from the Tampa Truck Stop on US Hwy 301 in Hillsborough County by a suspect who was wearing a mask.

"I am proud of my detectives for their work in getting these violent gang members off the street," Judd said in a statement. "I want to send a strong message to the community: this kind of violence will not be tolerated in Polk County. We will continue to do everything possible to keep our residents safe."