There is no hiding from fire ants, found all over Florida. Usually, if you want to get rid of them, you have to use pesticides. However, researchers at the University of Central Florida have created a new device that utilizes boiling water.

“It got inflamed for a few days, you could see the welt there,” said Michael Jimenez, Orange County resident.

“It felt pretty bad, I got as rash in the area,” said Jake Penta, Orange County resident.

“It hurt a lot and it was very itchy,” said Allison Malay, Orange County resident.

The painful tales of fire ant bites. It’s safe to say, people avoid them at all costs, Even UCF Ant Biologist Joshua King. 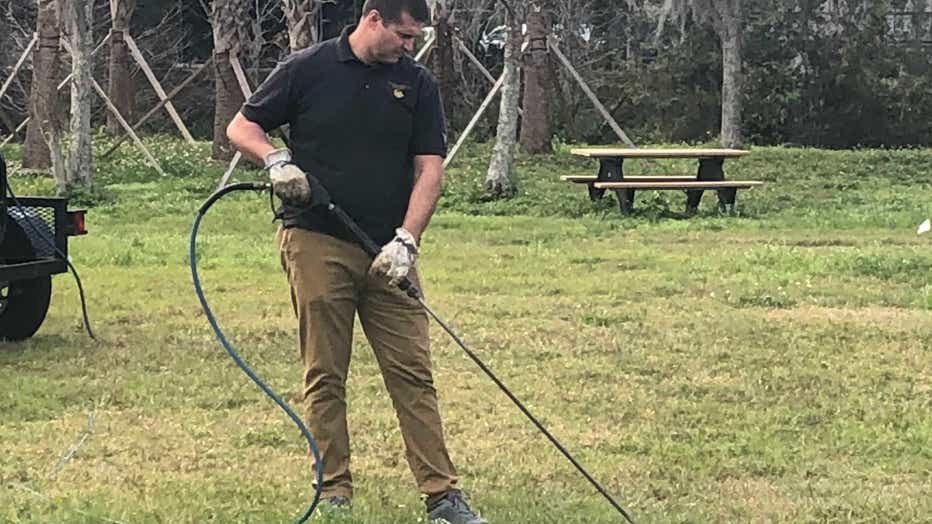 “I’m like everybody else, I don’t love being stung by them, I don’t want them in my face, in my yard,” said Joshua King, a biologist and inventor at UCF. He has studied fire ants for more than 20 years and has now developed a toxin-free way to take-out entire colonies.

The invention is a wand, connected to a mobile water heater that is inserted into a fire ant mound, flooding the colony of up to 500,000 ants.

“[It] allows the water delivery below ground and it’s not destructive to the nest architecture, so we can put the water below ground take advantage of the spaces that the ants create, we fill that space up with really hot water, that’s instantly lethal to the ants,” King said. He went on to admit that he didn’t come up with the idea of using hot water to kill fire ants but his invention wipes out colonies and is portable, stating that “it really was just about how can we apply the water more efficiently and more quickly, so we can kill more colonies in a day."

More importantly, the biologist is proud to have invented the only system that doesn’t use harmful pesticides, which is the current method used. He said that "whenever you put lots of insecticide into the environment, there’s an expectation that there are non-target effects" and that  "there are a number of applications, including schoolyards, where we don’t want toxins introduced but if you have problem fire ant colonies, you want them gone yesterday."

King says his method protects the environment, without compromising effectiveness.

“I have no expectation, this was created as a research tool and we are working on trying to put it out into the commercial market but the end goal here is to produce something useful for people and in this case, helpful for the environment,” said King.

UCF has applied for a patent, it’s still pending. There is no name for the invention, at this time.

Tune in to FOX 35 News at 6 p.m. for more information on this patent.