"It will satisfy all our requirements. A good thing about that is we're going to have one rocket. Simplifies our infrastructure, as far as our processes and how we operate, it's one way of doing everything. Our team can focus on one rocket," said Ron Fortson, ULA’s launch operations director.

The enormous rocket had a long journey to get to Cape Canaveral. Traveling aboard ULA's "rocket ship," the Centaur sailed more than 2,000 miles from ULA's manufacturing facility in Decatur, Alabama, headed down the Tennessee and Ohio Rivers to the Mississippi, and finally to the Gulf of Mexico before arriving in Cape Canaveral. 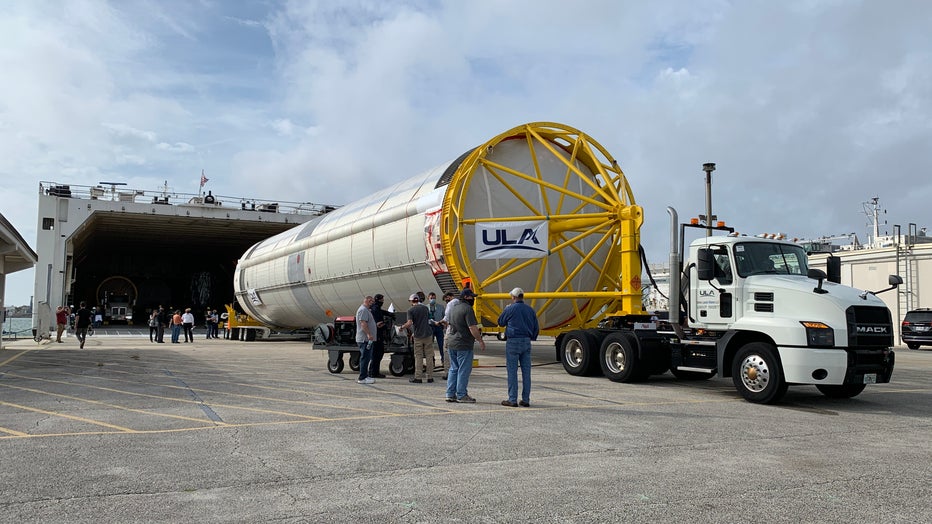 "This is something you take a lot of time and effort to get right. We've been at it for a while and it's good to finally see the fruits of a lot of work from a lot of people because now you see real hardware that's actually out here," Fortson said.

ULA has a purpose-built platform for the Centaur booster. Over the next few months, they'll fuel it up and making sure everything works properly. Once the testing is done, they can start to get ready for actual space flight.

"We needed to make sure we can understand all that so we can incorporate that, all that learning, into the booster that is in production right now that's going to be the one we're going to fly," Fortson said.

Officials said that after they were done testing the booster tank, they would send it back to Alabama where engineers are going to fit it with new equipment and one day it, too, will fly into space.