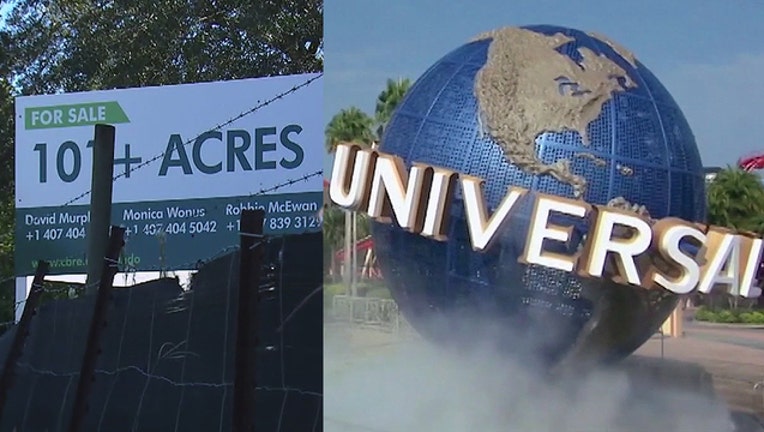 ORLANDO, Fla. (WOFL FOX 36) - Universal Orlando's been on an expansion tear the last few years, including the additions of the Volcano Bay water park and resorts like Cabana Bay and Sapphire Falls. Now, the company is sitting on hundreds of acres of land across Interstate 4 for what seems like even more expansion.

The latest piece of property is right on Sand Lake Road, just east of Kirkman Road.  The company that sold the 101 acres to Universal says this new parcel is right next to 470 other acres the park already owns.

"Universal Orlando Resort has purchased approximately 100 acres of land off West Sand Lake Road. The purchase price was $27.5 million," read a statement sent to FOX 35 from Universal Orlando spokesman Tom Schroeder.  "We are excited for the future, but have no additional details to share now."

Mark Johnston studies the theme parks for Rollins College in Winter Park.    He says there are giant clues out there already as to what Universal may do with the land.

"They're gonna open up 'Nintendo World,' so that's an obvious first choice for them to expand out into this new land," he explains.

A possible Nintendo-themed land seemed to be a hit with the tourists we met on international drive.

"A Nintendo World would be fun actually. That would be a good theme for it for go karts even I think," says David Tru.

The land is more than double the acreage of Universal Orlando now and it will likely include more than one park, plus hotels and retail.  But Johnston says whatever is going to be built will be bold.

"It does make for some interesting discussions," he adds.