In a Thursday letter to the UF community, Vice President and CIO Elias G. Eldayrie told the UF community that the university has been monitoring developments regarding the app, particularly growing concerns over the security risks it poses.  "

As a result, the university is strongly discouraging the use of TikTok," he said. "Prominent experts continue highlighting TikTok as a national security concern, pointing to the possibility that foreign governments may use TikTok to control data collection, influence TikTok's recommendation algorithm, and compromise personal devices." 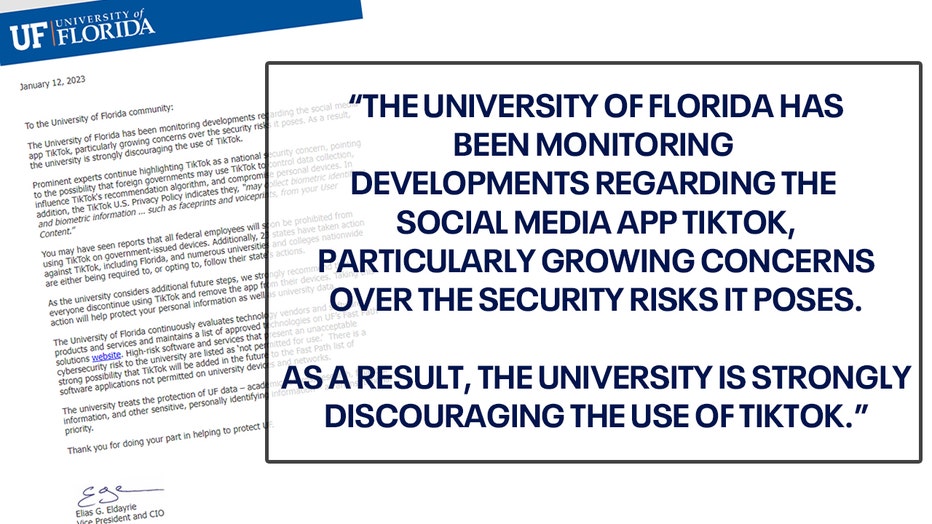 "In addition," Eldayrie wrote, "the TikTok U.S. Privacy Policy indicates they ‘may collect biometric identifiers and biometric information... such as faceprints and voiceprints, from your User Content.’ You may have seen reports that all federal employees will soon be prohibited from using TikTok on government-issued devices. Additionally, 23 states have taken action against TikTok, including Florida, and numerous universities and colleges nationwide are either being required to, or opting to, follow their state's actions."

As the university considers additional future steps, Eldayrie said administrators strongly recommend that everyone discontinue using TikTok and remove the app from their devices, adding that taking this action would help protect students' personal information as well as university data.

The message explained that "The University of Florida continuously evaluates technology vendors and software products and services and maintains a list of approved technologies on UF's Fast Path solutions website. High-risk software and services that present an unacceptable cybersecurity risk to the university are listed as 'not permitted for use. There is a strong possibility that TikTok will be added in the future to the Fast Path list of software applications not permitted on university devices and networks."

Eldayrie concluded that the university "treats the protection of UF data-academic records, research, financial information, and other sensitive, personally identifying information as an institutional priority."

The University of Oklahoma and Auburn University have taken similar measures in recent months as state and federal lawmakers weigh banning the popular video app owned by Chinese company ByteDance.