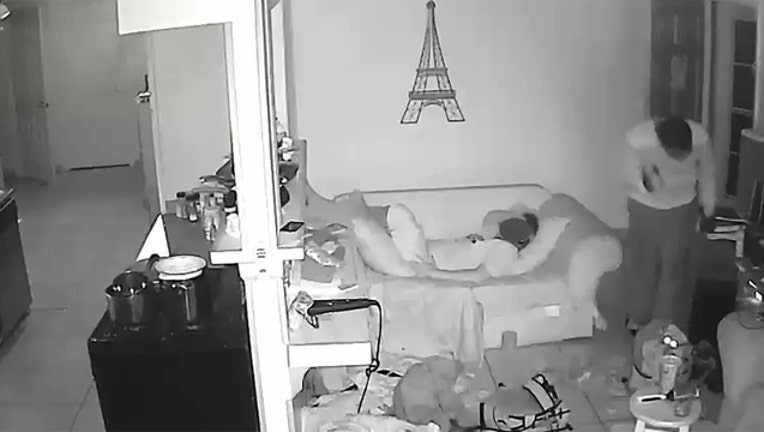 ROCKLEDGE, Fla. (WOFL FOX 35) - Deputies with the Brevard County Sheriff's Office responded to a burglary early Monday morning at a Rockledge home.   The alleged incident, which they say was recorded on a security camera, shows residents of the home asleep on sofas, as the accused burglars creep around them.  SCROLL DOWN TO SEE VIDEO>>>

The video surveillance captured a suspect walking throughout the house, to include in the area near where children were sleeping.  That suspect is described as a black man in his early 20s, standing between 5 feet, 10 inches and 6 feet tall, and wearing a light-colored shirt with stripes.

Another suspect is seen in the video waiting at the doorway with a handgun, accepting the stolen property. The other suspect is described as a white man, wearing a light-colored beanie cap, dark-colored jacket and light colored pants.

A stainless steel, .38 special revolver, was stolen from one of the victims' vehicles.  Deputies said the suspects also took multiple credit cards and a cell phone.

Deputies said a white SUV, possibly an early 2000 model, was observed in the area around the time of incident, which happed around 1:30 a.m. at a home on Matthew Drive.