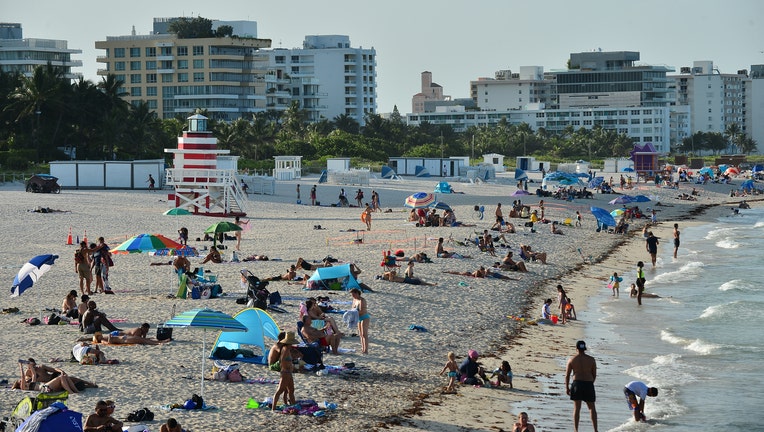 MIAMI BEACH, FL - JUNE 30: Beach-goers are seen on the beach after a mandate to wear face masks in public spaces went into effect on Tuesday June 30, 2020 in Miami Beach, Florida. Miami Beach has issued a mask mandate to anyone in public areas where

TALLAHASSEE, Fla. - Visit Florida President and CEO Dana Young got an 8 percent boost in pay and a $7,500 bonus Tuesday, as leaders of the tourism-marketing agency pointed to Florida being in a "position of strength" against other states trying to emerge from the coronavirus pandemic.

The Visit Florida Board of Directors, meeting in person for the first time in more than a year at the Hutchinson Shores Resort & Spa in Jensen Beach, also directed Young to distribute up to $130,000 in performance raises among staff members.

Young’s salary currently comes from state and private money, with taxpayers covering $120,000. With the vote Tuesday, the board shifted her entire pay to private sources.

"I think it sends a powerful message that it is the private sector in the state of Florida that wants to support our CEO and the work that she's done," said board member Virginia Haley, the head of Visit Sarasota County. "To hear that it was such a careful, fairly long thought-out process, that she is evaluated, she is reviewed, I think should have a level of confidence for our political leaders, that it's been done in a very thoughtful manner."

The staff raises, along with Young’s bonus, also are expected to come from private sources.

Board member Frank Belzer, a former senior vice president of sales for Universal Parks and Resorts, said Florida should be "embarrassed" by its pay to officials of the public-private agency.

"You start thinking about a state like California, without getting into details, a person in Dana's position, they’re probably making four to five times what Dana is making," Belzer said. "And they have wine. And they have industry and they have technology. We have tourism. That's what we have. And we should be embarrassed. And I hope, speaking very freely, I hope this is the first step in this progression of getting the Visit Florida professionals, maintaining the talent that we've developed."

Staff members haven’t seen raises since before 2019, when the agency cut one-third of its staff of 135. That came after the Legislature slashed funding for the tourism-marketing agency by 34 percent.

The board on Tuesday also approved a $121.2 million budget for next fiscal year, with $50 million coming from the state. Another $5 million is calculated into the spending from the U.S. Commerce Department Economic Development Administration through a federal stimulus law known as the CARES Act.

An additional $25 million in federal pandemic stimulus money, through the American Rescue Plan Act, is anticipated but not included in the budget as the state has yet to receive the money.

Private tourism groups and businesses are expected to provide $9.1 million in cash and $54.1 through "cooperative advertising" and other offsetting expenses.

The budget accounts for a $3.1 million operating loss due to a required match for federal funding.

Salaries and benefits for 76 positions total $8.5 million and factor in a 3.4 percent increase in health benefit costs.

Florida’s tourism industry saw improvement during the first three months of 2021, but the number of visitors was still down 14 percent from a year earlier as the state continues to grapple with the pandemic.

But officials said they believe Florida is better positioned for a recovery because of reopening efforts that started last summer, while many other large states are a year behind.

"For a year that felt like much, much longer, Visit Florida and the Florida tourism industry held fast," Visit Florida Chief Financial Officer Staci Mellman said. "We are already leading the Sunshine State into its recovery, and fortunately we're starting this comeback from a position of strength."

The state has spent $18.8 million on marketing the state over the past year, starting with in-state marketing last summer, and is now preparing for international markets as they emerge from pandemic lockdowns, Mellman said.

Florida drew 26.162 million domestic and international visitors from Jan. 1 to March 31, down from 30.4 million tourists during the first quarter of 2020, when the pandemic took hold in Florida as theme parks closed and Major League Baseball cut short spring training.