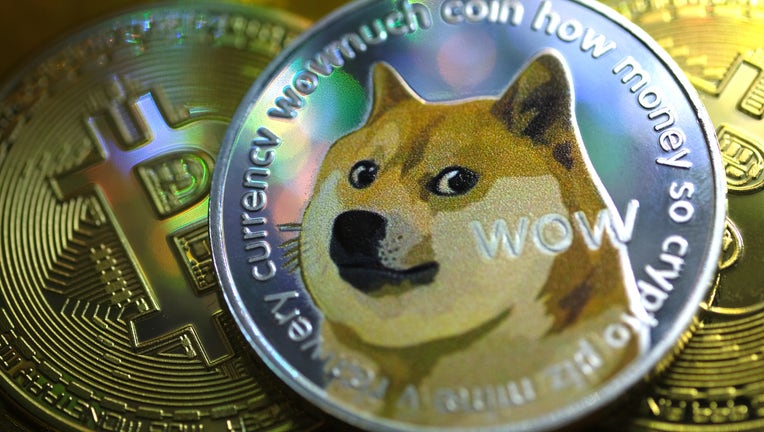 In this photo illustration visual representations of digital cryptocurrencies, Dogecoin and Bitcoin, are displayed on January 29, 2021 in Katwijk, Netherlands. (Photo by Yuriko Nakao/Getty Images)

According to FOX Business, Dogecoin is a cryptocurrency that began as a joke in 2013. It is based on a popular meme and has grown a massive following internationally. It is even accepted by many merchants (with more hopping on).

It is also important to note that Dogecoin has one of the lowest transaction fees and can be used for fast payment transactions, as a result of its astounding technology.

FOX Business explained that CoinMarketCap data shows that the cryptocurrency is listed at about $50 billion and is now a top-five cryptocurrency. As of mid-day April 20, each coin was listed as $.3341 compared to Bitcoin's $55,566.88.

During the surge, FOX Business said that one of the co-founders, Billy Markus, also known as Shibetoshi Nakamoto on Twitter, said that he was able to fully pay off his mother's home equity loan and thanked his followers.

"Called mom. Told her I was able to fully pay off her home equity loan. Lots of tears," FOX Business quoted his tweet as. "That was such a weight, for so long. One step closer to feeling like she can live independently. This is all thanks to you guys. I don’t even know what to say, it’s beyond words. Thank you."

In fact, Cuban's NBA team, the Dallas Mavericks accepts Dogecoin at their merchandise store. On Friday, they said the store put in a 24-hour record for merch sales in Dogecoins.

Cuban previously tweeted, "If I had to choose between buying a lottery ticket and #Dogecoin .....I would buy #Dogecoin."

More merchants are starting to accept Dogecoin. In fact, Newegg, one of the leading tech-focused e-retailers in North America, now accepts Dogecoin as an official payment method.

RELATED: Petition calls for Amazon to accept Dogecoin after its price surge

In addition, more than 130,000 people have signed a petition calling for Amazon to use dogecoin as a payment method after the cryptocurrency saw its price surge last week.

Fans of Dogecoin are touting April 20, long an unofficial holiday for marijuana devotees, as "Doge Day" and imploring each other to get its value up to $1. This would be an astonishing ascent from the roughly half of a cent that a Dogecoin was at earlier this year.

In fact, the cryptocurrency has leaped up more than 8,000 percent for 2021 so far. That towers over the roughly 11 percent return for the U.S. stock market.

FOX Business and The Associated Press contributed to this report.