Hurricane Fiona has strengthened as it begins to move away from Hispaniola. Fiona is moving toward the northwest and this general motion is expected to continue through Monday night into Tuesday morning.

Hurricane Fiona has moved back into the Atlantic Ocean after making two landfalls in the past 24 hours and is once again a Category 2 storm.

Hurricane Fiona made landfall in Puerto Rico Sunday, bringing heavy rain and catastrophic flooding to the island, knocking out its power grid, before making landfall in the Dominican Republic Monday morning. The FOX 35 Storm Team said Fiona will not have a direct impact on Florida as it continues to move towards the northwest but will impact Florida's ocean swell and rip current risk.

The center of Hurricane Fiona was located about 130 miles southeast of Grand Turk Island late Monday afternoon and the storm was beginning to move away from Hispaniola where it has produced "catastrophic and life-threatening flooding." Maximum sustained winds increased to 100 and this trend will continue over the next 36 hours.

"On the forecast track, the center of Fiona will pass near or to the east of the Turks and Caicos on Tuesday," the NHC said.

Forecasters said that motion is expected to continue through Monday night, followed by a turn toward the north-northwest on Tuesday and to the north on Wednesday.  A Hurricane Warning is in effect for the Turks and Caicos. 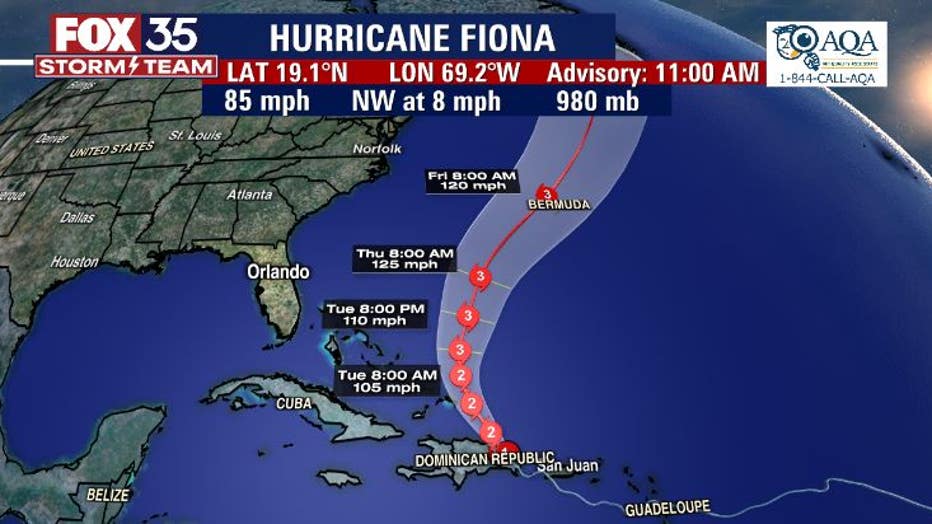 Florida will have an indirect impact from Hurricane Fiona, "meaning an increase in that swell," FOX 35 Storm Team Meteorologist Allison Gargaro said. "Wave heights are going to be very, very large. It's not recommended to enter the surf because, not only are we going to be seeing an increase in that swell, but also a rise in the rip current threat" at all East Coast beaches.

Another indirect impact Florida will experience is a change in moisture. "We've been seeing a lot of that tropical air mass over the Florida peninsula – well a lot of that now is going to be carried out to sea with Hurricane Fiona, and we're going to be left a bit drier as we head into the start of Fall," Gargaro said.

Fiona is expected to strengthen during the next few days after the hurricane emerges over the southwestern Atlantic, and is forecast to become a major hurricane (Cat. 3) by Wednesday.

The FOX 35 Storm Team will continue to track Fiona with our exclusive FOX MODEL and will provide new updates as soon as they come in.