Ceremony-at-sea for Winter the dolphin

CLEARWATER, Fla. - Passing an urn made of Himalayan Sea salt one to the next, staff from the Clearwater Marine Aquarium said their final goodbyes as the cremated remains of Winter the dolphin were released into the Gulf of Mexico Thursday morning.

Aboard the U.S. Coast Guard’s 45-foot response boat, CMA's vice president of zoological care, Kelly Martin, said it was an emotional yet fitting return home for the rescued animal who changed the lives of so many. 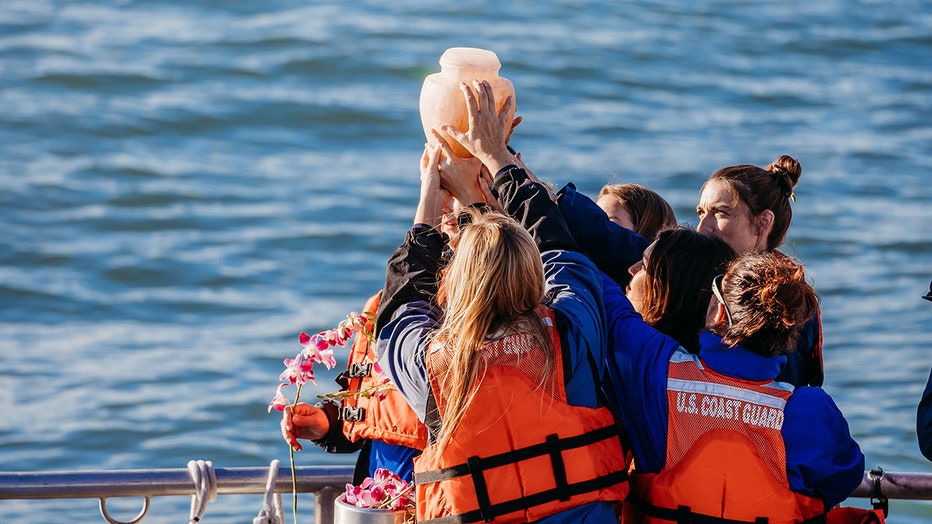 "I’ve had a range of emotions today. It’s been difficult. I had a lot of nervous energy. I bottled up probably all of my tears for the last few months and I was able to release them with my friends, my peers and those who love her," Martin said.

The ceremony-at-sea included a C-130 flyover by the U.S. Coast Guard and a poem read in Winter's honor. CMA staff also spread flower petals and blew bubbles, one of Winter’s favorite enrichment activities. 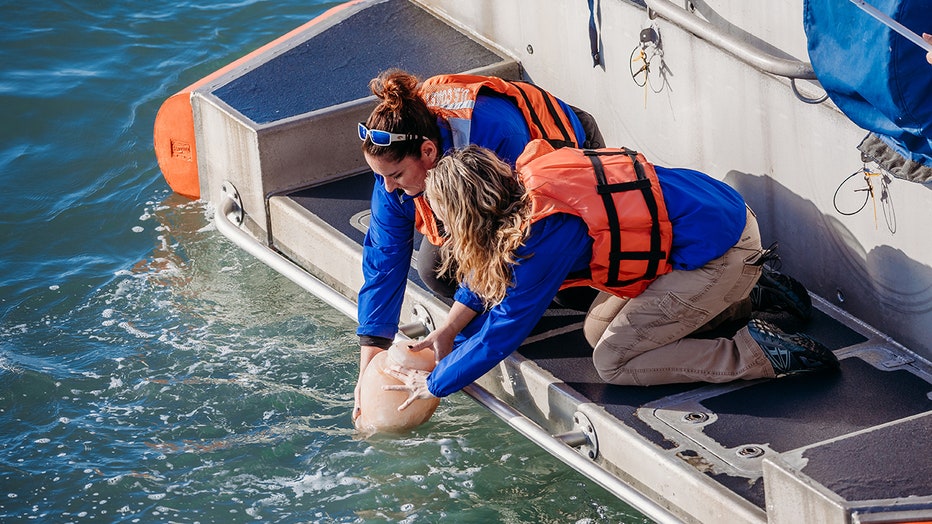 "We cried through that, I’ll let you know, and then we took the urn and passed it from one animal care specialist to the next," Martin recalled.

Winter’s story touched the hearts of millions when she lost her tail after becoming tangled in a crab trap back in 2005. 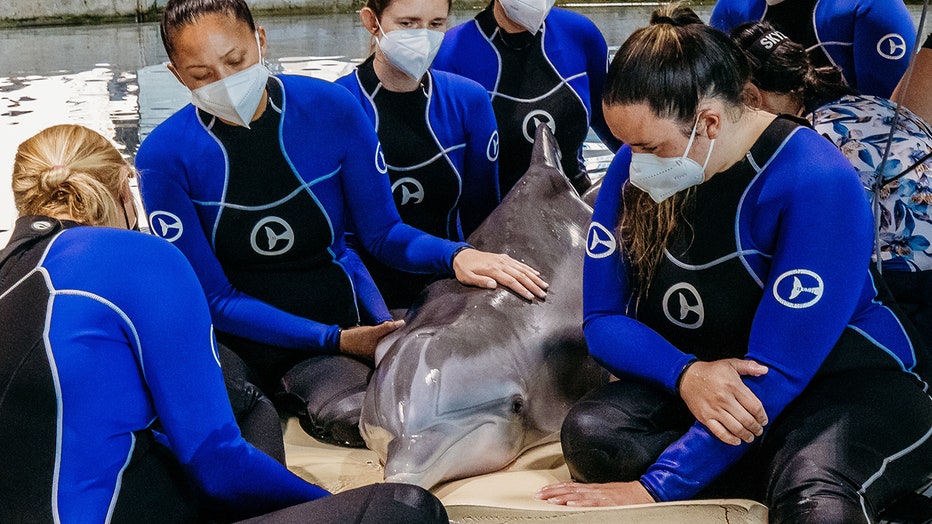 The staff at the aquarium nursed her back to health and oversaw her care until her death at the aquarium due to an intestinal torsion in November 2021. Winter was 16 years old.

Winter thrived after being fitted with a prosthetic fin, inspiring amputees around the world to live their best lives. She also inspired Hollywood to tell her story in the movies "Dolphin Tale" and "Dolphin Tale 2."

"Winter connected the community and not just here in Clearwater but nationally and internationally," Martin said. 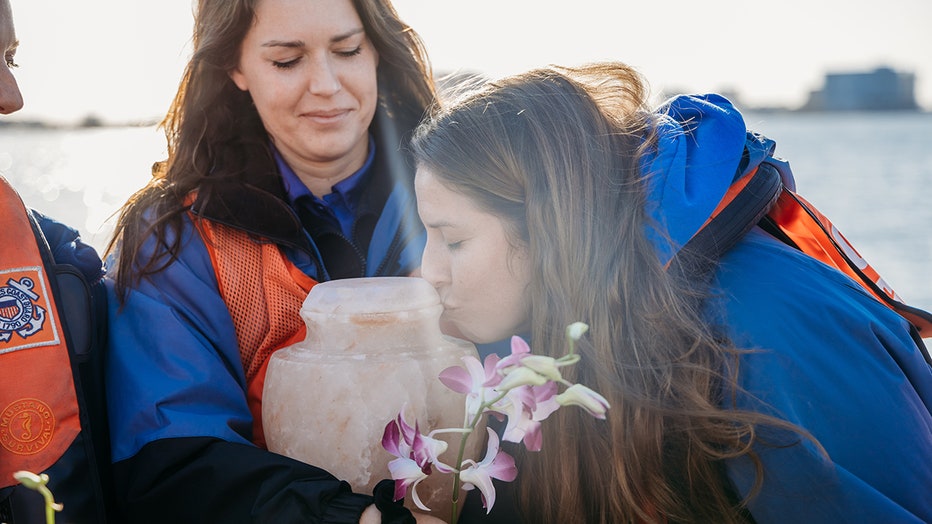 Winter’s story has uplifted and inspired people around the world. She beat the odds to survive and is not limited in life by her injury. After coming to the Clearwater Marine Aquarium in 2005, a team of experts worked to develop a prosthetic tail for winter, the first of its kind.

The completely custom-design tail evolved over a three-year period, from just a brace to a functional prosthesis. CMA said Winter adapted to her new physical form and made a complete recovery, learning how to swim like the other dolphins.

For those using prosthetics, Winter's inspiration will live on

For people across the world who use prosthetic limbs, the inspiration to overcome all obstacles starts with a dolphin named Winter.

MORE: ‘We’ll always carry her legacy with us’: Those inspired by Winter vow to uplift others in her honor

"I spent weeks in there just studying anatomy, physiology of a dolphin," said Dr. Dan Strzempka, certified prosthetist at Hanger Clinic.  "And then we kind of came up with the idea that we're going to do."

Strzempka helped design and manufacture the prosthetic tail.  He said the first challenge was figuring out how to keep the tail on Winter underwater. The next was creating a liner to help her stump with the pressures of the prosthetic. 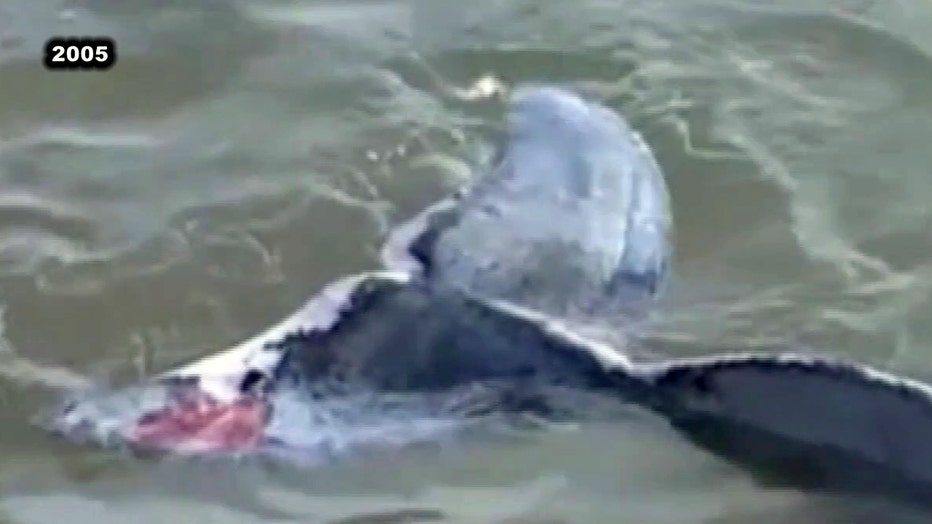 Photo showing Winter's damaged tail after her rescue in 2005

"We needed something stickier. And also her skin couldn't tolerate the forces that the humans can. So we had to make something a little bit more elastic or stretchy," he said.

The result was WintersGel Prosthetic Liners. An invention that has helped countless other amputees over the last 15 years, including Maja Kazazic.

David Yates took the helm at Clearwater Marine Aquarium weeks after Winter the dolphin was rescued from a crab trap. He speaks to FOX 13's Cynthia Smoot about her inspirational story, her prosthetic tail, and how the "Dolphin Tale" movie came to be.

"Due to my injuries, and extent of them, and the type, there was nothing out there that would allow me to walk pain-free," she said.

At 16, the Palm Harbor woman survived a bomb explosion during the Bosnian War. Kazazic escaped the country with her life but lost most of her left leg.

Years later, Kazazic met Winter.  There was an instant connection through the glass, and seeing how strong and resilient the dolphin was with her new tail made a lasting impact.

Winter the dolphin was an aquatic ambassador here in the Bay Area, inspiring thousands around the world – especially those who also faced hardship and challenge. Now, with her recent passing, many in Clearwater and around the world have reacted with heartache.

"And I remember sitting there, I was like, feeling sorry for myself. I remember thinking, wait a minute, I mean, if she could do this, if they could do this for her, I should be able to do the same thing. And from that instant, my life changed," said Kazazic.

And she is not alone.  Winter has inspired other amputees and people with disabilities, folks who can relate to the injury and see Winter has no limits.  They have made pilgrimages to meet her, and she has changed people’s lives for the better.

"Anyone that's overcoming obstacles," Kazazic said, "can really learn a lot of lessons from Winter."