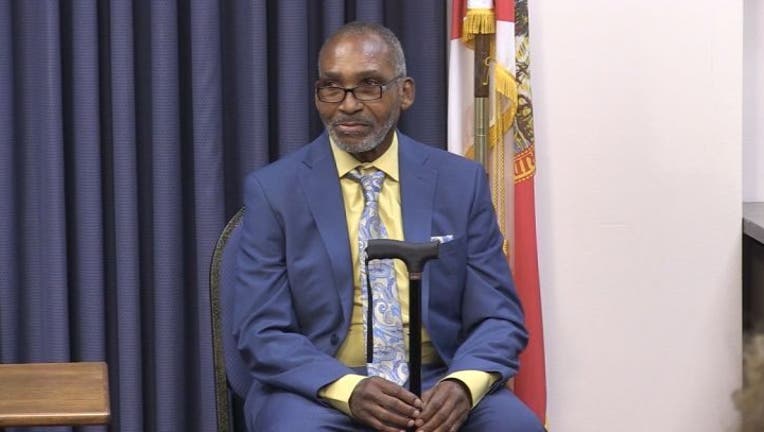 The highest-profile bill (SB 28) will compensate Clifford Williams, who was sent to prison for a 1976 murder, including serving a stint on Death Row, before being cleared last year.

“Mr. Williams has been steadfast in his belief that justice would prevail in the end,” Senate Minority Leader Audrey Gibson, a Jacksonville Democrat who sponsored the legislation, said in a prepared statement Tuesday. “Today, the governor honored that long-held faith.”

Williams was convicted along with his nephew Hubert Nathan Myers. Both were released last year after the Conviction Integrity Review Division, created by 4th Judicial Circuit State Attorney Melissa Nelson, found their claims of innocence credible and identified another man who had confessed to the killing. That person died in 1994.

Under a Florida law passed in 2008, people who have been wrongfully imprisoned and who can prove their innocence are entitled to $50,000 for every year they were incarcerated, up to a maximum of $2 million. A court determined Myers was eligible for such compensation. The law, however, excludes people like Williams who had prior felony convictions.

That resulted in the move to pass the bill to compensate Williams during the legislative session that ended in March.

Meanwhile, two of the bills signed Tuesday by DeSantis are linked to the ongoing planning for three multi-use corridors, including new or extended toll roads, that would stretch from Collier County to the Georgia border. The projects, known as multi-use corridors of regional significance, or M-CORES, have been championed by Senate President Bill Galvano, R-Bradenton.

One of the bills (HB 969) sets aside up to $5 million a year for Florida’s Turnpike Enterprise to develop broadband infrastructure as part of the effort to spur new or expanded toll roads.

The measure also shifts broadband policy responsibilities from the Department of Management Services to the Department of Economic Opportunity and creates a Florida Office of Broadband to develop, market, and promote the services.

The other roadway bill (SB 7018) directs the Department of Transportation to plan and build staging areas for emergency response along with the turnpike system, with a priority in “counties with a population of 200,000 or less in which a multi-use corridor of regional significance is located,” according to a Senate analysis of the bill.

Supporters of the measure argued that larger counties already have airports and business centers that can be used to stage disaster relief.

The measure also requires the Public Service Commission to work with the transportation department and the Department of Agriculture and Consumer Services, to develop electric vehicle charging stations along state highways.

“As Florida moves forward from the coronavirus, economic development opportunities like M-CORES, and the jobs created both during and after construction, will be critical to our recovery,” Galvano said. “I am hopeful all elected leaders, local, state and federal, will continue to focus on infrastructure planning as we move toward recovery. We cannot afford to take a step back from economic prosperity and technological advancement in rural communities.”

Critics of the bills during the legislative session focused mostly on opposition to the toll roads, which they warn will lead to Broward County-style sprawl for people who want to live in small communities and will devastate already-endangered wildlife.

DeSantis also signed a measure (HB 743) that revised a 2019 law that was meant to crack down on opioid abuse by requiring health care practitioners to discuss non-opioid alternatives with patients. The law also required practitioners to provide people with a state published pamphlet on opioids.

The Florida Medical Association also flagged concerns with the 2019 law and sent a letter to the Department of Health Secretary Scott Rivkees seeking his interpretation.

Many of the bills signed Tuesday were “local” bills, which address issues within specific counties or municipalities, such as a measure (HB 423) to allow the town of Ocean Breeze in Martin County to hold public meetings outside its boundaries.